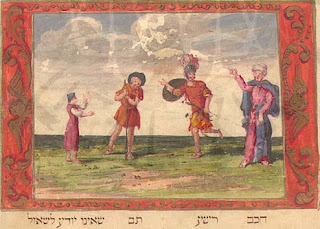 The Gemarah tells us Shoalin V’Dorshin Shloshim Yom Kodam HaPesach… 30 days before Pesach, we should ask and expound upon the laws of Pesach.

Immediately after dealing with the four sons, the Haggada tells us when we are required to fulfill the Mitzva of Sipur Yitzias Mitzrayim… the exodus story. Part of this requirement includes teaching it to one’s children. V’Higaddita L’Vincha.

The paragraph begins by saying Yachol MeRosh Chodesh… One might have thought we should have begun doing so at the beginning of the month of Nissan and then informs us “BaYom HaHu”…that no, we do it on the day of Pesach itself.

The question arises, “Why assume that we begin with Rosh Chodesh in the first place?” There is no indication that this day has any significance? If there is any assumption to be made let’s go back 30 days as is the case for studying Hilchos Pesach?

The Mefarshim ask, Why didn’t he do it and not before that? The Mechaber answers. It depends. Mi SheNishal… If one asks about the laws of Pesach, we are required to do so 30 das before the Chag. But if no one asks, than we begin by simply expounding on the laws of Pesach two weeks before.

And this is why the Haggadah precedes this portion with that of the fours sons. The last son is the “SheEino Yodeia L’Shoel”. He is the one who does not know how to ask. At P’sach Lo. We simply just tell him.

Taken From Torah L’Daas
Posted by Harry Maryles at 2:41 PM