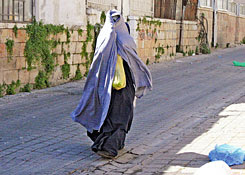 No the woman in the photo is not a Muslim. She is Jewish. And very Tzanua… modest! We finally have women wearing Burkas. For those who don’t know what that is think... those black clad fully covered women of Iran or Afghanistan. The typical fundementalist Muslim woman in those countries cover themselves up from head to toe in what amounts to a tent. But one picture is worth a thousand words. All you have to do is look at the picture accompanying this post of a religious Jewish woman taking a stroll in the streets of Jerusalem.

Lest anyone think that I believe that this is the wave of the future, I fully realize that this particular woman’s clothing style is not about to catch on widely with the observant public any time soon. But it does tell me that all the ultra Tznius talk coming out of Charedi Rabbaim in Israel is catching on with some who are now taking it to an extreme.

There are women out there who have been so indoctrinated by this type of talk that they fear that any type of clothing at all that makes a woman look…well... like a woman, is actually forbidden by Halacha to wear. The idea behind this type of clothing is to hide her physical form. When one particular woman was asked by a reporter why she wanted to wear this type of clothing she answered that, as a religious woman, she did not want men to stare at her so she covers up. It did not occur to her that this is not what the Torah meant for her to do.

This is surely a function of not knowing the Halacha and taking what Rabbanim have said and done recently in matters of Tznius to an extreme. But it is also a function of not getting properly educated in the Halachos and Hashkafos of Tznius. Relying on Psak and terse explanations does not substitute for education. Instead it can sometimes result some bizarre behavior. I doubt that there is a Posek in the world that says a woman is not allowed to wear clothing that shows her figure at all.

It is so ironic that right in the middle of all the attention to sex crimes within Orthodox world in the media we find a story like this…. where Tznius is taken from the sublime to the ridiculous. These women are as serious as a heart attack in taking the Halacha of Tznius to such extremes.

What ever happened to normalcy?

In theory there should be an exact modesty standard for all segments of the Torah observant community. But I understand that each community has its own Halachic interpretation of that… each with their own Poskim. Some communities are more stringent, others are more lenient. But there ought to be some common sense out there even for the most stringent of communities. There is such a thing as too Tznius. The photo above demonstrates that.

Even in those communities whose Poskim take Tznius to severe standards, there ought to be a point where one can go too far. It can only bring ridicule to Judaism if this were pointed out as any kind of legitimate standard. The Poskim of that community ought to stop it.
Posted by Harry Maryles at 1:21 PM