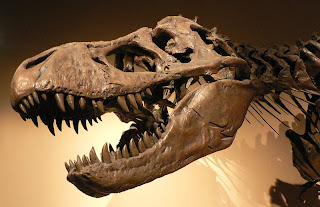 I hate when that happens. But it is probably happening more now than ever. This is the kind of teaching that can drive away many a rational thinker from observant Judaism. A short post by a father on Beyond Teshuva about his a six year old son illustrates what I am talking about.

His son who has an interest in dinosaurs was told by his Rebbe in Yeshiva that dinosaurs never lived. That the bones were just planted in the ground when the world was created.

The father wrote that he kind of just agreed in order to avoid conflict with the Yeshiva and asks how others would handle it. That is an excellent question.

I suppose for the moment this young boy walked away relatively satisfied. But will this answer sit well with him as he progresses in life? This issue will certainly come up again at a later age and he will very likely not be satisfied with the answer he got now as a six year old.

The one thing I would not do is corroborate what this Rebbe said without explaining that there are other legitimate explanations that allow for an ancient universe. And that would help explain the existence of dinosaurs and their extinction. The older he got and the more questions he asked after that – the more I would try to explain it to him – taking into account what the Torah and Chazal teach us and what science has to offer. I would not deny the validity of either. Denying the validity of science risks losing your child to heresy.

There are unfortunately many skeptics created every day in this way. They will get on the Internet and see information that contradicts much of what they’ve been taught as inviolable fundamentalist truths. It seems clear from everything I have read that a Rebbe who dogmatically insists that the universe is less than 6000 years old and then refuses to answer difficult questions about it can eventually cause many a religious student to abandon his Judaism.

If a Rebbe plants into the mind of a child the idea that the world cannot be more than 6000 years old and that believing in an ancient universe is tantamount to heresy – he can easily be planting the seeds of heresy into that child. If not now then later when he sees clear evidence of an older universe and the existence of dinosaurs at one time in history.

This does not mean to say that one cannot believe that the universe is less than 6000 years old. And that it was created to look old - dinosaur bones and all. But it should be a choice from among many options that deal with the realities of nature.

This is how I believe all matters of conflict between science and Torah should be handled - should they arise. Children must be given real options in dealing with these matters that will neither contradict science or Torah. In those cases where there seems to be irreconcilable conflict one should acknowledge it and say that one does not have a good answer.

I would add that just because one cannot reconcile the science and the Torah – that does not mean that they are irreconcilable. It just means that we are lacking in our ability to do so at this time. Further study of both science and/or Torah may ultimately provide us with reconciliation between the two. We need to give it time while remaining with a question. Not all questions have immediate answers. Some may never be answered.

I believe that there are many Mechanchim like the Rebbe in this story. They refuse to acknowledge a different approach other than the most fundamentalist one. That dogma is being presented as a hard and fast tenet of Judaism. Instead of progressing in the real world and dealing with science in a rational manner as do many Orthodox scientists, we are regressing into a primitive and ignorant view of science – treating it as though it was all a bunch of lies perpetrated by scientists who by their nature are atheists with an agenda to sell atheism as fact.

But that is simply not true. There are many scientists who are atheists but there are many respected scientists who believe in God. There are even Orthodox Jewish scientists who are not only knowledgeable in science but knowledgeable in Torah as well. They are the ones who do the best job in reconciling science and Torah. Their views are the ones that should be taught – right along with the more fundamentalist views currently being taught. It’s all about presenting legitimate options.

Though I have mentioned his name many times, Rabbi Arye Kaplan is the best example of that. He scoffs at those who think the universe is less than 6000 years old. And yet he is accepted by the Charedi world as one of their own. Views like his about the age of the universe and other related matters should be a mandatory part of the curriculum in every Yeshiva that teaches even a single science course.

The phenomenon described by this father is a relatively new one. I don’t think that was the direction we were going in before ‘The Big Ban’. I am of course talking about the ban on Rabbi Natan Slifkin’s books – calling the views expressed therein heretical. Until then views like Rabbi Kaplan’s were becoming quite mainstream and acceptable. But now - these views have been deemed heresy. That may be what the scenario described by this father represents.

I don’t know how to counter the trend. But I do know that if we don’t then we will over time multiply the numbers of skeptics from religious backgrounds. I only hope that this man’s son doesn’t become one of them.
Posted by Harry Maryles at 11:55 AM