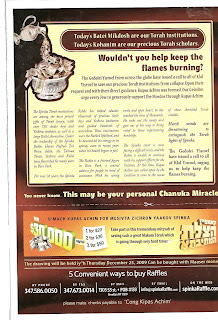 I can understand the attempt to support worthy institutions (Mosdos). That is what various rabbinic leaders have signed onto in a 2 page ad that appeared in this week's Mishpacha Magazine. (Images courtesy of Marty Bluke.) If the institutions are truly worthy they should be supported and not allowed to fall.

The institutions that the rabbinic leaders are asking the Jewish community to support are those run by Spinka and founded by the Rebbe himself. The Spinka Rebbe is not an evil man. In fact I believe that his life has been dedicated to doing good in the world of Torah. And his institutions are a probably reflection of his efforts.

Unfortunatley in his zeal to fund them he made some very foolish mistakes. Mistakes which an Ehrliche Jew should not make - let alone a prominent Chasidic leader. He actually believed that it was permitted to cheat the government out of taxes for purposes of supporting those institutions. By doing so he did raise significant amounts for his institutions. Funds which I am sure were – and still are - badly needed. But raised illegally.

But his calculations were obviously very wrong. No amount of justification in the world can make up for the Chilul HaShem that resulted. In the process he embarrassed himself, his institutions, and by association the entire Torah world. He was caught red-handed and convicted. He is now serving his sentence.

The ad in question asks that we continue to support the Rebbe’s Mosdos because of "the extreme difficulties he is facing now". He can therefore not even help his own cause at the moment.

In my view this call for help is misguided. Not because those institutions are unworthy. They may very well be extremely worthy. But I cannot in good conscience agree with this call by these rabbinic l 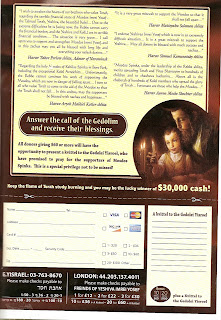 Here is what I believe would be the right call.

If these institutions are indeed worthy - they should be divested of any connection to Spinka and be supported. The infrastructure can remain the same - but let them become a part of another Chasidus or entirely independent. If they are not worthy institutions, well then of course they should not be supported at all.

At this point, the name Spinka has been dishonored by its leader. Had he been incarcerated for anti Semitic reasons and false claims of dishonesty, I would be the first in line to support it. Even if one is not normally a supporter of Spinka institutions, I would nonetheless urge everyone to run to their aid without any reservation. It would be a Kiddush HaShem to do so.

As it happens, the Spinka Rebbe was guilty of a crime which has resulted in a major Chilul HaShem. I would therefore not give a penny to anything with the name Spinka on it or anything remotely associated with it!

There is a right way to do things and a wrong way. Worthy institutions should be seen independently of their founder and the name associated with it. But that will not be how the rest of the world will see it. And that may contribute to the Chilul HaShem. There should never be any appearance by the Torah world of supporting criminal activity. The only way to support those Mosdos is if they divest themselves of Spinka. If the Spinka Rebbe wants to do the right thing here, he should be advocating for that himself.

Hat tip: Marty Bluke
Posted by Harry Maryles at 10:51 AM