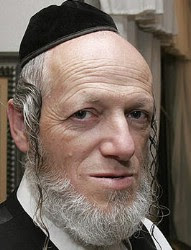 Yet another tragedy strikes the world of religious Jewry. The Jerusalem Post reports that an 8 month old girl was brutally beaten to death by her father, a Jew living near the Meah Shearim section of Jerusalem. While the circumstances are far from identical this reminds me of the Meah Shearim mother who allegedly tried to starve her infant son to death a while back.

But I don’t think there will be any protest about his arrest. At least I hope not. No sane individual in the world that would defend this man. He is either criminally insane or one of the worst Reshaim of modern times. But that does not stop people from the world of the right from saying some of the most outrageous things about anyone who dares to challenge the system in reaction to this tragedy – that dares to question the leadership of this man’s community.

After having to deal with the infant, even people like Meshi-Zahav find it difficult, overcome with strong emotions and hopefully, a “cheshbon nefesh” as he puts it, the need for the chareidi community to finally come to terms with some harsh realities, realities that we prefer not to admit to ourselves.
He added that perhaps there are issues that are more important than the Chilul Shabbos issue at Intel. As a card carrying member of that community he supports their stance on the issue, but he questions the focus on that versus the paucity of focus on the kinds of problems that this tragic event represents.

He explained others involved in this kind of work are aware that in the chareidi community, some of the urgent issues, the problems that no one wishes to discuss, are not addressed appropriately - the issues that are ignored in the hope they may disappear, or at the very least, escape the scrutiny of the public eye.

When asked what one can do, he explained a good start would be to prioritize, explaining that while the battle for kedushas shabbos must maintain prominent significance, there are things more important than Intel.

A recent protest against microprocessor giant Intel drew 4000 people and many prominent Charedi rabbinic leaders who addressed them - among them: Eida HaCharedis leader, Rav Yitzchak Tuvia Weiss, the Admor of Toldos Aaron Shlita, Rav Moshe Sternbuch, and Rav Michal Yehuda Lefkowitz among others.

The protest was about Intel being open on Shabbos. I am not convinced that Intel has done anything wrong and it has been reported that they even agreed to not use any of its Jewish workforce on Shabbos. But they were still protested in huge numbers. I guess they would just like to see the plant closed on Shabbos. I suppose they have a right to try and get that accomplished via peaceful protest. And to the best of my knowledge - this time it was relatively peaceful.

But what about the truly serious problems that Meshi-Zahav refers to? Why is that not the focus of these Rabbanim? One might answer, “What are they to do?” “This father was obviously insane and murdered his daughter.” “That is certainly not their fault.” “How were they to know he was going to do that?” “Can they be blamed for the insanity of any individual in their midst?” “Stuff happens!”

Of course that’s true. But I trust the judgment of this good man. There are serious problems in their community that their rabbinic leadership is not focusing on – certainly not as much as they have focused on Intel.

Meshi-Zahav is responsible for so much Kiddush HaShem. He is about as Charedi as they come. And yet he is being vilified by his own people. All kinds of accusations have been thrown at him calling him a publicity hound and other – perhaps worse names for than that. Why? He dared to challenge the system. His Daas Baal HaBayis challenged the Daas Torah of his very own community.

How dare he?! Here is a comment at YWN that reflects that attitude:

Who put this mechutzaf, Mr. Meshi-Zahav, in ANY position to expound opinions on daas torah? We b”h have gedolei yisrael, who are to be consulted on each and every issue, and not a word is to be uttered that has not received full cleaerance and backing from our gedolim! If the great gaonei hador - Harav Tuvia Weiss,The Toldot Aharon Rebbe, The Belzer Rebbe, Harav Moshe Sterenbuch, Harav M.Y. Lifkowitz, Harav Tzadkah, Harav Shlesinger Shlit’a - were the partcipants in a protest against Intel, who is this peanut-brained shababnik (who is not known for his great hatmadah or bekiut) to say, especially to an anti-chareidi media outlet (hungry for any little bit of venom against the chareidi tzibur), that “we do not need Intel (protests)”?
It’s all too unfortunate that often these top dogs in otherwise commendable organizations, such as Zaka, let the media attention get to their heads. They seem to think that their klal work positions them to become “deah-zoggers” on everything from abuse to zero-tolerance in the Orthodox community. What a great kiddush Hashem it would have been if when querried by reporters from the non-religious world for his input on what-not he would instinctively retort: I have nothing to say, since we will only follow what are torah leaders say. Instead, they unfortunately fall into the trap of kavod and gaavah, offering terribly skewed opinions and advice.

We must know that there was never a time in Jewish history when there weren’t trouble makers and troubled individuals. Even when Moshe Rabbeinu was our leader we had korach, datan and aviram, the erev-rav who caused great trouble and chilul Hashem. And it was the same during the reign of Yehoshua, and Kings Shaul, David and Shlomo, and the list goes on, through the biryonim at the time of the churban, zedokim-baitusim, etc. So it’s not any different today. We don’t have any apparatus for blocking out all deranged and abusive individuals from our midst. But, as the result of our being made a better people through the study and implemetation of the Holy Torah, our record is light years ahead (better) than any other group.

It’s sad to see the slanderous and venemous way in which many responders (comments) jump on any little tragic story that happens in our community that has any connection to abuse or criminal activity. Right away these poisonous snakes attack the entire chareidi community, and issue all kinds of pearls of wisdom for changing around the whole stucture of leadership within it. And this YWN wbsite will have a great accounting to give in shamayim for giving these corrupt comments their forum for discussion.

Need I say more? I guess the only thing I would add is that I respectfully disagree with Mr. Meshi-Zahav. The primary problem is not that his Gedolim are focusing on the wrong issue. While that is true there is a far greater one. It is that this commenter represents the thinking of a very large segment of Charedi Jewry – perhaps even the majority. They are not the moderate Charedim. They are on the very far right of the Charedi world. Does this man reflect the ‘wisdom of the Torah’? He certainly thinks so.

This is how a great many people in Meshi-Zahav’s world have been indoctrinated to think. Their current rabbinic leaders do absolutely nothing to discourage it. They in fact encourage it. This commenter has shown himself to be a ‘soldier for the cause’. He may have been a bit over the top even according to them. But not by much!
Posted by Harry Maryles at 11:20 AM