Torah Thoughts for the Seder 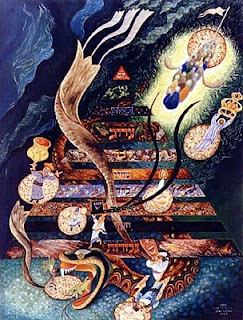 As Pesach quickly approaches I offer 3 short Divrei Torah for the Seder.

On the night of Pesach there is a Halachic requirement of Sipiur Yitzias Mitzrayim - the retelling of Exodus story. This is done via the Haggadah. At the very beginning of the Hagadah we are told ‘All that extend the Exodus story are praiseworthy’.

But the Shulchan Aruch tells us that we should speak about it all night – ‘until sleep overtakes us’ (OC 481:2)? This makes it a Chiuv - a requirement - and not simply praiseworthy?!

The Ksav Sofer answers with the following. The requirement of Sipur is only when Matzah and Maror lay before us. Although others say that the Mitzvah requirement of eating Matzah lasts throughout the night - Rabbi Elazar Ben Azarya holds Matzah is eaten only until midnight (Chatzos). As explained in the Gemarah in Pesachim (120b) - Matzah is compared to The Korban Pesach – the Paschal lamb. Since that may only be eaten until midnight so too - the Mitzvah of eating Matzah lasts only until midnight.

The very next segment in the Haggadah is a story about Rabbi Elazar Ben Azarya and his colleagues relating the story of the Exodus all night indicating that the previous segment is in line with his views.


Pesach in Bnei Brak of Old

Rabbis Eliezer, Yehoshua, Alazar Ben Azarya, Akiva and Tarfon are mentioned in the context of Sipur. Why specificly is a story told about these individuals?

The answer is given by the Chida. Each of these individuals had a uniqueness about them. Their ancestors were either Kohanim, Levi’im and Gerim. R’ Yehoshua was a Levi. R’ Alazar ben Azarya and R’ Tarfon were Kohanim, and R’ Akiva was the son of Gerim. Their ancestors were not slaves. One might think they are exempt. But they are not. They must retell the Exodus story too.


Staying Up All Night

The Hagadah relates that these great Taanaim stayed up all night reciting the Exodus story they continued doing so untul their students interrupted them to tell them Zman Kriyas Shema had arrived. They had to Daven Shachris.

The question arises why did these Taanaim continue Sipur Yitzias Mitzrayim until Zman Kriyas Shema? The Mitzvah continues thought the night – which ends at Alos HaShachar, when the morning star arises? Zman Kritas Shema doesn’t begin until later at a time where daylight begins to appear over the horizon? That leaves a gap where they were not doing that Mitzvah at all. Under what context did they continue to do Sipur?

An answer is given by the Birsker Rav. He says that at the end of the night these rabbis started learning the laws of Pesach. He held that one can fulfill the Mitzvah of Sipur by doing this. Once the morning star appeared, they simply continued learning for its own sake until theiri students interrupted them with a reminder that Zman Kriyas Shema was here. And one interrupts learning to say Kriyas Shema as the Gemarah in Shabbos (11a) states.

Links to other Divrei Torah for the Seder from my archives:

Invitations to Join the Seder

Reclining at the Seder

The Wise Son and the Simple Son

Blessed is the Promise Keeper

Saying Hallel at the Seder

Crossing the Red Sea
Posted by Harry Maryles at 2:40 PM