People that read this blog regularly know of my admiration for centenarian Charedi leader, Rav Aharon Leib Shteinman. He is an Ish Emes. A man who tells it like it is, despite popular opinion, or the consequences to himself. This – among other things – is what makes him a leader in Klal Yisroel. But as people also know, I have had some profound disagreements with him.

While Charedim consider it near heretical to disagree with a Charedi Gadol, I don’t. As long as one does it with respect, one has a right to his own view. I can’t even imagine denying a view deeply held even by a Charedi if he (or she) feels strongly about a given matter. Just because it differs with a man they consider to be a Gadol.

And yet most Charedim seem to do exactly that. They are Mevatel (nullify) their own Daas (wisdom) to that of the Gadol.  I won’t do that because I can’t. If I believe strongly in something, then the only way I will change my mind is if I can be shown the error of my ways. Telling me that a Gadol disagrees with me won’t sway me. Now one can discount my views if they think they are unworthy compared to those of a Gadol. One can say that since my knowledge of Torah is minuscule compared to that of R’ Shteinman it is therefore worthless. That is their right. They can take my view for what they think it’s worth. But it wont change my mind. 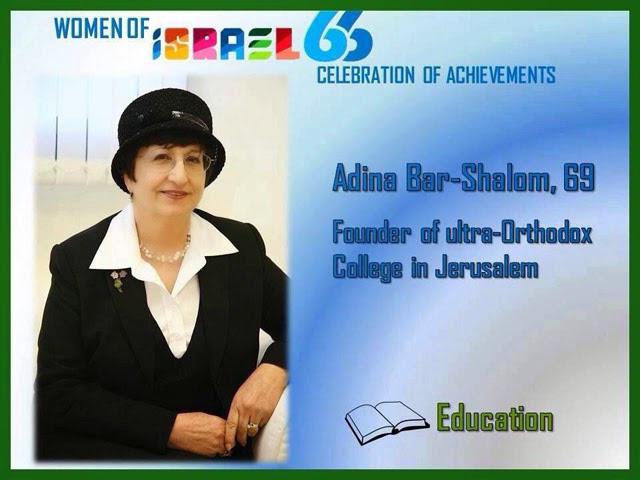 And this is once again the case with a new Psak by R’ Shteinman. Hadrei Haredim – Hebrew edition reports that Rav Shteinman has paskined that women are forbidden to attend any degree granting institution.  Even a Charedi college like the one created by Adina Bar Shalom (Rav Ovadia Yosef’s daughter). He actually mentioned her by name in his Psak.

I’m not sure why this came up now. Nor do I quite understand his strident opposition. But I do know that such Halachic decrees could not come at a worse time.

Most people know that Charedim are the poorest demographic in Israel. Well that statistic has gone from bad to worse. From the JerusalemPost:

(T)he poverty rates among the ultra-Orthodox populations increased to 66% in 2013 from 60% in 2012.  The reason for this the report cites, is due to a lack of increase in employment rates, low earnings, and the cutback in child allowances.

It makes absolutely no sense to prevent people from helping themselves. If he believes that women that attend universities will somehow be led astray by what they study there and go OTD, how much more so should there be a fear of children going OTD from family dysfunction caused by poverty?

Getting a degree in a field that will enable women (and men) to find better paying jobs should be something that is encouraged, not forbidden. I believe that Rav Ovadia Yosef, ZTL approved of his daughter’s Charedi college. He understood that there is a serious need for such institutions in the Charedi world. In my view, he was absolutely correct.

There has been some discussion in various media about the futility of large families getting out of poverty even with good jobs. That a family of 12 or 13 children (not so unusual among Charedim) would need incomes well in excess of what even a high paying job pays. That well may be true. But does that mean that they shouldn’t even try to better their lives with an education that could provide better jobs? Maybe it won’t pull them entirely out of poverty, but it will certainly help.

There are those that have said that since the Charedi poor get welfare payments from the government it is actually financially beneficial to not have jobs that will increase their income. That their increased earnings will reduce or entirely eliminate the government welfare. Well,that ship has sailed. At least a good portion of it has - since the Israel’s budgetary needs have required them to reduce spending. Some of which were in the form reduced child allowances and lower subsidies to their schools.

And what about self respect? Does the Charedi mindset value taking charity over self reliance? Is the idea of Torah study for all Charedi men for as long as possible and taking charity better than earning a living that would obviate that?

It is not that I think all Charedim should work and abandon full time study. I support it for the best and the brightest. But the idea that everyone should opt for it as a first choice is counterproductive to the material and even spiritual welfare of God’s Chosen people. I don’t think that God wants every man to deny his God given capabilities and sublimate them in pursuit of a lifetime of Torah study that he is no best suited for.

But even if one disagrees and says that all men should try to learn Torah full time for as long as possible, how can their wives or future wives be denied an opportunity to earn a more respectable income for the family? Why condemn the most devout Jews among us to a life of poverty and taking charity – if there is a way out?

There are those who might say that good jobs can be found in other ways… or that the skill learned in college can be learned just as well outside of college or even as apprentices while on the job. Perhaps in some cases. But not in all. It is certainly not the most efficient way to do it. It limits opportunities for them.  Besides, isn’t it better to learn it to learn it in a more standardized and recognized way than it is to learn it in haphazard non recognized ways?  A degree will open more doors for them than simply attaining the knowledge in nontraditional ways.

As for the fear of women going OTD…I don’t see how a Charedi college is going to be a venue for that anymore that the workplace she may end up in. And yet, Rav Shteinman has forbidden it to women in very strong terms. I just don’t get it!
Posted by Harry Maryles at 10:43 AM