A Vote for Trump is a Vote for Clinton 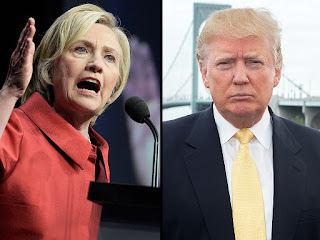 Is this the end of the Republican Party? I never thought I would be discussing politics as much as I have this year. But there has never been anything like this political season in my memory, which goes back at least 50 years. The candidates that seem to be the most inspiring are a Socialist on the Democratic side and Megalomaniac showman whose experience in governing at any level is about the same Donald Duck’s.

This is unprecedented. On the Democratic side, sanity will prevail. Socialist Bernie Sanders is unlikely to be the candidate despite his unexpected popularity and win in the New Hampshire primary. The polls strongly indicate that Hillary Clinton will eventually get the nomination.

On the Republican side, I am beginning to wonder if the host of the TV reality series, ‘The Apprentice, is unstoppable”. Donald Trump is on a roll. He has won almost every primary so far except one over his chief rivals, Marco Rubio and Ted Cruz. The polls indicate that he will win most of the 12 Super Tuesday states in next week’s primary. He is ahead in a national poll among all Republicans as well. Trump is even ahead of Rubio in his home state, Florida.

What in the heck is going on?! This makes absolutely no sense to me. I realize that people are ‘mad as hell and are not going to take it anymore’. But is voting for a megalomaniac like Trump going to make them any better off if he becomes President? I don’t see how any sane person could believe that, if judged by the way he has behaved in this campaign thus far. Is it possible that Trump will insult his way into office?

And yet to a large number of Republican voters, he can do or say no wrong. Every time I think he is toast after some outrageous comment or insult, I am proven wrong by a strong win in a primary.

No matter how I have tried to explain his popularity as a reaction to the way the government is being run, at the end of the day, I still don’t get it. The man is unqualified to be the leader of the free world. His rhetoric may sound great: He will destroy ISIS. He will restore prosperity. He will end Obamacare. He will tear up the nuclear deal with Iran. He will make peace between Israel and the Arabs. He says he going to be the deal maker of the century.

He is however good at insulting minorities. He is good at throwing insults at his opponents when they point out his failings. He is good at making inappropriate and insulting remarks about a reporter that asks him a question he doesn’t like. Can anyone imagine a foreign policy based on that kind of mentality? Should a man like that to be trusted to have his finger on the nuclear button?!

This all seems like no brainier to me. The man is so unqualified, that if he is elected, it would setback US standing in the world to unprecedented levels. And who knows what kind of danger he would bring to this nation.  I do not think I am exaggerating.

Which brings me back to the Republicans that support him. I cannot figure out why they are letting their emotions overcome their intelligence. It's one thing to send a message in a primary or two. But it is way beyond sending messages at this point.

Even if the Republicans supporting Trump actually believe that he is the best man running to be President, they have to understand that he cannot win the general election. Mrs. Clinton must be thrilled that Trump is in the lead.

I am going to make a prediction. If he is her opponent, he will lose badly. He will very likely lose every single state. I don’t see any Democrat voting for him. Nor will many Republicans other than those that voted for him in the primaries.  He will lose badly.

Republicans that would normally vote for a conservative Republican like Rubio and realize how truly unqualified Donald Trump is, will run to Clinton if Trump is the nominee. I will surely vote for her if he is. I have not met too many people whose political views are like mine (center-right) that would even consider voting for Trump.

Do those Republicans voting for Trump in the primaries not realize that to vote for Trump is to vote for Clinton? Do they actually think he has a chance against her – even with all of her negatives? I guess so.

If this happens. It will be the end of the Republican party as we know it. I don’t think it can survive a Trump nomination that will lead to what I believe will be the biggest drubbing of any Presidential candidate in my lifetime. And I include George McGovern in 1972 who lost every state (including his own) except for Massachusetts and the District of Columbia.

However, it is not too late for Republicans to think this through. Even those who actually like Trump and think he will make a great President, have to know that he will not win in the general election.  If they want someone that has a real chance to do so, they should think ‘Rubio’. He may not be their ideal candidate. He may be the ‘establishment’ candidate. But that does not make him bad.  And compared to Mrs. Clinton, he is gold. I hope cooler heads prevail. Because if they don’t, mark my words. There will be another Clinton in the White House. And Democrats will be filling that office for a long time.