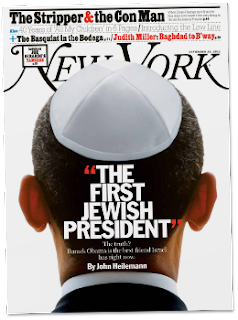 “I cannot imagine a greater expression of Christianity than to say, I, too, am a Jew.”  This line was uttered by someone many people think is not a friend of the Jewish people. But I contend now as I have in the past that the person who made this statement is a true friend of the Jewish people, despite my profound differences with him on some of his policies, especially as it relates to Iran.

President Barack Obama made this comment in an address given in the Israeli embassy, the first American President to do so. It was to honor Roddie Edmonds, a righteous gentile – a Tzadik who laid his life on the line to save the Jewish members of his platoon in a prisoner of war camp during the Holocaust. When asked to identify the Jewish members, he answered, ‘We are all Jews’.

It is this kind of righteousness that personifies the American spirit of equality ensconced in the Declaration of Independence  which says, ‘All men are created equal’.  This is the kind of thing that represents what’s right about America. It represents values that we should all strive to live by.

The question is, what about us? What about Orthodox Jews? Are we proud of who we are? Or do we wish to diminish or dilute our differences? Should we try to ‘blend in’? Or should we wear our religion on our sleeves? ...or more correctly, on our heads?

I must be honest, I had once thought that identifying as a Jew, especially an Orthodox Jew by wearing a Kipa was at best a questionable exercise. Why advertise you are Jew? Is the Kipa what Judaism is all about? Is it looking Jewish that counts in God’s eyes? Shouldn’t Judaism be judged by our behavior, our ethics -  not by what we wear on our heads?

Adding to my misgivings is the possibility that as human beings, we Jews are not always on our best behavior. Often far from it. When we have a bad moment - when our guard is down  we night say or do something that we will later regret… and do so as an identifiable religious Jew. Why not avoid that kind of possibility by taking off our Kipot in public and blending in? It would be win/win. If in any given moment we don’t ‘behave’ in public as we should, we will not embarrass our people - and in the process create a possible Chilul HaShem. And if we do something praiseworthy we can make sure that we identify ourselves as religious Jews.

And yet the wearing a Kipa (or more correctly covering one’s head) has evolved into a Halachic requirement in our day. (It was not Halacha in Talmudic times although there were many Jews that did cover their heads). The question is why? I think the answer might be that it is a statement of pride. Pride in who we are. Wearing a covering on your head is done as a sign that there is a God above us. It  is supposed to remind of that and to realize that the whole world is watching us. And that we should always act in ways that reflect our standing as God’s chosen people.

But it is a two sided coin. On the one hand you have the burden of trying to make a Kiddush HaShem – sanctifying God’s name in every act you do. And on the other hand - as human nature will sometimes have it - you have the potential to make a Chilul HaShem. Being a Jew is not easy. But the level of  difficulty does not relieve us our obligation to sanctify God’s name.

What about identifying as a Jew when that poses a danger to us? Well, Pikuach Nefesh trumps all Halachos except for murder, idol worship, and biblically defined adultery.  (However, B’Shas  HaShmad, in times of forced conversion, we are not allowed to violate even the most  minor Halacha.)

This question came up in France recently where Jews were advised to remove their Kipot in light of the frequent attacks against them there. I do not have an issue with those who decided to do so for fear of harm.  Jews are being targeted for being Jews. Not a single one is asked to convert before they are attacked. At the same time, since not every Jew is involved in imminent attack, is that enough of a reason to remove your Kipa? Is the potential to be attacked, even if it is less than 50% enough to justify hiding your Judaism?

I was in this predicament once. I had to walk through some of the most dangerous neighborhoods in Chicago on a Friday night exactly 24 years ago. Through a series of delays my wife ended up landing at Midway Airport  before Shabbos began. Midway is 18 miles away from my house.

I thought I had made up to meet with her and we would drive back until the last minute before Shabbos and then walk the rest of the way. My wife told me not to bother – that she would deal with the problem herself. Although I thought she understood that I would come, she thought she made it clear that I shouldn’t.

We missed each other, she landed and started walking herself, eventually accepting an offer by a very kind black lady who went way out of her way to take her home on a cold Friday night.

By the time I realized I missed her, it was Shabbos.  Since I did not want to spend Shabbos in a hotel all by myself, I was determined to walk home, despite the dangerous neighborhoods I would have to walk through.

Those neighborhoods had three kinds of buildings on the street I traversed: bars,  churches, and abandoned ‘bombed out’ buildings. People were in the streets, making a lot of noise, getting drunk or buying drugs.

I thought for a moment that I might have a better chance of surviving that walk if I wasn’t wearing a Kipa. But then I thought that this was not the best time to abandon my faith in God. So I wore it all the way through. No one touched me, although I did get a couple of looks. I must have made quite a sight as the only white person openly displaying his faith on a Friday night walking quickly through a neighborhood famous for gang murders to this day.

I came home tired and in pain from walking at such a quick pace. I was sore for about a week. And then life went back to normal.

I now wear my Kipa proudly in public and no longer think I would be better off not wearing one. I try my best not to make a Chilul HaShem although, I must admit that I don’t always succeed. But I try to be conscious of how others see me as a Kipa wearing Jew. And I hope that most of the time, I succeed.


I believe that pride in expressing who we are has paid off. Despite all of the negative news that individual religious Jews are responsible, we are largely an admired people. And It is why the President said that in times of crisis for the Jewish people, we are all Jews. It is the verbal equivalent of putting on a Kipa. That the President of the most powerful nation on earth has said that in spite of all the criticsm he gets  is something we Jews – and all  of the American people - can all feel good about.  I am truly proud to be a Jew and proud to be an American.
Posted by Harry Maryles at 11:05 AM