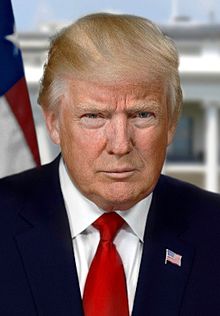 Just a little over 8 years ago, I publicly offered my congratulations to President-elect, Barack Obama. This was just after he won the election in November of 2008. It was a seminal moment in our history – being the first time an African American was elected to this high office. Even though I did not vote for him at the time, I was reminded why I was so proud to be an American.

We can all debate President Obama’s legacy. Depending upon one’s particular political perspective, he will be considered a success or a failure. But one thing I think any fair minded person will say about him is that - agree or disagree - he fulfilled his responsibilities with the dignity that this high office deserves.

Today we inaugurate a new President. Donald J. Trump will be the 45th President of the United States.  This day is one of the things about this country that is truly great. We are witnessing the peaceful transition of power. We the people of the United States have done the same thing today that we did 8 years ago. We voted for an elected the man that will lead us. Just as we did 8 years ago.  We are now witnessing the passing of the baton. Despite how some people feel about him, Donald J. Trump will be everybody's President.  I therefore congratulate him and wish him success in achieving his goal of ‘making America great again’.

What concerns me here is something that did not concern me then. President Trump’s political philosophy (at least presumably) is much closer to my own. Whether that will translate into policies that reflect that philosophy remains to be seen. I do however trust that as a novice to political office he will rely heavily on his advisers that do have experience. Most of whom have more or less the same political philosophy that President Trump has. At least in most cases.

What concerns me most is The new President’s lack of dignity. His approach to making his opinions known to the public has been through Twitter. And many if not most of the more quoted tweets have been knee jerk ‘putdowns’ of people that have criticized him to one extent or another. This is not how I imagined the man that occupies the Oval Office should be acting.

To say that the new President lacks dignity is an understatement. The mere fact that I am saying this is something I could have never imagined saying. How is it possible that a man who is best known for uttering the words ‘You’re Fired!’ is now the President of the United States? Had anyone asked me whether the host of this reality show would ever become President, I would have laughed my head off. I’m not laughing now.

My hope still is that the President will rise to the occasion… that he will somehow find a way to be more dignified.  Based on what past Presidents have said, the job is nothing like anyone imagines it is… even if those imagining it are experienced politicians that have held high office. As such it humbles you once you are in and realize it. If anyone needs a little humbling, it is the new President. I hope he rises to the occasion. Even though he said he will continue to ‘tweet’. My hope is that as President he will stop doing things like that (especially in the way he does it) and thereby continue the tradition of dignity that past President have given it.  I am quite aware of the skeptics who doubt things will change. That is a very real possibility based on the fact that he promised to continue. But until now he was just a private citizen. Now he is the leader of the free world with all the responsibilities that entails. Maybe even Donald trump will be humbled by that.

But today is not a day to worry about that. Today we celebrate the peaceful transition of power. Like him or not President Trump should be allowed to start his Presidency with a clean slate. Forget about what he said (or even what he will say).  Let’s start looking at what he will do.

There are some people so upset by Mr. Trump that they will deny him his moment. They have been protesting and will continue to protest him based on his awful rhetoric of the past. And in some cases protests are about protesting his politically conservative agenda.  They have rejected the President as anathema to their values.

They have that right of course. Their feelings are understandable. I too have felt that way about his speech and his behavior. But their protest is ill timed and premature. Now is the time to give Donald J. Trump his moment. Which he has earned. Instead of protesting now we should all be offering a prayer on his behalf. If there was ever a time we needed to pray for the success of a President, this is it. Here is my prayer:

May God grant Donald Trump the wisdom to lead this country wisely.  May he work to realize this nation’s great potential. May he be successful in achieving peace and prosperity for this nation and the world. May he not only make this country great again, but to assure its continuity as the greatest democracy the world has ever known. God bless the United States of America.
Posted by Harry Maryles at 9:16 AM