The Travel Experience from Hell 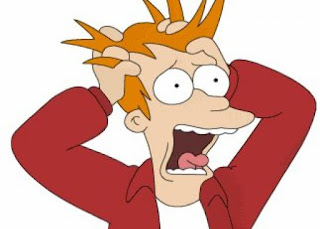 It’s 3:00 in the morning and I am still unable to calm down from what my wife and I went through today. (Well, by now it was yesterday that we went through it.) So I thought since I couldn’t sleep anyway, I may as well write about it. I will be too stressed out and tired to write about anything else. So here goes.

My wife and I are currently in Boynton Beach, Florida, staying in the beautiful new home my sister in law and her husband just bought. They invited us to stay there if we go to Florida this year – as we usually do every winter for a few days.  So we took them up on their offer. What could possibly be wrong with that, one might ask? Well it’s not the place I’m staying in that is hell. It is how I got here.

We left home at 6:45 am for a 8:45 am flight at Midway Airport. My sister in law was gracious enough to give us a ride which is about a 45 minute drive from our house. She dropped us off in plenty of time… and drove off. That’s when the trouble began.

As we were checking our bags curbside, the attendant told us our flight was canceled. The next flight would be a 3:00 pm… to Kansas City - where we would catch a flight to Fort Lauderdale. So there we were at 8 am looking at 7 hour wait until my rebooked flight took off. After contemplating just sitting in the airport for 7 hours - we decided to take the train into the loop and maybe do a little shopping.

We got back at about noon ready to go through security. Which is usually a breeze for us since we have a TSA pre-check. Except that this time I was randomly pulled out of line for a more thorough screening. I was ex-rayed and that set off a ton of red flagged for some reason. That led to my being patted down by the security agent and a check of my hands for explosives residue. Guess what? The result was positive! That agent then called over a senior agent who took me into a private room for a more thorough pat down. While he was doing that, a third agent did a thorough search of everything I had with me – practically tearing it all apart! After that humiliating experience I was finally cleared for release.

We finally boarded our flight to KC and arrived there at 4:30 pm to be told that our flight was delayed for about an hour and a half. We finally took off and arrived in Ft. Lauderale at 10:15 pm – instead of the 11:00 am time we were supposed to be there.

At which point we found one of our bags missing. It seems it was mis-tagged under someone else’s name. We surmised that because there was a bag there with our name on it that was not mine. That bag had my Talis and Teffilin in it!

Now normally I NEVER check my Talis and tefilin. Too valuable to take a chance on losing it. I always put it I my carry-on. But since I had a 7 hour wait, the bag was heavy, Curbside baggage attendant in Chicago asked us if we wanted to check it, I thought, just this once, I’ll check it. What are the odds that it will get lost this one time?!

Big mistake!
So I have no Talis and Tefilin to daven in later this morning. Who knows when – or even of I will get it back! Or if I will get reimbursed for the entire loss should they fail to find it. (It also had my wife’s very expensive Shaitel in it.)

To make matters even worse, our off site car rental place was closed by the time we finished reporting out missing luggage. It was around midnight and I was fit to be tied. We had to re-book a rental car at the airport at a much higher rate!

We had originally planned to go out to eat in Boca Raton after we got settled in Boynton.  But by the time we actually arrived in Boynton 14 hours later, it was 1:00 am. We hadn’t eaten anything all day long except for some potato chips and popcorn we bought… and the peanuts distributed to the passengers on the flight.

And now I can’t sleep thinking about what I’m going to do in the morning about Davening. And worrying that I will never see my bag again.

Needless to say, I am worn out and frustrated. And the thunderous storm taking place outside right now isn’t helping either. Can’t even think about sleeping with all that noise.

Just thought I’d share my frustration with my friends.  It helps to talk about it. Thanks for listening.


Post script. It is now 5:30 am and I haven’t slept a wink. What a way to start a vacation! It’s depressing to say the least.
Posted by Harry Maryles at 4:43 AM