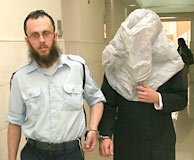 Once again we see the arrogance and now... even the stupidity... of some of our Orthodox brethren.

There is an article in today's Ha'’aretz about a young Charedi man that was arrested for killing his infant son... something that he later admitted to. But his Charedi community, refusing to accept his admission of guilt, immediately threatened violence if this "dear gentle young man" wasn'’t released. They are calling his arrest an "evil conspiracy" devised by the "evil regime". So what else is new?

When is the Torah world going to realize that not all is well in Camelot? When are they going to understand that the government isn't always automatically wrong? When are they going to realize that their society produces the same percentage of aberrant behavior as the rest of society? And most importantly when are they going to do something about the hooliganism that passes for rightous indgnation? Please note the police officer who is handcuffed to the defendant. He is pretty Charedi looking. Apparently he didn't think there was an injustice here. Don't these Charedi hooligans realize how stupid they look and what a Chilul HaShem they are making?

The Charedi system is broken and Charedi leadership knows it. They ought to face the facts, admit the problems exist and stop trying to spin their way out of it. But most importantly they have to impress upon the Charedi masses to stop acting like a bunch of primitive savages every time they don't like something the government does.
Posted by Harry Maryles at 9:48 AM