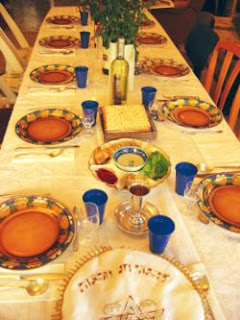 I have established a tradition here preceding every Yom Tov of offering some Divrei Torah pertaining to that Yom Tov. Pesach is certainly no exception. Only instead of doing it Erev Pesach, I do it now - a few days before to maximize the opportunity for all to see before Pesach begins. Time permitting, I will post additional Pesach Torah during the next few days.

The following based on the Torah of Rabbi Joseph B. Soloveitchik* - as I understand it.

One of the important Mitzvos is that of the rabbinic requirement of Heseiba (reclining) while one eats Matzah or drinks wine. The Shulchan Aruch (472:7) Paskins: One who is required to recline while eating and drinking and does not do so is not Yotzei - he has not fulfilled the requirement. He must eat or drink again while reclining.

The reason that one cannot eat Matzah and Marror together in the first place is based on the Gemarah Pesachim (115A - Tosphos and Rishonim). Matzah is a D’Oraisa - a biblical commandment. In our day Maror is only a D’Rabbanan - a rabbinic requirement. The rabbinic requirement of Maror is becomes a Reshus – a non required but permitted act in relation to the D’Oraisa of Matzah. By eating them together - the D’Rabbanan of Maror will then void the D’Oraisa of Matzah.

In a related Gemarah (Rosh Hashana - 28B) we are told that if one is forced by others to eat Matzah one has fulfilled his requirement - according to opinion in the Gemarah that Mitzvos do not require Kavana -intent. Here too the question arises: How can one be Yotzei? Again, there was no reclining? And even if he was forced to recline, doing so under duress is not Derech Cheirus - the way of free men - which s the whole point of reclining. Futhermore, according to Rishonim who say that one cannot be Yotzei eating the Korban Pesach, Matzah, and Maror without saying the three paragraphs of Pesach, Matzah, and Maror, what about the fact that he didn’t say those three required paragraphs?

The Mitzvah of reciting Pesach, Matzah, and Maror is explained in a Mishnah. It is based on the Pasuk of V’Amaretm Zevach Pesach – say the Pesach sacrifice. Tosephos connects Matzah and Maror to the Korban Pesach… and Rabbenu Chananel points out that contained within the Mitzvah of Matzah is the Mitzvah of Lechem Oni SheOnen Alav Devarim Herbeh - ‘bread’upon which many things are answered.

There are then two distinct requirements Matzah: The Mitzvah of ‘B’Erev Tochlu Matzos’ which is primarily the eating of the Matzos and the Mitzvah of Lechem Oni upon which many things are said which requires an act of saying the appropriate paragraph.

Eating the Korban Pesach has similar aspects. There is the requirement from the Pasuk of of VeOchlu Es HaBasar BaLailah HaZeh – and eat the meat on this night, and the requirement of VeAmartem Zevach Pesach.

These Mitzvos are tied together with the Mitzvah of Sipur Yitzias Mitzrayim via an act - as indicated by Rashi and the Rashbam. It is the act which gives the indication of Geula - redemption.

And it is for that reason that Matzah requires the act of Heseibah. Just as the Rambam explains that dipping the Maror into Charoses is the act by which Maror is reminds us of the mortar. In all three cases- The Korban Pesach, Matzah, and Maror, this is how Sipur Yetzias Mitzrayim is fulfilled.

It appears from this that the two Chiuvim are independent. One is Yotzie each independently even sans the other. It is possible to be Yotzei B’Erev Tochlu Matzos even though one was not Yotzei the Sipur Yitzias Mitzrayim that is tied into it. So when one is forced to eat Matzah one is Yotzei B’Erev Tochlu Matzos but not Yotzei Lecham Oni SheOnen Alav Devarim Herbeh because one did not say Pesach Matzah and Maror.

Similar to that is the case of Heseibah - the basis of which is Sipur Yitzias Mitzrayim and is tied into the Mitzvah of Matzah. When eaten without Heseibah, one must eat it again with Hesiebah to be Yotzei the Sipur tied into it.

So in a case where one forgets to recline after one first eats Matzah… if he then eats Matzah again with Maror, he was already Yotzei the basic eating of ‘B’Erev Tochlu Matzos’. He just hasn’t yet been Yotzei the Lechem Oni of Sipur Yitzias Mitzrayim. So as far as the eating itself goes, it is entirely a Reshus with respect to the Maror whose basic eating requirement is still unfulfilled. It is only the Sipur that is missing and that is unrelated to Maror.

Based on this understanding we can now answer why Rav Shlomo HaKohen’s solution won’t work. The primary mitzvah of B’Erev Tochlu Matzos was already fulfilled. The second eating is a din in Sipur which makes it a total ‘Reshus’with respect to Maror which is a still a Chiuv D’Rabbanan. By eating them together, the Maztah of Reshus now comes and voids the eating of the Maror.