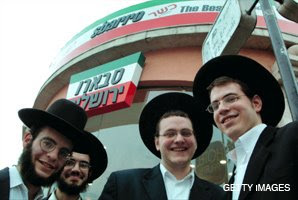 There is a fascinating review of the book Flipping Out by Miriam Shaviv in the Forward. Miriam Shaviv is an Orthodox journalist for whom who I have much respect. Everything that I recall reading by her demonstrates objectivity, intellectual honesty, and piercing analysis.

Flipping Out is about the year of study in Israel and it has generally been given favorable reviews. That book concludes that young people who spend a year in Israel do not in fact flip out – that the year in Israel is actually a very valuable growth experience for young people. They become more serious about their Judaism and more careful about Mitzvah observance.

That of course is wonderful news. What serious Jew - Charedi or Centrist - wouldn’t want his child to become more serious about his Judaism? The claim is that these young people tend to stay within their Modern Orthodox communities but just do so more religiously committed. But is that universally true? Are there some who also reject their Modern Orthodox Centrist Hashkafos as well? If so - how many? I’m not sure this book adequately answers these questions.

For those who do go to Israel there are differences in how these two communities experience their time there. Charedim see it as just another step along the way in a Hashkafa that is already a part of them. Young men seek Yeshivos like Brisk based on their reputation in Torah learning alone. Young women will seek Charedi Bais Yaakov like seminaries.

They too may be indoctrinated further to the right than even most Charedi parents would expect. But it is just a matter of degree - not Hashkafic change. For Charedi young women, the focus is about preparing them for marriage and reinforcing the goal to seek young men who will to the best of their ability stay in learning as long as possible - a goal they already have.

But for Modern Orthodox students, it’s an entirely different ballgame. They go to Israel one way and often come out another. Modern Orthodox yeshiva high schools send their graduates to schools that specifically cater to them. But not in the way most parents think they do. The process there is one of conversion.

The schools are geared to shake off the Modern Orthodox Hashkafos and replace them with Charedi ones. Of course the young men spend most of their time learning Gemarah the same way a Charedi does in his Yeshiva. And the young women also learn subjects similar to their Charedi counterparts. But the Hashkafa imparted to a Modern Orthodox student – both male and female - is definitely Charedi. With very few exceptions – Gush Etzion and Michlala being two notable ones – these Yeshivos and seminaries actually indoctrinate their young charges to slowly but surely drop their Modern Orthodox values and adopt Charedi values.

As I understand Ms. Shaviv - Flipping Out does not seem to capture this fact. It instead focuses on Modern Orthodox young people becoming more serious about their Judaism and thereby more stringent in Mitzvah observance. But as Ms. Shaviv points out one cannot judge the year in Israel only by the level of improvement in Mitzvah observance alone. There are factors that are more difficult to measure - like psychological and attitudinal changes.

Why do so many of these students go to Israel for a year or two thinking they will come back to a Yeshiva university, and end up instead going to a Ner Israel?

Becoming more serious about Mitzvah observance or learning Torah need not make one change Yeshivos. Only a change in Hashkafos will do that. These young people are deliberately indoctrinated to believe that Yeshiva University or Stern are against Torah Hashakafos and that they will be harmed by going there and are encouraged to go elsewhere.

The truth is that even some of those students who do come back to YU or Stern do so with a jaundiced eye - a view implanted in their minds during their stay in Israel. Of course there are some who come back fully supportive of the YU Hashkafa, but how many? This is a very important question that seems to go unanswered.

This is the ‘flipping out’ that concerns me, not the adoption of higher standards of observance. That is a good thing. But it is when the Hashkafos change, when attitudes about the value of secular studies changed from a positive one to at best a utilitarian one if not a totally negative one – or when externals like manner of dress changes and wearing a hat becomes as important as keeping Sabbath observance – that is flipping out. Apparently what this book is missing. And there is more.

But you cannot properly discuss “flipping out” by looking at how many halachic stringencies students, on average, adopt. “Flipping out” is a minority sport that has as much to do with emotional and psychological factors as with halachic ones. Students who are affected may have trouble relating to their family; become obsessive and dogmatic about some aspects of religion, and shed central parts of their old personality. These are all harder to measure, but without addressing these issues substantially, the book cannot be said to be about “flipping out” at all.

It has become very apparent to me that these Israeli Roshei Yeshiva have an agenda of making Charedim out of young people with Modern Orthodox backgrounds. They are not satisfied with simply making them more religious, the goal is a comlpete Hashkafic change. And to a large extent I think they are succeeding. Is that fair? After all don’t’ they have a right to teach the Torah Hashkafa in which they believe

The answer is no. Not if they don’t spell it out to the tuition paying parents.

It is grossly unfair for any Israeli Yeshiva to not advertise who they are and what Hashkafos they teach. It should be made clear to every parent before they enroll their child. By not admitting their true agendas - they are deceiving parents.

Just to be clear, I have no problem with anyone changing their Hashkafos in either direction - as long as they do so in an intellectually honest environment that will expose them to the Hashkaific thought of both Charedi thinkers and Centrist thinkers.

It is when they are only exposed to one way of thinking which usually includes haranguing against those with Centrist Hashkafos to which I object. In my view that is nothing less than Geneivas Daas. And if I were a parent who sent a son or daughter to a Yeshiva or seminary like this and he or she changed Hashkafos, I would be demanding my money back.
Posted by Harry Maryles at 10:21 AM