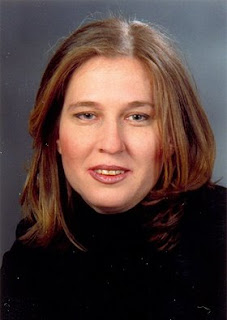 I just don’t get it. I know the reasons. But still…

I am referring to the obsession by many in the Charedi world with avoiding images of woman at all cost, no matter how modest their attire. Yes… I understand the need by some communities for high standards of Tznius - way beyond that which is required by Halacha. But this is extreme even for them which I believe is counter-productive. As in just about all issues I write about, there ought to be some common sense applied and some sort of rational middle ground sought.

This has been going on for some time now in publications like HaModia and The Yated. I have kind of ignored it as just plain silly. But what brings it to the surface now is the recent election of Tzipi Livni to head her ruling political party in Israel, Kadima. She is in a position to be the next Prime Mister of Israel. She will either soon form a coalition government or run in a general election - all within the next 90 days.

But Charedim will have no clue what she looks like. At least not if Hamodia and the Yated have anything to say about it. In fact Hamodia has reported that they will not even mention her first name.

I really think this is carrying Tznius too far, even for Hamodia.

As has been the case in just about every Chumra the Charedi world - they never saw a Chumra they didn’t like. As soon as ome segment adopts a Chumra others soon follow suit. My Charedi nephew who is basically of the American Agudah mentality has published a book about our family’s illustrious heritage which includes many photos. But whenever there was a woman in the photo - it was cropped out. I asked him why. He answered that since there are those who object to it, he left them out because he wanted to make the book accessible to everyone. On the surface it sounds fair except that it perpetuates as extreme Chumra and spreads it to all segments of Charedi Jewry including moderate Charedim. I wonder if Artscroll has this Chumra too. I don’t recall if there books publish any photos of women.

Another thing that bothers me along the same lines is the fact that it is becoming increasingly common to not have a woman accept an award at a dais when a couple is being honored. This happened last night at a dinner I attended. It was mixed seating. And it was a wonderful affair for a very worthy organization. But when it came time for the award (two couples were honored) the women were nowhere to be seen.

What has become common practice is that the husband will go up there to get the award, while the woman sits in her seat and is given some flowers or some such token. Personally I think this insulting. If I were a woman I would say thanks - but no thanks to the flowers.

The idea of Kavuda Bas Melech Pnima (the glory of a woman is internal) – even if taken to mean that a woman should not be in the public eye - has been taken way too far in our day. We are regressing to a time where women were in the home all the time as their living ideal. Women did not attend schools. They learned everything they needed to know from their mothers. They went right form their parents home into their husbands home at marriage. They rarely ventured outside the home. This was even true in general society.

Behavior such as I described above may have been appropriate in an era gone by. But we no longer live in such a world. Today woman are seen all the time in public, even those who live in Meah Sheraim.

It may be for reasons of modesty that such extremes are sought. I understand that. But - in the end they are still extremes that are not based in the reality of life in the 21st century - even in the extreme fringes of the Charedi world. What can possibly be gained by such extremes? What are they teaching their children about women?

In my view there is a subliminal message that is sent which goes way beyond Tznius. Vast numbers of Charedim end up with the attitude that woman indeed second class citizens. I am not entirely convinced that this is unintentional – despite strong protestations to the contrary which I hear all the time.

In my view – at least in most cases - whenever Halachos are taken to any extreme, the results are often negative and what ever is gained by such extremes will be more than lost by the (unintended?) consequences.
Posted by Harry Maryles at 10:58 AM