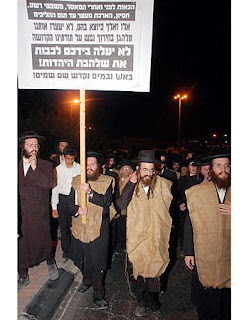 The people smirking in this archival photo on the right are to be despised! They are each about as lowly a piece of human debris as any Jew can ever be. It is from their ranks that some of the most disgusting behavior is found. This photo may seem like a photo of a peaceful protest. But it is a lot more than a protest. It is a warning - that anyone who violates the rules their community has set up will be dealt with violently.

And there is never a counter protest by others in that community. That’s because they support the values that these people are fighting for - a way of life peculiar only to them. This is what they seek. It is what drives the actions of those who are their enforcers.

The situation in Ramat Bet Shemesh has fallen to a new low. Last week, three girls taking a walk after the Friday night Shabbos meal were beaten by a gang of their thugs. I wrote about it at the time and now it has finally hit the media. Only the event was actually a lot worse than was originally described. I no longer have the patience for any apologetics that the Charedi world offers. I’m tired of the: 'Yes, but…'!

There is no ‘but’! There is no defense whatsoever for what they do. None! This type of vigilantism disqualifies their entire group from being called Torah Jews. They have no moral standing. Their standards are worthless! Their Judaism is worthless. Any group of people who tolerates the kind of behavior described in this Ynet article has lost any right to be called a Torah Jew! And as we can all plainly and painfully see - it isn’t just Ramat Bet Shemesh. This kind of thing takes place all over Israel wherever these people are found. It has happened in Bnei Brak, Meah Shearim and Beitar - as well as other places.

It doesn’t even matter how the girls attacked on that day in Ramat Bet Shemesh were dressed. They could have been wearing miniskirts and sleeveless. Their beating was an unqualified evil. Period.

The physical beating of three innocent young girls by these Charedi thugs in Israel is no different than if a gang of criminals on the West Side of Chicago had done it! They haven’t killed anyone yet – that we know of. But they will...

Now, most Charedim in Israel are peace loving Jews who would never dream of doing anything like this. But at the same time they all ‘understand’ what upsets these people. That’s the ‘Yes, but… attitude’. This gives that entire segment of Jews (and I use the term loosely) the idea that their goals are righteous and the community will be happy with the results if not the methods.

Another problem is that the Bet Shemesh police force is impotent. They seem to be unable to do anything about these people. So these gangs operate with impunity, terrorizing their neighbors into submission.

This group of Charedim has no respect for law enforcement. It sneers at them. They have no fear of it either.

I believe that this entire group of people and their leaders - with all but a few brave exceptions - support those vigilantes. They can deny it all they want. They can even condemn it. They can even call them names like ‘Mushchsaim’ as was reported about one of their leaders recently. It doesn’t really mean anything. That’s because they are quite pleased with the results. They succeed in their goals through terrorism - a minor detail that will soon be forgotten in their brave new utopia of grateful residents!

I have no fool proof way of solving this problem. I have made suggestions in the past along the lines of their community leaders backing up law enforcement and the judicial system. But these suggestions are no longer realistic in my mind. Their community leaders will never side with Israeli law and will always protect ‘their own’. Any verbal criticism forthcoming is pure window dressing and worthless. These criminals are immune to it. And their leaders know it!

The unfortunate reality is that for lack of another alternative the citizens of Ramat Bet Shemesh are going to police the area themselves. Individual citizens who have tried to counter them in the past have had their heads bashed in! So a civilian patrol of Shomrim – guards - has been established. And violence will beget violence.

I am normally opposed to this kind of retaliatory measure. And I don’t support it here. But what are the good people of Ramat Bet Shemesh supposed to do? Now these cowardly criminals will get a taste of their own medicine. But my fear is that this kind of violence can easily spiral out of control and permanent damage or even death could result to innocent people.

If I were the new Charedi Mayor of Bet Shemesh, I would make this situation my number one priority. He has a unique opportunity to change the reality there. I would concentrate on making law enforcement more effective.

Here is an idea. Perhaps an undercover young male and female dressed like Datim – armed and trained in the martial arts - should take a Friday night walk in that neighborhood and behave a bit frivolously. They will then draw out those criminals. Let a watching and waiting police force witness it - and then go in there and arrest them all charging them with violent assault and battery. There will now be willing witnesses and these men (and I use that term loosely) will finally rot in jail - all of them. Let their wives and children be without husbands and fathers for a few years. And let their leaders squawk about police brutality then. It should fall on all of our deaf ears.
Posted by Harry Maryles at 10:49 AM