What Does ‘Daas Torah’ Say? 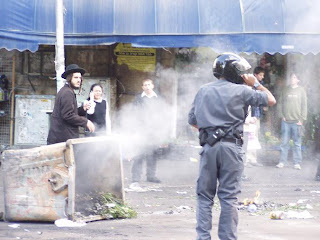 Did hospital officials act properly in reporting the abuse they suspect took place by a mother to her infant son? Were they in fact obligated to do so? Or should the hospital be boycotted? Are the protesting rioters right? Or should they be condemned?

What about the way the suspected abuser was she treated? Did the police overreach and treat her more harshly than necessary? And what about the protesters? If one agrees that the protesters are ‘insane’ (in the colloquial usage of that word) should rabbinic leaders come out with public condemnations? Why or why not? If yes - how public should they be? And what should they do about it?

Most people who read this blog know what my answers would be. But what about someone who many see as a Gadol? And from whom many seek what they call Daas Torah?

These and other questions were answered by one such individual – one of the leaders of the Edah HaCharedis, Rav Moshe Sternbuch. Courtesy of Rabbi Daniel Eidensohn’s Daas Torah blog and without any further comment from me - here are Rav Sternbuch’s thoughts:

He agrees that the rioting is wrong and he condemned the demonstrators are "mushugoyim". He said that it was in fact the duty of the hospital to report their findings to the authorities and thus they acted appropriately. He criticized the talk about boycotting the hospital in retaliation - as making no sense and and in fact being "very self-damaging." He asserted that the real point of contention is not whether this woman is guilty or innocent - but rather the way the police have dealt with her - chaining her hands and feet. If in fact it is true - as the police have claimed - that this woman is mentally ill, she should not have been placed in a cell together with dirty and dangerous criminals.

The reason that he hasn't issued a statement for the street or put up wall posters is simply that he knows he has very little influence on the people that are rioting - since they don't accept his authority. There are other people who in fact wield more influence - but they have yet to be convinced that the police have justification for what they have done. He is doing what he can behind the scenes to end the confrontation.

Posted by Harry Maryles at 8:16 AM