What If He Were Your Son? 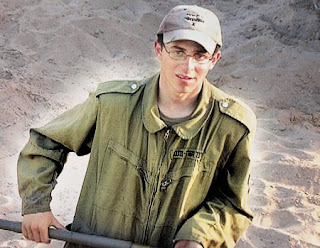 It is the eve of Shimini Atzeres and Simchas Torah. For the vast majority of Orthodox Jews this day (or 2 days for most Orthodox Jews who do not live in Israel) this is one of the most joyous times of the year. Dancing is the order of the day on Simchas Torah as we celebrate the completion of the yearly Torah reading cycle.

But there is one Jew who I cannot get off of my mind on this day who will not be able to celebrate anything with his brethren. His name is Gilad Shalit.

There is a lot of news floating around the various media about his imminent release by Hamas terrorists in exchange for the release by Israel of masses of Hamas criminals being held in Israeli prisons. This has resulted in a vigorous debate between those who are for and against it.

There are those who though very concerned for Shalit’s welfare say that giving up terrorists for Shalit will just encourage more kidnappings. And what’s worse - those terrorists who are released will possibly wreak havoc upon us in the future – possibly killing many more Jews in various ways including suicide missions. So they are opposed. This includes various Roshei Yeshivos. From YWN:

Many roshei yeshiva affiliated with the pre-army Mechinot yeshivot in Israel have signed a letter that was sent to Defense Minister Ehud Barak, expressing their opposition to the release of terrorists to bring Gilad Shalit home.

I suppose this is the prudent course of action to take. But I am not one for prudence here. I want Shalit out! His life is in danger. We know what these people are capable of. Think Daniel Pearl.

I realize the dangers of mrelaesing so many terrorists in such a situation. But they are only potential dangers. Refusal to deal for Shalit means certain death for him. This is a Bari V’Shema – a certainty versus uncertainty. The Gemarah tells us that Bari Adif Certainly has the upper hand in the deciding what to do. To me this is a case of Pikuach Nefesh -certain death for one man versus possible future deaths.

I therefore disagree with those Roshei Yeshiva. In my view – if Israel cannot rescue Shalit in a clandestine operation than they ought to negotiate the best deal they can and let this young IDF soldier go home to his parents. He has been held captive long enough!

It would be my preference to then carpet bomb Gaza after those terrorists are returned there (with the appropriate leaflet warnings to civilians). I think Israel ought to flatten it.

But since that is not going to happen Israel will just have to be more vigilant in protecting its citizens after such a deal is made.

I know this solution is not perfect. Nor is it very popular. But I made it with the following thought in mind. What if it were my son? I answered that one pretty quickly. I cannot be a hypocrite and say that I would allow my son to be brutally murdered by terrorists if there was any way we could get him out alive. Gilad Shalit should not be treated any differently.

I believe that in the end Israel will make the same decision. And as difficult as it is to make – in my view it is the right one.
Posted by Harry Maryles at 9:38 AM