Of Bombs and Underpants 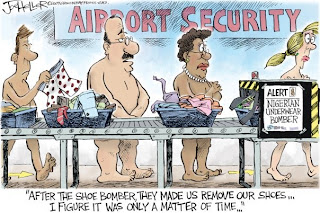 You know… I am really getting tired of political correctness.

Don’t get me wrong. I am not advocating lowering the bar with respect to treating people with dignity. And I include everyone from any background, religion, race, creed, or color. I abhor racism and reject it in all its incarnations. But what is happening in the US goes far beyond even the minimum standard for common sense.

The recent failed attempt by a would be suicide bomber sent by Al-Qaeda is a case in point. Umar Farouk Abdulmutallab who is Muslim become so radicalized that he volunteered for a suicide mission. He was in fact on a watch list in the US. A watch list is made up of people who have been reported as suspicious to The Department of Homeland Security. He was reported as a danger to the US by his own father, a devout Muslim himself. But he saw his son being radicalized. What did the US do about that? Nothing. Since there were apparently no significant corroborating reports - they did not feel the need to go any further and put him on a no-fly list.

But they should have. His Muslim religious beliefs and name along with that warning from his own father should have raised the reddest of flags. But our political correctness prevents us from doing that. It is not PC to be more suspect of a Muslim.

Muslims say it prejudicial. They call it ‘Flying while Muslim’. Well it’s too bad. It is primarily Muslims that are the suicide bombers. Of course they should be profiled and treated differently than the rest of the world. But in the topsy turvy world of political correctness we have to treat an elderly beshaitled Jewish grandmother - who very possibly is a holocaust survivor traveling to Israel - the same way as a young Muslim flying alone and buys a one way ticket with cash. That's what Mr. Abdulmutallab did. And then he flew to Detroit with an explosive device in his underpants.

That is the reason we have problems like this. Instead of focusing on the Muslim and giving the little old Jewish lady a relatively quick pass, everyone gets the same shabby treatment. There is simply not enough time to do a proper investigation of everyone. It simply is not enough to prevent what happened last Friday.

What is the solution for our brave new PC world? A type of x-ray machine that can see right though your clothes. That’s right. These machines do a full body scan and provided the security staff with a picture of you virtually naked!

Now we aren’t there yet. Although some airports have this technology, it is not yet mandated by law. Congress correctly felt that this was an uncalled for invasion of privacy. But this technology would have prevented the suicide bomber from boarding the airport. That bomb was in his underpants. It would have been seen – right along with all of his body parts.

Since this fellow was able to get on board an aircraft without that explosive being detected – this option is now seriously being considered. It would be monumentally expensive and a major violation of privacy. But what price is security worth? To quote a popular commercial it’s ‘priceless’! So, ladies prepare to bare more than your souls as you pass through the security gates when you next fly!

Protecting human life is worth paying a price for. But is this degrading and voyeuristic new virtual full body search really necessary? Let us look at a country whose national airline should in theory be the primary target for any suicide bomber: Israel. El Al has not had an incident in over 30 years! They do not have any of these ridiculous invasive security measures. Their process is very thorough and totally un-invasive. How can it be so successful and at the same time so relatively simple an unobtrusive?

That is what makes them so effective and superior to other countries, including the United States.

Isn’t it about time that we do the same? Let the Muslim community squawk all they want about unfair treatment – or being singled out. Singling them out is exactly what is needed. No Arab or Muslim will suffer if he or she is innocent. They will just have to go through a few additional and more thorough security checks. And they should realize why. It's not personal nor is it perjorative. This is not to say that Muslims are inferior - or second class citizens. It is to recognize the reality is that terrorits are almost always Musilm. An honest Muslim should concede that. It's just plain common sense.

The necessity of profiling is now more apparent than ever and well overdue. It should be implemented world-wide. As long as some Arabs and Muslims keep trying to blow themselves up for the sake of Allah, profiling them is the only rational thing to do.
Posted by Harry Maryles at 8:06 AM