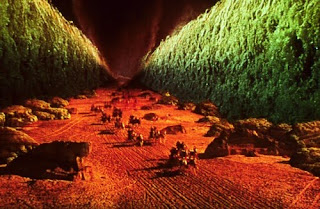 The seventh day of Pesach witnesses one of the greatest miracles of all time.

The Red Sea was split. We (our ancestors) crossed it. The ancient Egyptian armies chased after us and drowned.

The question may be asked, why did the Egyptians chase us down in the first place? After all, didn’t Pharaoh finally and fully agree to free the children of Israel from slavery after experiencing the deadly tenth plague? Why chase us down immediately after that?

The answer is implied in the ‘Dayanu’ portion of the Hagadah. Therein it says that had God ‘given’ us the ‘money’ of the Egyptians and not split the Red Sea - Dayenu - it would have been enough.

What – one may ask – does having their money have to do with splitting Red Sea?

The answer to that is given by the Ran. He says that the reason we – the Bnei Yisroel - were told to ‘borrow’ goods from Egypt rather than to just take it from them is so that the Egyptians would expect to be paid back.

Had we simply taken it – the Egyptians might have reasoned that after so many years of slavery we are in fact entitled to it as some form of minimal compensation. By ‘borrowing’ it, it was implied we would pay it back to the Egyptians back before we left.

But we of course left without paying it back. Thinking their ‘money’ was now stolen they were entitled to take it back. So they got on their chariots and chased us down to the Red Sea.

This was all part of God’s plan. One of the ways God metes Divine justice is to do it in a manner akin to the transgression. This is called Midah K’Neged Midah.

Pharaoh decreed that all male children were to be killed by drowning when he was told that a deliverer would be born among us that would ultimately deliver us from bondage. God therefore led them to the Red Sea ‘now’ to be drowned – Midah K’Neged Midah - as their punishment.

Adapted from Torah L’Daas
Posted by Harry Maryles at 12:18 PM