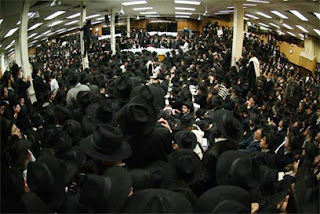 How many are there? How many Charedi Jews are there that are Marranos? This is what they call themselves. Marrano is the commonly used term used to describe Jews of 15th century Spain who hid their religious practices from the government. Spain decreed that all non Catholic residents of that country either convert or leave. Jews who chose to stay pretended to convert and publicly acted like Christians. But secretly they were observant. Those who were caught were tortured.

It’s ironic that this term is being used in exactly the opposite way by those who are outwardly Charedi and secretly secular. And there is a torture involved here too. The torture of leading a double life.

Most of the stories about Charedim who go OTD (Off the Derech) involve a break from family and tradition. They leave their community to adopt a secular lifestyle. But an article in Ynet describes a group of Charedim who do not leave. They maintain an outwardly Charedi lifestyle but are non believers. Hence the name Morrano. They hide who they really are.

How many are there? The Ynet article seems to indicate that the number of ‘Marrranos’ is pretty big. That makes it a big problem.

Why have these people gone OTD? It is hard to speculate about the reasons why people stop believing. But those who have gone through it seem to share a common theme. From Ynet:

"At adolescence I already had questions, but after I got married and had the children, they only grew stronger," Matan told me, months before he took his own life. "The religious claim that the have decisive proof that the path of religion is the truth, so I set off to examine this proof. I started looking for answers in books in the Beit Ariela Library and at the Hebrew University, and then I also turned to various researchers. At one point I started searching the Internet, and it didn't take long till I realized it was all nonsense."

Like I said - there are many reasons that people go OTD. Professionals seem to say that emotional reasons are by far the biggest motivator. Abusive parents or other family dysfunction is probably a major cause. Sexually abused children tend to go OTD in great number as well.

But every once in a while it is for intellectual reasons. When questions are asked and remain unanswered (at least to the satisfaction of the questioner) that can easily pull one away from belief and observance. That seems to be the case with those interviewed in this article.

Those who lead this double life do so for social reasons. Living a double life becomes extremely difficult and ultimately very depressing for them. Hiding their secular lifestyles and lack of belief must be impossibly hard. Especially if they come from the kind of insularity that is so typical of some of the more extreme elements of the Charedi world. One of those written about in this article committed suicide – ‘Matan’ (a pseudonym) in the above excerpt.

So again I ask: How many Charedi Jews are there that act Frum and believe in nothing? How many of them are married with children - as are those described in the article? And what is the best way to deal with these people if we find out? What can be done to prevent this from happening? Just because someone goes OTD does not mean that it is a Mitzvah to let them suffer in silence. The bigger Mitzvah is to allow them to be honest about their feelings and not feel forced to hide them. Hiding feelings can easily lead to tragedy. Ask Matan’s family.

Professionals who are involved with young people who are OTD insist that their families not shut them out… that they keep the lines of communication open. The problem with that is the Hashkafa that teaches one to reject the non believer. To shun him! To break all relationship with him. Many parents even sit Shiva when a child goes OTD.

I understand where this comes from. We are taught from the earliest age to reject the heretic and stay far away from him. But how can anyone do the kinds of things that may cause such a person to become so depressed that he commits suicide? How does that help anyone?

If the heretic is your child how can you sit Shiva? Isn’t it better to have a relationship that is accepting of the individual rebelling while disapproving the rebellion itself? Of course it is. And even the disapproval should be done in non confrontational ways.

The Marranos in this article are married adults with children. They have been going through the motions for years even to the point of getting married and having children. This didn’t start suddenly - as the excerpt above indicates. It was a process.

I think the entire religious world including Charedim needs to get a better handle on this. They need to know more about what some of their young people are thinking. They need to create a non judgmental environment that encourages their children to be more open about their feelings including those that deal with belief in God and in Judaism.

There needs to be better training on the part of communal leadership – starting with Rabbanim (Rebbes - if they are Chasidim), Mechanchim, and parents to know how to answer difficult questions of belief and to certainly not shun those who ask them.

It may not lead to bringing them back in every case. But it will at least prevent the kind of frustration that forces them to live a double life that can ultimately lead to clinical depression and even suicide. There is no coming back from that.
Posted by Harry Maryles at 10:18 AM