The Mind of a Gadol 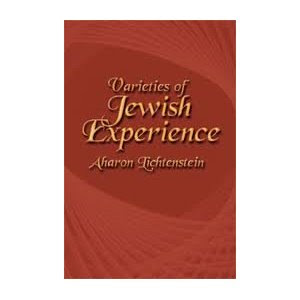 There is no doubt in my mind about it. If there is any heir to the throne of Gadlus occupied by Rav Joseph B. Soloveitchik it is Rav Aharon Lichtenstein. If one wants to know what - and who - is a Gadol in the 21st century one need go no further than Rav Lichtenstein. I have felt this way for quite some time now. Even though I never met him - the more I hear about him, the more I read his words, the more I am convinced of that.

This feeling came through once again after reading essays from his new book, Varieties of Jewish Experience, published by KTAV.

Not only does his brilliance shine through, not only is his erudition so evident, but his clarity of vision and purpose is manifest in virtually every word he writes. His exposition is reminiscent of the great works of his Rebbe and father in law, the Rav. His level of intellectual honesty is matched only by his quest for Emes. And in seeking it, he plumbs the depths of both Torah and Mada – just as did the Rav.

He leaves no page unturned in his quest. Nor does he concern himself with image or reputation. He is only interested in truth – the truth of Torah. And when he believes he is right he has the courage of his conviction to speak his mind on any subject or issue facing the Jewish people. His erudition is unmatched by anyone in any rabbinic leadership position in our day. Brilliance, Torah, Chesed, and Emes defines this man. As does his humility.

His new book is a compilation of essays published in various forums reflecting – as the title suggests - a variety of Jewish experience.

To say that he has the courage of his convictions is an understatement. How many others who might be considered Gedolim would publish an essay about the act of sex? That is in fact the first essay in the book. It spells out what the prevailing attitude about sex in marriage is and contrasts it with what the Torah, Talmud, Rishonim, and Achronim say.

In fact asks Rav Lichtenstein, why grant any authority to laypeople at all? And why grant any to rabbis over questions of communal governance and policy – that proceed from conflicting assumptions and move along diametrically opposite lines?

The point of departure of the first is the presupposition that in a Jewish community, laypeople should have no authority at all and consequently if granted a rationale must be found for it in order to justify it.

Contrarily the latter presumes that in matters of communal governance and policy there ought not be any rabbinic interference at all!

Rav Lichtenstein is uncomfortable with either presupposition. The first seems blatently patronizing and paternalistic. It assumes that Daas Torah is the only way to proceed with respect to both ends and means. No other entity has a say.

Rav Lichtenstein finds this position untenable. Even if we assume that spiritual oligarchs know best, it does not necessarily follow that imposition of their will is advisable. In the public arena, poorer but self determined results may preferable to an ecclesiastically informed and dictated bottom line. There is a moral and religious value in according dignity and responsibility to the laity. Provision of course mst be made to insure Halachic and Hashkafic acceptabilty. This is indeed the province of the rabbis. This is true as well in difficult and sensitive matters not governed specifically by Halacha but is yet may not be fully consonant with its spirit and tone.

Nor is Rav Lichtenstein satisfied with the presupposition of the lay leadership. While matters of public policy where Halacha is not an issue – a Davar HaReshus – He finds the idea of leaving out any rabbinic participation therein unconscionable. It does violence to Halacha and its rabbinic representatives. The notion that whatever has not been explicitly proscribed and therefore none of the rabbis business is an abhorrent one! To put it the way Rav Lichtenstein does:

It obviates sensitivity to lifnim mi-shurat hadin,, in its multifaceted manifestations, obliterates meta-Halakhik considerations, and potentially eviscerates the ethical and axiological components of Torah spiritual life. It invites not only Pauline and Buberian charges of arid legalism but Hazal’s scathing comment, lo harevah Yerushalayim ella al she-danu bah din Torah. It diminishes the image and the reality of the rabbi’s stature, and emasculates his position as the spiritual and pastoral leader of his community.

What is the ideal model for lay leadership? How much of a role should rabbinic wisdom play? What about rabbinic pronouncement and bans? That is all beyond the scope of this essay. You will have to read the book. Needless to say, it is a complicated issue with many sources in Chazal and the Rishonim.

Other topics covered in this book are many of those dealt with right here. I highly recommend it if one wants to see the mind of a Gadol at work.

The loss to Yeshiva University of Rav Lichtenstein’s via his Aliyah to Israel is immeasurable. He should have taken the reigns of leadership there upon his father in law’s passing. It is a leadership that is sorely lacking in this country – a vacuum was created and the void has not been filled.

Rav Soloveitchik had many great Talmidim, who are today Gedolim in their own right. But in my view only one of them comes close to the Rav’s greatness in so many ways. He now lives in Israel and is the Rosh HaYeshiva of Gush Etzion. Their gain is our loss. Had he stayed in Yeshiva University I personally believe he would have continued the legacy of his father in law like no other.
Posted by Harry Maryles at 9:59 AM