An Unpopular but Realistic View of Chevron 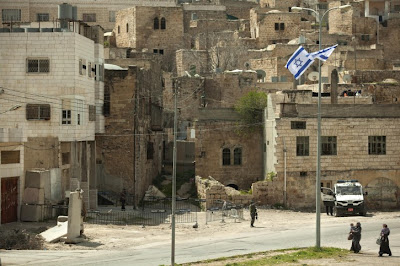 One of the holiest sites in the holy land is Ma’aras HaMachpela - the Cave of the Patriarchs located near Chevron. This is where Judaism’s founding forefathers are buried. This treasured burial place is underneath a mosque built by Muslims who honor our patriarchs as well and consider it a holy place too.

Ma’aras HaMachpela was recaptured by the Israeli Defense Forces – along with two other holy sites during the 1967 six day war. It was a proud and happy time for Jews all over the world to know these 3 sites were now back where they belonged- in the hands of the Jewish people. Who can ever forget General Mota Gur’s words as he entered the old city of Jerusalem and said ‘Har HaBayit B’Yadenu’. The Temple Mount (where the Beis Hamikdash was located) was now in Jewish hands for the first time in 2000 years! …as was Ma’aras HaMachpela and Kever Rachel –Rachel’s Tomb.

Those were heady days. We all thought that this would establish Israel’s dominance over the Middle East and that the State of Israel would now include all re-captured land - soon to be annexed.

But it is now 2012. By now reality has more than set in. Those 3 locations are no more in our hands than Ramallah is. Yes, we have jurisdiction over them. But they are controlled by Arabs and far from settled issues as far as the world is concerned.

The Arabs have seen to that over the last 45 years. They have far from abandoned their goal of annihilating Israel. And to the extent that they can, they have used all means at their disposal to achieve that goal.

Areas that are heavily populated by Arabs have been virtually seized by them. And they are angry! They consider the Israel’s Independence Day to be their ‘Holocaust’ Remembrance Day. That is how they see the establishment of Israel… a tragedy of epic proportion.

Israel has tried to appeal to Arab common sense since the very first day of its existence. Israel wanted an inclusive society where Arabs and Jews would be given equal rights and be treated with mutual respect – all living in the same country. Arabs living within Israel’s borders were given voting rights and have representation in the Knesset. And yet they still hate us and want us out. Over 64 years of attempting to be nice to the indigenous Arab population, has done little to change their minds. Generations of West Bank Arabs raised in refugee camps since the 6 day war and indoctrinated to hate us have seen to that. They call us oppressive occupiers and the world says Amen!

It is also true that by now, Israel has decided to concede to reality and live in 2 States side by side – one Jewish and one Palestinian. It has not happened yet because there are still militant Arabs that want us out and will not accept a two state solution. Of course the details are far more complicated than that – but this is basically where we are at. They hate us. They want us out or dead.

That the vast majority of them won’t act on it doesn’t mean they don’t wish it. And in cases where they are able, their Jihadists will stop at nothing to achieve it. Including suicide missions. And there are hotbeds of hatred and violence where things like that are more likely to happen.

Which brings me back to Ma’aras Hamachpela. As I said it is located near Chevron, an area with a history of murderous violence against Jews. Chevron is almost entirely populated by Arabs. And yet there are Jews who insist on living there in spite of it.

Ordinarily one might consider them heroes for risking their lives in order to have a Jewish foothold in such a holy place. These are the religious Zionist zealots who sacrifice their lives for what one might see as a noble purpose. I don’t see them that way. I consider them to be a danger not only to themselves but to the entire Jewish people. And now they have gone one step further towards a possible incitement. Dozens of settlers have occupied a building (the one on the left in the picture)there without permission of the government. It doesn’t really take much for the Arabs of Chevron to go on a murderous riot – as they did in 1929. There was a massacre of 29 students at the Chevron Yeshiva back then by our beloved cousins.

Now it is true that these zealots are protected by the army. And they carry weapons every day of the week – including Shabbos. But that does not lessen the danger for the rest of Klal Yisroel. Murderous Jihadists have been known to attack Jewish targets outside of an immediate trouble spot before.

Why do things to incite them? What is the point? As holy as Ma’aras haMachpela is, it is not worth endangering lives over it. It is not worth having 850 Jews living among a population of 180,000 Jew hating Arabs with a history of violence against the Jewish people. There is no mandate to do this now. Moshaich is not here yet. We shouldn’t be poking sticks at a hornet’s nest. And that is exactly what those settlers in Chevron are doing.

Even if they feel they have a religious obligation to fight for that territory, at whose expense are they fighting for it? Why do their values supersede the values of those who disagree with them? As much as I would like to see a Jewish Chevron. Or even a Jewish presence that is accepted by the Arabs who live there. But it is not going to happen now. Those settlers are a brave but selfish group of people who see only their own values and act accordingly without considering the consequences for others. They may think they are only risking their own lives, but they risk all of our lives.

If these settlers end up keeping that building it will gain nothing for us. It will only make everyone else mad. How much bad PR can Israel take? I don’t see anything good coming out of this. What’s next? Taking over the Temple Mount? If Ma’aras HaMachpela is worth taking over because of its holiness, the Temple Mount an even bigger priority! Isn’t it? Why stop at Chevron?

This is not the time to be doing these things. If I were the Prime Miniester of Israel I would do all in my power to evict them. I would not delay it. They may have good intentions. But I am not interested in the road to hell they may lead us into.
Posted by Harry Maryles at 12:48 PM