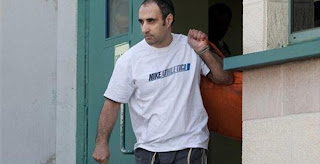 Hagai Amir wears hits Tzitzis out.  I guess that makes him religious. Except  for the fact that he helped his brother Yigal plan and execute the assassination of former Israeli Prime Minister Itzhak Rabin. Now 16 and ½ years later he has been released from prison and says he is still proud of his participation in that act.

What a skewed sense of values when one thinks murder is a Mitzvah same as wearing your Tzitzis out. His justification is that he thought Rabin a traitor for signing the Oslo Peace Accords. One can disagree with what Rabin did. One can say that it would likely have brought tragedy to the Jewish people had a peace treaty been signed with the Palestinians. That Arafat had an ulterior motive in signing a peace treaty thinking of it as a first step to dismantling the State of Israel.  Or that giving the Palestinians a state on the West Bank (Yehuda and Shomron) would give them a base for increased terrorism.

Although I’m not convinced that this was a 100% certainty - looking at the fact that giving up Gaza has caused exactly that situation, it is actually hard to argue the point. Does any of that justify murder? In the mind of the Amir brothers  - it did. And they are both unrepentant.

One might think that this type of thinking is the province of the demented. Only of those who cannot think straight. Unfortunatly that is not the case.  Yigal Amir and by association his brother Hagai are heroes to many people. They consider Rabin’s murder a courageous and patriotic act of high order. That they spared the country of catastrophe! They were willing to risk their freedom and even their own lives for it. And were happy to carry out their sentence in prison.

These are the same people who pay homage to Baruch Goldtein the mass murderer who slaughtered a group of Muslims in Ma’aras HaMachpela as they unsuspectingly stood there in prayer. Until the State of Israel made it illegal, pilgrimages were made to his gravesite (somewhere in or around Chevron) to pay him honor. Busloads of people were taken there on a regular basis.  A monument to him was even erected by his supporters (since removed by the government if I recall correctly).

I am surprised that that these extremists haven’t called for an annual national day of mourning for their slain ‘hero’.

When I speak of religious Zionist extremists the Amir Brothers are the poster children for it.

But the Amir brothers are admired by more than a few extremists in Israel. I fear that there are many people in mainstream Judaism that admire them as well. At least from afar. If one looks at the responses at to this story on VIN’s website, one will see comments like these:

Rabin was pretty much despised before his murder; his popularity sunk to an all time low. After his murder, the population changed their minds about Rabin and as we read the parsha last week, Achari Mais: Kodoshim.

Rabin deserved to go. Were all lucky he went before he took all of us down with him with his political plans that would cost many Jewish lives.

He got more time than Arab terrorists who blow up innocent civilians & enjoy it. Something wrong there, although I do not condone what he did.

3 out of 7 comments (as of this posting) were sympathetic to these two brothers.

What is even more troubling is the kind of comment that condemns it while at the same time understanding it, like the last comment excerpted part of which read “although I do not condone what he did”. This is the kind of qualified condemnation one often hears from some mainstream Charedi leaders who condemn extremists in their own camp but sympathize with their motives.

There is something terribly wrong about any Hashkafa that condones - or even understands without condining - violent behavior for “the cause”.  Extremism in the defense of a Hashkafa is a road paved to Hell!  And those who provide even the slightest justification for it are traveling down the same road.

Posted by Harry Maryles at 9:32 AM