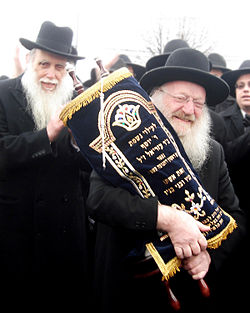 At the risk of overstating the obvious (and doing it several times) I feel compelled to point out an article in Hamodia that demonstrates quite clearly a major difference between Charedim and other Orthodox Jews. The subject is the internet.  And it is Rav Matisyahu Salomon who seems to be leading the charge.

In my view the massive popularity of the Lakewood Mashgiach has caused his voice to be listened to as one of the wisest in the Charedi world. Even though he is not a member of the Agudah Moetzes it seems his views are considered as much Daas Torah as those of any of their members. Perhaps even more so. If there is any guidance to be had on any issue, Rav Salomon’s guidance seems to be the most sought after by huge masses of Charedi Jewry.

One will recall my recent post about the troubling aspects of something called the Internet Asifa. Although I support the idea of having solid internet guidelines for use in a religious home– or any home really, especially where there are children present - I reject and protest the fact that the internet is being painted as a purely evil medium by rabbinic leaders such as Rav Salomon.

The truth is that many Charedi leaders understand the positive value of the internet. I don’t need prove this to anyone who has ever used it.  But this fact is completely ignored and rejected by Rav Salomon and other rabbinic leaders in the Charedi world.

Chasidic Rebbes perhaps feel the most strongly about it. The Satmar Rebbe has completely banned it – sanctioning it only for business. And even then, only with filters. Satmar schools do not accept children if the parents have the internet in their home.  (I wonder how many Satmar Chasidim use the internet in secret? I’ll bet there are more than a few. But I digress.)

The same thing is true in the non Chasidic Yeshiva world. Lakewood’s schools have a similar ban with similar consequences. And yet plenty of people in Lakewood have the internet - one way or another. With hand held devices like I-phones which are basically small computers  - there is no telling how many people in Lakewood violate the ban in secret this way.

Rav Salomon realizes this and has conceded to reality. Which is why he has called for this Asifa.

When someone commands the awe and respect that Rav Salomon does… and is seen as a man of great wisdom on all things Jewish (in the Halachic and Hashkafic sense) his perspective on the internet will be taken as gospel. What is the gospel according to Rav Salomon? The Hamodia article contains a transcript of the discussion about the internet Asifa between Rabbi Efraim Glassman, a vice principal at Mesivta Torah Vodaas and Rav Salomon. Here are some excerpts.

In answer to a question about whether the Asifa was pushed by agendized Askanim, Rav Salomon said the following : All that I can say about that is that it is not true. On my own initiative, I went to Eretz Yisrael to get eitzos from the Gedolei Eretz Yisrael whether this can be a method, and they all agreed with me at the time that this is the right thing to do.

That’s the only emes’e safeguard. In situations where people will tell us that they are forced to have the internet for the sake of parnassah, or whatever reason they may have, we would suggest to them that unfiltered internet is “treif gamur” and has no heter whatsoever. For whatever purpose you have to use internet, it is only to use it, but to use it safely is a priority. It is our priority. And that is what we would like the olam to accept.

This should end any speculation about whether Rav Salomon was somehow manipulated into doing this. By his own word - he initiated it.

And where did he go for guidance? To Israeli rabbinic leaders.

As I have been saying for some time now, one should not discount the impact Israeli rabbinic leadership has on American Charedim.  And yet the two cultures cannot be any more different. What is considered a Kiddush HaShem in this country would be a considered a Chilul HaShem by Israel’s Charedim.

Case in point is the Beren Academy a religious school in Texas whose basketball  team qualified for a playoff spot. But they refused to play on Friday night, when their playoff game was scheduled even at the price of an automatic forfeit. (They eventually played that game after a lawsuit was filed and massive pressure was brought to bear on officials to accommodate the religious beliefs of those boys. The time of the game was rescheduled so it would not be played on Shabbos.) That was a Kiddush HaShem.

In Israel, the very idea of participating in a sport is forbidden – let alone having a school team participate in an organized way via a league. This is the culture Rav Salomon sought advice from for American Charedim.

I don’t know if Rav Salomon even realizes the positive value the internet has. Or perhaps he does - but refuses to publicly acknowledge it for fearing that even the slightest approval may undermine his message. Either way it is a truth denied. In my view there is nothing wrong with acknowledging its positive value while trying to deal with its negatives. In fact I would go so far as to say that omitting this truth undermines his message.

Another thing that was troubling to me - as mentioned in an earlier post - has been verified by Rav Salomon’s own words. It is the view that only the Charedi world counts as Klal Yisroel:

(T)he main purpose… why we created an “Ichud HaKehillos” as a basis on which to make this kinus. Because it has to be a kinus of a united Klal Yisrael. The pain has to be felt as the pain of Klal Yisrael and the search for a - I don’t really like the word “solution” - the search for help has to beKlal Yisrael’s search. We have to find some way or another to hold up this terrible tragedy.

Ichud Kehillos – the United Communities. There you have it all. The only way this “terrible tragedy” can be dealt with effectively is if all of Klal Yisroel is united in its goal here.  And who is Klal Yisroel? Not Modern Orthodox Jews. To the best of my knowledge no rabbinic leader from Yeshiva University was invited or even consulted.  And not Chabad either for the same reasons. Only the Yeshiva world and the Chasidic world. The rest of us? I suppose he might say come join us as individuals but don’t bring any of that MO or Chabad baggage with you.
Posted by Harry Maryles at 11:53 AM