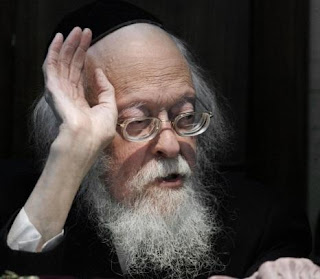 One of the explanations used by certain religious publishers for omitting information in biographies of great rabbinic figures is that they are meant to inspire people and not meant to reflect an accurate historical record of their lives.

That means that any perceived negative trait, event, or behavior about the subject of such a biography is completely omitted. And worse sometimes the positive imagery is exaggerated to the point of being so ridiculous that they actually make that subject look bad.

For starters critics of this type of censorship (like me) have noted that censorship of this type is highly subjective. How – for instance - does one define positive versus negative imagery?

Case in point, in a biography on Rav Aharon Kotler, the fact that he had read a classic piece of secular literature was omitted because the author felt that this was unflattering information about a Gadol who is supposed to be immersed only in Torah endeavors and who supposedly eschewed literature like that. On the other hand for those of us who value classic secular literature - that information would have inspired us.

I would go a step further. The value of the truths of history should encourage all information about such an individual be revealed. Even if some of it were negative by objective standrads. That they were both great men and human by dint of some personal flaw or behavior at some point in their lives is what makes them inspiring.

It shows that the flawed nature of a human being is not an impediment to becoming a great person.  If flaws and behavior are always eliminated these great rabbinic figures will be seen as superhuman – and ultimately uninspiring!  Who after all can ever hope to be on a level of Malachei HaShareis – angels in heaven in direct service to God? Certainly no mere mortal!

Eliminating the truths of history is therefore a non starter for someone like me.  As was the case for R’ Nosson Kaminetsky who paid a very high price for revealing biographical truths in his book, Making of a Gadol.  At the behest of certain community activists who complained about it, Rav Elyashiv banned the book.

But everything is not rosy in the world of flattering biographies. What if such portrayals are so exaggerated that they have the exact opposite effect?

Marty Bluke has given me permission to post the following statement he made on a private online e-mail list:

Here are 2 stories from the article:

1. "When R' Chaim Kanievsky was a young Avrech, his wife, Batsheva Kanievsky [R' Elyashiv's oldest daughter], complained to him that he didn't learn the same way that she saw in her [father's] house. There is no need to say that the Grach even then was one of the biggest masmidim of his generation and learned day and night. Even so, the Rabbanit said "You recognize the children and can identify each child by name. By us, when we were little children it was patently clear to everyone in the house that father [R' Elyashiv] due to his tremendous diligence in learning didn't recognize us and didn't know our names"

2. "R Yosef Shalom was not involved at all in the running of the house. He didn't receive a salary from anywhere he didn't preside over the Shabbos table and he had no idea where the money came from.

The lack [of material goods, money] was so terrible that it literally became life threatening, one of the daughters was hospitalized because of malnutrition and almost died."

Mishpacha is obviously a very Charedi magazine. They most certainly adhere to the formula of pure flattery in their biographical descriptions of great rabbinic figures.  They obviously must feel that the behavior described about Rav Elyashiv is something to emulate… something we should all aspire to. The role model for Hasmada now becomes someone who ignored his family to such an extent that it almost caused the death of one of his children! Not to mention that he had so little to do with raising them that he did not know their names or even recognize them!

Now - I do not believe these stories. I am convinced that these are exaggerations to highlight his devotion to Torah study. What is important to note  about this is that Mishpacha felt this was something positive  and thereby something to emulate!

This is what happens when truth is sacrificed for some sort of perceived ideal.

Just to be absolutely clear - I do not question the value of Hasmada Rabbah – great  devotion and diligence to Torah study. Obvioulsy that is a positive trait that we should all aspire to. But to take a positive value like Hasmada to the extent they ascribe to Rav Elyashiv is to belittle both him and the very concept of Hasmada.

I can assure everyone that ignoring your children to the point of endangering their lives is absolutely not a Torah value. It is against the very Torah itself! The people to blame here are not the Gedolei Torah like Rav Elyashiv who had much more Hasmada that most people. It is the editors of Mishpacha and like minded individuals who feel that only positive stories may told in biographies and may be exaggerated to make them even “more inspiring”. How ironic it is that it is Rav Elyashiv that has now fallen victim to this kind of “truth”. If there was ever a reason to stick to the truth – this is it!
Posted by Harry Maryles at 11:42 AM