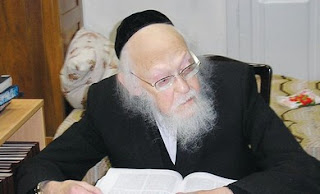 I am saddened to report the news of the death of a great man.  Rav Yosef Shalom Elyashiv passed away this morning at Shaare Tzedek Hospital surrounded by his family. He was 102 years old.

Rav Elyashiv was a Gadol. There is not a doubt in my mind about it. He belonged to the previous generation of Gedolim that included names like Rav Moshe Feinstein, Rav, Aharon Kotler, Rav Yoshe Ber Sololveitchik (The Rav) The Lubavitcher Rebbi and The Satmar Rebbe… and many more too numerous to mention.

These were all great men, Gedolim unlike anyone alive today - with the exception of Rav Ovadia Yosef who is also in that category. Even though the Hashkafos of each and every single one of the aforementioned Gedolim are different - in some cases radically so, they were nonetheless great people who in effect changed the world.

Even though I found myself at times questioning some of the things that were said or done in Rav Elyashiv’s name, I completely honor his integrity. He like the other Gedolim of that era was a man of principle and never wavered from his convictions.

It is only a shame that near the end of his life there were some unscrupulous rabbis (Gadol Wannabees) who were able to get close to him – and took advantage of his advanced age to manipulate a desired Psak out of him. Or worse used his name without his permission or knowledge as a signatory to an edict or ban they (in their own arrogance and ignorance )only assumed he would have signed.

This does not detract from his greatness. It only diminishes those with ambitions and pretensions of succeeding him.

There are a lot of brilliant Talmidei Chachamim in the world today. Many of them very worthy and principled people. But I don’t see anyone in a league to be able to take his place. He is the last of that generation. With all that is going on in the Jewish world today, the current rabbinic leadership seems to be falling well short of the task. They are not leading. They lead by constantly looking over their shoulder. The right shoulder.

I have said this before. The previous generation of Gedolim, of which Rav Elyashiv was a member, were in a class by themselves. They had continued a tradition of Gadlus that existed in pre Holocaust times. They were ‘old school’ in the best sense of the word. With Rav Elyashiv’s passing that generation is almost gone.

It is true that every generation that is further removed from Sinai is of a lesser stature than their predecessors. That is no less true today than it was in the days of Chazal, the Rishonim, and Achronim. But there were major separations between those three eras. My Rebbeim have taught me that we are in the last such era. Achronim  - “the last ones” will no longer be offset by a new era the way it was from the era of the Rishonim.

I must confess, however, that from my vantage point the difference between Rav Elyashiv’s generation and today’s generation seems to have that same sort of chasm. But only history can judge that.

Rav Elyashiv will be sorely missed. Baruch Dayan Emes.
Posted by Harry Maryles at 10:58 AM