Why Don’t Charedim Pray for the Soldiers? 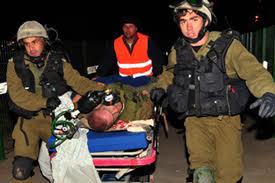 One of the most perplexing things about the Charedi world is their refusal to say any kind of Tefillah (prayer) for the soldiers of the IDF. This question was asked recently by a participant in one of those ‘Town Hall’ meetings held by Mishpacha Magazine for purposes of convincing various communities of the rectitude of their position on the current situation in Israel. Mishpacha publisher Eli Paley responded with the following:

Go into any chareidi yeshiva during a time of military action or danger in Eretz Yisrael and watch the intensity of feeling on the faces of teenagers, how serious they are by the psukim of Tehillim. Because chareidim don’t say the nusach you’d like them to, that means they don’t pray for their brothers and sisters? Reciting a tefillah with real concern is real sensitivity. Their tears answer your question.

The problem is that it does not answer the question. It only reinforces it. They only time they seem to Daven (i.e. say Tehillim) is if they feel the Klal is in imminent danger – a Klal that includes themselves and their families. Not that they only Daven for themselves… they do indeed Daven for all of Klal Yisroel.

Apparently no one at ‘Town Hall’ meeting challenged Mr. Paley’s response. If anyone did, it has not been reported.  We are supposed to accept that saying Tehillim in a time of war is the same thing as praying for the safety of a soldier on a regular basis.

But it is not the same thing. These soldiers’ lives are on the line every day. I guess that if you are a solidier, that does not merit special prayer. If you are a soldier, you’re on your own… unless there is a war, then we pray for you along with everyone else we pray for. (And now even Charedi soldiers lives are in danger in places like Meah Shearim.)

What an arrogant response. No one questions the sincerity of a Yeshiva student who in most cases pray with great sincerity when called upon situationally to do so. The question is why they do not do so on a regular basis. The answer can be gleaned from part of Mr. Paley’s response:

Because chareidim don’t say the nusach you’d like them to, that means they don’t pray for their brothers and sisters?

Putting it that way shows condescension. The real reason they do not use that Nusach (composition of the prayer) is because of the absolute rejection of Zionism in any form. Using a prayer written by any Zionist entity – even a religious Zionist entity - would mean that they somehow recognize their authority. And as we now know, that would be like recognizing Amalek.

Of course they did not say that at the meeting. They decided to respond to the questioner by showing how sincere they are when they do pray. Had they been honest they would have admitted that they won’t say any prayer written by a even a religious Zionist entity. Even though they might agree that Religious Zionist rabbis are not necessarily themselves evil (until now that is – ask Sephardi rabbinic leader, Rabbi Shalom Cohen) ...they still feel that that the hand of Satan (i.e. the Zionist State) had a hand in it and it therefore has no legitimacy as a prayer. (Perhaps they feel it is even forbidden to say it!)

And how do these Bachurim otherwise react when our people are being attacked by rockets? Well, yes - they do say Tehillim. But they do so from a place of safety. If they are anywhere in range of those rockets, they are told by their Roshei Yeshiva to ‘get the heck outta there’ - and fast!

Now I don’t really have a problem with civilians being re-located to places of safety during times of war. Even though one will say that learning Torah L’Shma (for its own sake) and doing Mitzvos is protective – one is not allowed to place oneself  in a Makom Skanana  - a dangerous place. The Torah you study and Mitzvos you do will not necessarily protect you if you do something like that. Fighting wars on a battlefield while under attack is what the army is for. They are there to protect those civilians. For me this makes the fact that they do not say any special prayer on a regular basis even more troubling.

Which leads me to another suggestion made by Rav Yosef Yashar, the the Chief Rabbi of Acco. From Rafi’s blog:

This idea while perhaps well intentioned, misses the point of the Teffilah itself. The purpose of this Tefillah is to protect soldiers - many of whom are put in harm’s way every day. Yeshiva students are not put in harm’s way at all. That they contribute spiritually to the safety and welfare of Klal Yisroel does not require a special prayer of safety for them. They are as safe as any other civilian.  Mostly because of the Hashtadlus (sustained effort) of the IDF soldier. This is how God has chosen to protect His people in our land at this time. Charedim need to recognize that too… and to say that special prayer for them.

What does the prayer written by the Israeli Rabbinate actually say? Here is the official English translation of the Hebrew text:

He Who blessed our forefathers Abraham, Isaac and Jacob - may He bless the fighters of the Israel Defense Force, who stand guard over our land and the cities of our God from the border of the Lebanon to the desert of Egypt, and from the Great Sea unto the approach of the Aravah, on the land, in the air, and on the sea.

May Hashem cause the enemies who rise up against us to be struck down before them. May the Holy One, Blessed is He, preserve and rescue our fighting men from every trouble and distress and from every plague and illness, and may He send blessing and success in their every endeavor.

May He lead our enemies under their sway and may He grant them salvation and crown them with victory. And may there be fulfilled for them the verse: For it is Hashem, your God, Who goes with you to battle your enemies for you to save you.

This is the ‘evil’ prayer that Charedim refuse to say. This! ...they consider blasphemy. Instead, they wait until the rockets are falling and then they say Tehillim (with tremendous Kavanah, no doubt)… in the safety of their Beis HaMedrash.

Here is my response to them: SAY THE TEFFILAH! Say it as written - or compose your own! Say it regularly. Stop politicizing it. You are playing with the lives of the people that God has chosen to protect you!