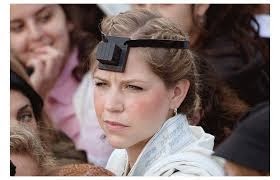 Apparently there are now some Modern Orthodox schools that are permitting  their female students to lay (put on) Tefilin during Shacharis. First it was the Salanter Akiba Riverdale (SAR) and now Ramaz.

The fact is that there is no Halacha forbidding women from this religious ritual that I am aware of. But there is a religious principle that women are exempt from observing certain Mitzvos (positive commandments like Tefillin  that are time bound).  Even though women are exempt from such Mitzvos, they may if they so choose - observe them. There are many examples of this like Sukkah and Lulav. These are Mitzvos that are time bound from which women are exempt and yet the vast majority of observant women carefully observe them. But with rare exception (Rashi’s daughters?) the Mitzvah of Tefillin has never been one of them.

In our day, it is still a rare occurrence, but we are beginning to see a lot more of it – as the above shows.

I am not a fan.  I can’t help but to believe that the source of such behavior is at the core based on the feminist notion of equality with men. Bolstering this view is the fact that Jewish feminist groups like JOFA have applauded this move which of course means that it advances their cause. From the Forward:

An Orthodox feminist leader strongly backs the decision by SAR to allow girls to pray with tefillin. “I’m pleased whenever there’s an expansion of anyone’s ability to connect with God in a way that is halachically permissible,” said Judy Heicklen, the president of the Jewish Orthodox Feminist Alliance and a parent at SAR. “I’m proud of SAR for going out on a limb to help support these girls.

I believe that there is an element of sincere desire to serve God in this way by these young women. But I have to ask why generally it is only those from homes that tend to support feminism that have any desire at all to do this? Is there for example a single girl at any Beis Yaakov in the world that has ever expressed a desire to lay Tefillin? Are they lacking in their Avodas HaShem?

I have no choice but to question their ultimate motivation. Yes they are sincere. But why choose a particularly male modality and not for example extending their prayers to include additional Psalms? They have been raised  in an environment that sees the equality of the sexes as an objectively positive value and goal to achieve. In fact I actually agree with that – as I have said many times. When it comes to non religious matters – such as equal pay for equal work, I am as supportive as any feminist organization of that. And when it comes to treating the sexes with equal respect and dignity, there too, I am with them 100%.

But when it comes to religious ritual, my feminism ends.  Because for me and for any Jew who is interested in doing the will of God, the purpose is to follow His will and do the Mitzvos that we are commanded by Him to do. While God allows us to do non obligatory Mitzvos and values them, His obvious preference is for us to do those we are obligated to do. This is a principle in Halacha called, Gadol HaMetzuveh V’Oseh,  M’mi SheAino Metzuveh V’Oseh.

When a person does a Mitzvah from which they are exempt, then one has to look at the motivation. If the motivation is based solely on the sincere attempt to do something that is pleasing in the eyes of God, it is laudatory. But if there are additional motivations outside of that parameter, one has to wonder about how much value that really has to God. If a woman seeks equality via practicing a ritual that is the province of men, then is she really serving God? Or is she serving the goals of equalizing the sexes. If the latter, then she is not serving God at all. Because Judaism is not about equalizing the sexes. 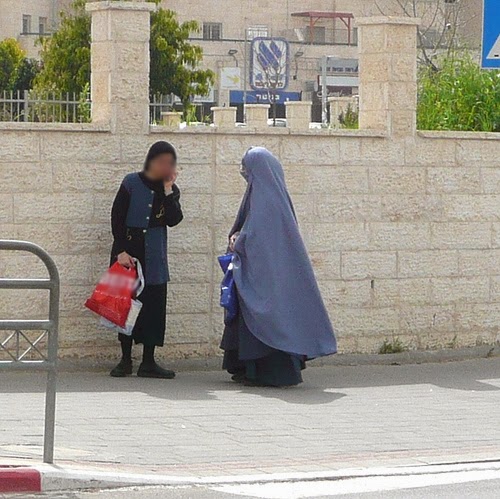 There are those who will and say, ‘What does it hurt us if a woman decides to do a religious act that she is not required by Halacha to do?’ ‘Who are we to judge someone else’s motives?’ This is true.  Is it a little weird? Sure. But it’s really none of our business how people choose to serve God, as long as they do not infringe upon the rights of others. But using that argument, I would posit that women who choose to wear Burkas should be  left alone too. Or perhaps even praised for their heightened sensitivity to modesty in dress!

Is their sincerity any less than a woman who lays Tefillin? I think we have to grant the Burka ladies the same benefit of the doubt. And yet I would be willing to bet that most people, feminists included would seriously frown on this extreme practice, even though it hurts no one. Would Ms. Heicklen say here too  that she was pleased whenever there’s an expansion of anyone’s ability to connect with God in a way that is halachically permissible? I wonder.

Tradition (Mesorah) is important. Doing things that are outside of traditional practices is one of the big failings of our time in my view. It casts aspersions on what our own parents considered valid when we go outside of their tradition. I am reminded of the famous story (urban legend?) about the descendants of the Chafetz Chaim who refused to use his Kiddush cup because it did not measure up the the Chazon Ish’s minimum Shiur for Kiddush.

In my view no matter how sincere they are (and I do not really question the sincerity of most of them), I believe that somewhere in the furthest recesses of their brains, there is a left wing modern Orthodox feminist motive to the former and an obsessive right wing Charedi motive via a preoccupation with Tznius in women’s clothing to the latter.


So, for all these reasons, I am opposed to both. But at the same time, I would not protest it beyond this essay. I would simply let it run its course. Because I do not believe that either practice will remain a permanent part of our religious Jewish culture.
Posted by Harry Maryles at 10:34 AM