The Root of Our Exile – Baseless Hatred* 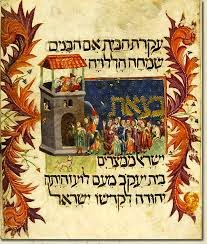 Pesach is the Yom Tov of Emunah. The Nesivos Shalom calls Peasch ‘The New Year of Faith’. This is why we are commanded to retell the story of our ancestors exodus from bondage in Egypt (Sipur Yitziyas Mitzrayim). It is the retelling of this story whereby Emunah instilled in the heart. On that night, the retelling of the exodus story is the foundation of belief and it the key to all miracles throughout the generations.

One of the things we say on this night is ‘Today we are here - next year we will be in the land of Israel’. And we end the Seder with the words  ‘Next year in Jerusalem’. This is an expression of our belief in the coming of the Messiah - an expression of faith about our final redemption.

The Chafetz Chaim notes in in the name of Rishonim in his famous work on Lashon Hara (gossip; evil speech) that in order to be worthy of the final redemption and the building of the 3rd Beis HaMikdash, we have to do Teshuva for the very thing that destroyed the last one – Lashon Hara and Sinas Chinam (baseless hatred).

Dealing with baseless hatred is actually a part of the Seder. R’ Yosef Chaim Sonnenfeld tells us (in the name of the Ben Ish Chai) that the 2 Tevilos (dippings) we do at the Seder (Karpas and Maror)  are a reference to the two dippings in the Torah.

The first dipping is when Yosef’s brothers sold him; took his Kesones Passim (cloak of stripes)  and dipped it in blood in order to fool their father into thinking he was attacked by wild animals and killed. They did this because of jealousy and baseless hatred.

This incident precipitated our ancestors descent into slavery in Egypt. Even though the slavery of our forefathers was foretold to our patriarch Avrahom Avinu at the Bris Bein HaBesorim, the fact that it took place in Egypt was a direct result of the sale of Yosef by his brothers. So in essence this ‘dipping’ was the beginning of our slavery.

The second dipping in the Torah is that of dipping the Ezov – bound branches of hyssop - into the blood of the sacrifice offered by a person who was cured of his Tzora’as affliction (sometimes translated as leprosy). The lowly hyssop – which grows as a low bush is used to show the lowliness of the sin a Metzora is being punished for - Lashon Hara

It is then sprinkled on to the Metzorah as part of the ‘spiritual cleansing’ he goes through after he is cured. We learn Tzora'as is the punishment for Lashon Hara - from what happened to Miriam when she spoke Lashon Hara about her brother Moshe. She was immediately afflicted with Tzora’as.  The bound hyssop is a simile for all of Klal Yisroel to be bound up together feeling extremely small and humbled about Lashon Hara and to therefore avoid falling into that trap and the trap of Sinas Chinam.

R’ Elchanan Wasserman, HY’D makes an interesting observation. Throughout Jewish history, Jews were constantly accused of blood libels. And that usually occurred around Pesach where Jews were accused of killing Christian children and using their blood for making Matzos! Something that of course had absolutely no basis in fact.  It never happened. And yet generation after generation these accusations are made. R’ Wasserman believes that this is no accident. That God in his infinite wisdom wants to repay us measure for measure about our ansecstors’ sin of selling Yosef as represented by the dipping of his cloak into blood.

This indeed was a source of great fear among Jews throughout history who feared being accused of such a heinous crime as kidnapping Christian children for purposes of killing them and using their blood for Matzah -  always occurring around Pesach. It was God’s way of reminding us that the sin of Sinas Chinam still exists and that we should be aware of it – and its consequences. And that it is a huge impediment to our final redemption. And that we should do what we can to rid ourselves of it.

Let us once and for all rid ourselves of the baseless hatred we may have for a fellow Jew - no matter how different they are from us!

With this Zechus may we merit the coming of the Messiah speedily and in our day. L'Shana HaBa B'Yerushalyim.

Posted by Harry Maryles at 8:00 PM