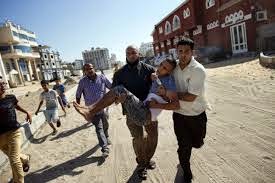 The war continues. Our people in Israel are under constant attack by Hamas firing rockets at them continuously. Non stop.

IDF soldiers are on the front trying to destroy Hamas’s ability to strike us.  From the air, missiles are targeting buildings known to harbor Hamas terrorists and armaments. From the ground soldiers are targeting the hundreds of tunnels used by Hamas to sneak into Israel and harm its people. That has cost us over 30 lives.

This has resulted in well over 700 hundred Palestinian casualties. None so horrific as the 16 that were killed yesterday at a UN school that was used by them as a safe house. In the end - it wasn’t safe. More about that later.

Here is the problem. Hamas’s tactic of assuring mass casualties of civilians is working. Every day on the nightly news we see reporters telling us in somber tones about Israel’s attacks in Gaza while images of dying or severely injured children are displayed on screen being carried or in hospital beds.

There are bloodied bodies all over the place, some dead; some alive.  Overcrowded hospitals are overflowing with injured and traumatized Palestinian civilians. Mostly children. The anger being expressed by Palestinians is palpable. Questions are constantly heard from angry Palestinians in Gaza about why a certain target was hit when there were no terrorists or armaments anywhere near them. UN officials are calling such events war crimes.

I think this situation calls for some clarity. It is imperative to know and hold firm the knowledge about who is; and who isn’t to blame for all this. It is not Israel. Not a single civilian casualty can be blamed on Israel. It is clearly Hamas.

Let us not forget how this carnage began. Hamas started firing hundreds of rockets into Israel without warning after Israel started rounding up Hamas terrorists in an attempt to find the murderers of 3 Israeli teens. Israel did not fire a single bullet into Gaza up to that point. It had no interest in stirring things up. But how much can a country take before it responds? And respond it did. The ‘Iron Dome’ missile defense system has protected them form the massive casualties that surely would have occurred with out it.  Israel cannot rely on Iron Dome alone. It isn’t foolproof. They had to respond by attacking the rockets, rocket launchers and people who operate them.

Hamas is not stupid. They knew that Israel would respond. Although they probably miscalculated the amount of damage their upgraded rockets would do, they knew Israel had an exponentially greater military then they did. They were counting on Israel to respond.

This is why they place their rocket launchers near schools and hospitals. It is a tactic to maximize their own civilian damage when Israel targets them. They have been telling their people to stay where they are and resist Israel with their bare chests. (I heard a Hamas official say that on camera early in the war.)

When Palestinians gets in the way of a missile, they are called martyrs. Palestinians civilians see an Israeli missile and blame only Israel on their dead and wounded. And their hatred of the Jewish people increases. If they would think for a minute they would realize that the death and destruction is the fault of Hamas, the very people they elected to run Gaza.

If Hamas would simply stop firing rockets into Israel, all the carnage would stop instantly. But the hatred of the Jewish people is so embedded into the psyche of the Palestinian people that Israel is going to blamed no matter how much logic dictates against that.

The anger is as strong as I’ve ever seen it. Anger that was generated by yesterday’s attack of that UN school Palestinians were using as safe houses. It is however unclear who is actually responsible for that. Israel is investigating. It could very well be that Hamas itself is responsible. Maybe by accident. Maybe on purpose-  in order to create more carnage and generate more anger. It would not be the first time one of their bullets killed one of their own children and they blamed it on Israel.

But even if Israel did hit them, they were no doubt hit in error trying to pinpoint their rocket launchers nearby.

None of this truth helps Israel’s image though. The world sees Palestinians being killed in mass numbers by Israeli planes and soldiers. It’s hard to blame anyone else when one sees that.

Is Hamas winning the PR war with this tactic? I think they may have won over some converts to their cause with it. But I’m glad to see a recent survey of Americans the majority of whom support Israel entirely on the matter.

Thankfully the United States is still saying that Israel has a right to defend itself against rocket attack and that it has a right to destroy those tunnels. While it is also true that you keep hearing various administration officials telling Israel to be careful about hitting civilians, they must too realize that the massive number of civilian casualties is the fault of Hamas’s tactic for purposes of garnering world sympathy. At least so far.

There are some who are listening to the Hamas claim that they are being strangled by the blockade of their ports by Israel. And that they will stop firing rockets indiscriminately into Israel’s civilian population centers once Israel lifts the blockade and allows good to flow through.

No one should believe for a moment that this is what this war is all about for them. Not that the blockade doesn’t hurt them. I’m sure it does. But Israel is not the only one blockading them.  Egypt (which considers Hamas to be terrorists too) has blocked their entry points too.

Israel is not trying to starve anyone to death. They allows food and vital supplies (like medications) to flow freely into Gaza. The entire concern is that these entry points have been used to smuggle in weapons with which  to attack Israel. Had they not been doing that… and simply wanted to live in peace with Israel and prosper, there would be no blockade at all. By anyone.

Make no mistake about what is going on here. This is about a group of people whose goal is to wipe Israel of the map and clean out the Jewish people from ‘their’ land… the land of Palestine. Until that happens they will never be satisfied. They will continue to work towards that goal in the belief that eventually God will side with them and they will achieve their aims.

Opening up those entry points would negate all of the progress Israel has made to degrade their ability to attack us. Weapons would flow freely into Gaza and they would restock their weapons in far greater number than they had before. And likely with better more sophisticated weaponry. Giving in to this demand would be suicidal.

Hamas has to be destroyed - or at least made impotent. Israel therefore has no choice but to stay the course until they get the job done – no matter what the PR costs are.  It is a moral imperative.