Satmar and Agudah - Some Unfinished Business 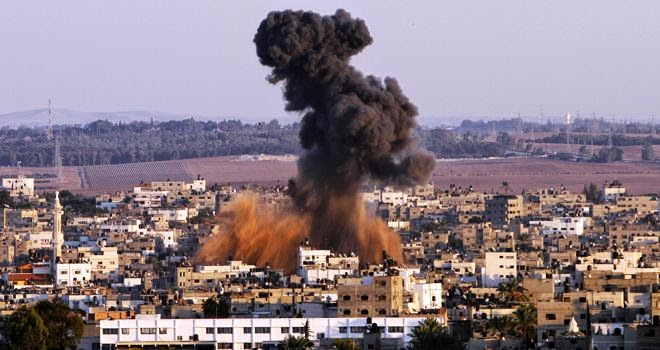 As rockets continue fly over Israel today thankfully there have not - thank God - been any Jewish casualties. And as before the casualties continue to mount in Gaza. That the Palestinian population in Gaza is angry and upset at this is quite understandable. It bothers me to no end, however, that the media keeps coloring its coverage with some kind of moral equivalency. That there are so many innocent Palestinians being killed is seen as unfair. Israel’s military might is too strong. Their response should be in kind.

Really?  Imagine if Israel would respond by firing rockets indiscriminately into Gaza? Would that make everyone happy? That would make things even, wouldn’t it? Imagine the response then. What Israel has done instead is try to minimize any civilian casualties. That they don't fully succeed is the fault of the Palestinians in Gaza. Many of them use themselves and their children as willing shields so as to maximize their claim that Israel doesn't care who they kill.

But I am not really going to dwell on the hostilities in Israel, today. I only pray that they end soon and that no more innocent people are hurt. I want to return to some unfinished business from when this whole thing began. I was going to comment on it when it happened, but when the hostilities began my attention shifted to that.

It seems like ages ago that the precipitating event of the current conflict occurred. Three innocent teenagers were kidnapped and brutally murdered. At the time there was nearly universal sympathy for the grieving parents. There existed for a brief moment of time Achdus among the Jewish people.  It was inspiring even though it was a tragedy that brought it about.

I said  ‘nearly universal sympathy’. There was one particular Chasidic leader, Rabbi Aharon Teitelbaum, who heads the Satmar enclave of Kiryas Joel whose sympathy was politicized. He had the unmitigated gall to blame the parents for their sons’ murder.  Why? Well because they are Religious Zionists living in the West Bank of course. So virulent was his criticism that his message to the grieving parents was that they needed to do some heavy Teshuva for their part in their sons’murder. His hatred of the Jewish State (even if principled) has blinded any sense of compassion and I am thoroughly disgusted by him.

Satmar is famous for their Chesed projects. Where was his Chesed here? What manner of man can blame the parents in the middle of their Shiva for the brutal murder of their sons by Hamas terrorists?!

I am surprised at how callous the leader of Satmar is. This is beyond anything I would have ever expected from someone who has a reputation for caring about every Jew. This has nothing to do with his Shitah opposing the existence of a Jewish State in Eretz Yisroel before Moshiach. It has everything to do with his apparent lack of humanity. Had one of the Chasidim said this, I would have chalked it up to misguided zealotry. But this was the Rebbe himself.

The reaction to Rabbi Teitelbaum’s comments has been universally critical. Ironically a prominent Religious Zionist leader, Rav Aviner was perhaps the most respectful of all in his criticism.

What is absent from the pool of critics is the organization that most represents the Charedi world in America, Agudath Israel. They ignored it.

Rabbi Ron Yitzchok Eisenman wrote an eloquent open letter to Agudah’s Public Affairs Director, Rabbi Avi Shafran asking that they respond to the words of Rabbi Teitelbaum. He asked that Agudah be consistent in criticizing the right just as they are about criticizing their left when they see something wrong.

In a widely distributed response Rabbi Avi Shafran explained that there was a difference between the substance of Agudah’s criticism of the left and what Rabbi Teitelbaum said.  The 2 cannot therefore be equated and criticizing one does not mean the other rises to the level of being criticized by them. Claiming that such criticism will further foment discord, Agudah has chosen to remain silent.

I’m sorry but I cannot accept that. Even if I were to grant that the issues with the left are more serious than they are with Rabbi Teitelbaum, that does not mean they should just ignore him. If fomenting discord was their concern, maybe they shouldn’t have asked Rabbi Jonathan Sacks to apologize for his critique of the Charedi world. That certainly upset a lot of Rabbi Sack’s natural Centrist constituency.

The lack of response to Rabbi Teitelbaum is deafening. The hurt that he generated to the bereaved families who will no doubt hear about it (if they haven't yet) demands loud condemnation. Not silence.  Apparently the only discord they care about is with their right.

I discussed this with a prominent Charedi Rav (who shall remain nameless). He told me that the lack of an Agudah response bothered him greatly. The following were his exact words in response to me:

Don't forget that this is the same Aharon Teitelbaum they had lead Kabbolas Ol Malchus Shomayim (!!!) at their Manhattan rally against Giyus Charedim. At the very least they should have expressed regret over that!

Rabbi Teitelbaum not only hurt the families - he hurt all of us who have been mourning the loss right along with them. Furthermore any Achdus that Klal Yisroel felt with each other because of these boys, is completely lost on Rabbi Teitelbaum. Either that or it's far more important to shout his Hashkafos from the rooftops now than it is to show any real compassion. What better way to get attention than to do it now... and do it the way he did it.

His comments have caused Klal Yisroel great pain and great anger.  And Agudah says nothing. Why? What are they afraid of? I cannot tell you how disgusted I am with Satmar. And how disappointed I am in the Agudah.