I laughed so hard - I almost choked on my doughnut this morning when I read this little news item on VIN:

Israel may have committed war crimes by killing civilians and shelling houses and hospitals during its two-week-old offensive in the Gaza Strip, U.N. High Commissioner for Human Rights Navi Pillay said on Wednesday.

I could not contain myself. Thank goodness my wife knows the Heimlich Maneuver… you never know.

Is there anyone in the world who takes this woman seriously? She is either a shill for Hamas or one of the stupidest people on the face of the earth.

Of course accusing Israel of war crimes is no laughing matter. But to not mention at all the war crimes committed daily by Hamas - sending deadly rockets indiscriminately at Israel into civilian populations is  mind-blowingly prejudiced. As is not mentioning the fact that Israel has agreed to a cease fire and actually stopped its offensive, while Hamas kept firing rockets into Israel. There are so many violations by Hamas, it would take pages upon pages to list them.

Nor does she take into account the fact that Hamas actually wants its people to be killed by Israelis so that people like her can be convinced that Israel is committing war crimes. When a mother from Gaza cries over her dead family, Hamas privately cheers while publicly ‘showing’ the poor innocent lives that have been lost; the severely injured lying hospital beds talking about their losing wives, parents and children, the new homeless  whose homes were blown up by Israeli missiles… This works very well for them. The more damage they have, the more they like it. Israel has no chance of not killing civilians no matter how much they try to avoid it.

And they try mightily. Not only that -  Israel has set up field hospitals near the Gaza border for Palestinians that have been injured. How many Jews can be found in any Hamas controlled hospital? (Hint: Zero). The only thing you can find in a hospital in Gaza (besides the obvious) is rockets ready for use against Israeli civilian populations.

And she chooses to criticize Israel implying a threat to try its leaders for war crimes?! If there is anyone to blame for the innocent civilian casualties in Gaza it is clearly Hamas. They are the war criminals. Period. End of discussion.

While Ms. Pillay may not be the brightest bulb in the room, Neturei Karta (NK) cannot be accused of being stupid. They are simply brainwashed in the extreme to the point of being evil. How else can anyone explain the picture in Al Jazeera of a young Chasidic looking man holding a Palestinian flag at a rally protesting Israel’s attack on Gaza on July 11th? 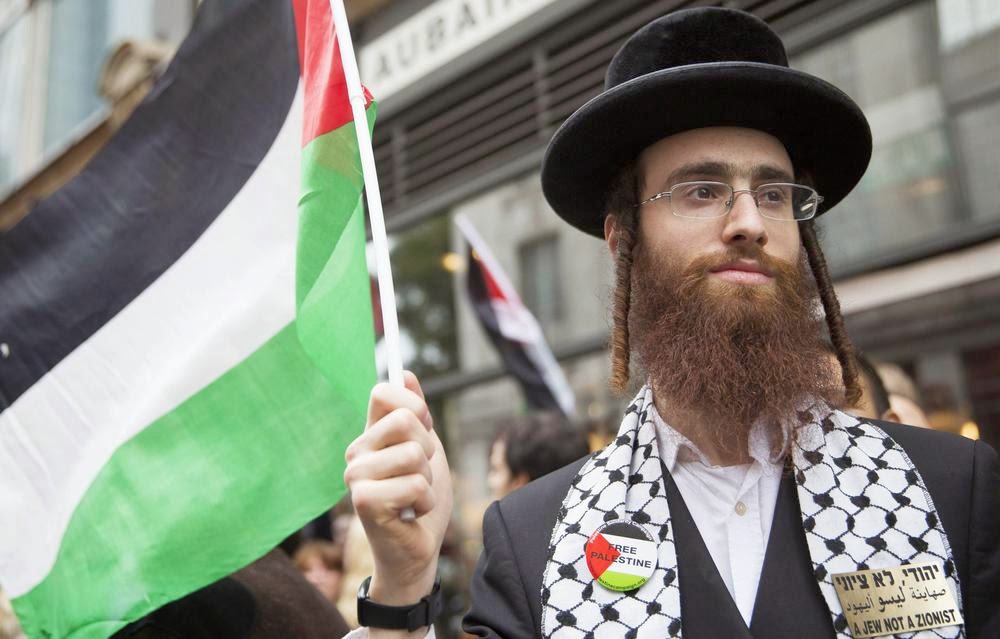 The entire Jewish population of Israel is in mortal danger and this rather well groomed fellow joins with Palestinian protesters and their sympathizers, carries a Palestinian flag, wears a button that says ‘Free Palestine’ and an ID badge saying ‘Jew - not a Zionist’. All while Israel is being bombarded daily with hundreds of rockets. All while Jewish soldiers are risking their lives in Gaza trying to put an end to it. The funerals for the soldiers are heart rendering! ...and this guy stands with their murderers!

Of course the constant refrain I hear from the right is that no mainstream Jewish organization takes NK seriously. Not even the most right wing ones. Even Satmar rejects them. Typically you will hear comments from the right like, ‘There are very few of them - probably numbering less than a total of a hundred or so worldwide and everyone condemns what they do’.

Well, I’m not so sure that that they have no support at all from the right. Unfortunately there is a very prominent Charedi Dayan in England by the name of Aharon Dovid Dunner that has absolutely no problem speaking at one of their protests. I have come across a video from a while back of Neturei Karta in England protesting the disruption of graves at a construction site in Ramat Bet Shemesh. Dayan Dunner had no problem at all speaking at their rally. This does not look to me like a rejection of Neturei Karta. This looks more like tacit approval of the group, despite their disgusting behavior.

I cannot accept any kind of explanation that says he rejects them but only uses their platform to state his views - which happens to agree with them in that instance. That would be like joining with Hamas in support of Tznius in women’s clothing. By standing with them, you imply their legitimacy no less than standing with the Conservative or Reform movement implies legitimizing them.

Dayan Dunner is a respected figure in the mainstream Torah world. He actually spoke in Monsey’s Ohr Somayach, a mainstream Yeshiva for Baalei Teshuva. (Photos of the event are available here).

I call upon the Jewish world to reject not only Neturie Karta, but to reject Dayan Dunner who by his mere presence on the same stage with them tacitly approves of them.  I would also ask that Ohr Somayach of Monsey express regret in inviting him to address their members.
Posted by Harry Maryles at 11:07 AM