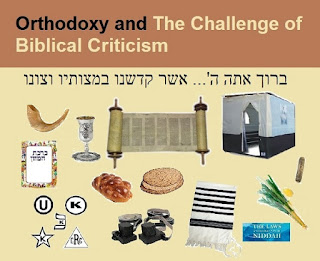 For those that have no clue about biblical criticism, it involves an academic scholarly analysis of the bible. Modern scholarship draws upon a wide range of scholarly disciplines like archaeology and anthropology.  Modern scholars do a literary analysis of biblical texts and along with these and other disciplines have concluded that various portions of bible were very likely written by different people in different eras. Which of course leads to the conclusion that the biblical narrative cannot be literal, nor was it written by one man (Moshe Rabbenu) to whom God dictated the literal text – a long held fundamental belief of Judaism

This has led to speculation about whether the Torah is of Divine origin – or just made up using pre-existing codes of law and adapting them for a small nomadic group of people called the Jews. Or perhaps that the Torah was in fact divinely inspired by God to people who wrote it down as God’s law. So that even though the narrative is not true it was the vehicle used to transmit God’s law.

Either way, it is Apikursus. Even the latter view which some Orthodox Jews have unfortunately adopted after accepting bible critics’ arguments which they find compelling.

I personally find it impossible to believe that the entire narrative of the Torah never happened. ...that it’s just an allegory used to convey God’s message.  Because that would make it a lie. Basing belief on lies is not the best way to find God.

At this point, I feel the need to issue a warning. I am not going to allow any debate on this subject, since it is a no win proposition. This should not be taken as an inability to defend traditional beliefs in the face of the arguments of the bible critics.  I am simply not going to host a debate that may lead people astray. Too many very smart people are already buying into it. Even if the bible critics are successfully refuted here, there will be some who will end up with heretical views via the arguments made in favor of it. I do not want to be responsible in any way for contributing to that.

So why do I bring it up?

I have been monitoring a private online discussion on how to best deal with exposure to it. It is painfully obvious to me that exposure to it has taken its toll on far too many people and has at best made them Orthoprax. Meaning that tragically - even if they stay observant, their beliefs have become heretical.

Some argue that observing the Mitzvos is what God really wants. Judaism is about actions, not belief. But it is beyond ridiculous to say your actions based on following God’s will are based on a  narrative that did not happen - even while that narrative clearly says it did. It almost makes more sense to say that if the Torah narrative isn’t true, why bother with it? Ethics? Morals? There are ethical and moral codes outside of the Torah.

The best way to prevent losing one’s faith via the bible critics is to first understand what it is. It is then important to have the best and brightest religious minds that understand it - discuss it with you and tell you why they still believe in the traditional theology.

One of the criticisms of Yeshiva University is that they actually teach biblical criticism on the secular Limudei Chol side. It is taught by professors who often actually believe in it. Which may lead some students to buy into it themselves. It is a legitimate question to ask; How can this be good?

I have been told by students of Rav Yoshe Ber Soloveitchik that when asked about it - his response was that the biblical criticism studied in the afternoons is countered by what they studied in the morning in their Limudei Kodesh.  They are in effect  ‘vaccinated’  against the Apikursus. A similar response was given by Yeshiva College (YU) founding president, Rabbi Bernard Revel when he was challenged by it.

The counter to that from one individual on that online discussion was that when these students end up in Ivy League schools, their "vaccinations" turn out to be useless. That was followed by the claim that it was the Modern Orthodox kids that are going abandoning Orthodoxy in droves.  Not the Yeshvish kids – even without those ‘vaccinations’.

The question then arises whether preparing students for encountering the Apikursus by teaching them what it is while they are still in a Yeshiva environment is a better option than isolating them from any possible encounter with it?

Isolation might work. - if it is permanent. But the fact happens to be that isolationism will very likely go the way of the dodo bird as an article in That is because of the internet. All the Asifos (public gatherings) and bans in the world is not going to stop people from accessing it. Even with the concession that it is impossible to ban and instead using filters, that will not stop the Apikursus. At best it will stop the pornography. And that’s only if they honor the ban. It is becoming evident that even in isolated conclaves like Kiryas Joel and New Square - where rules are strictly enforced - that people are cheating. Increasing numbers of Chasidim have two smartphones. One filtered and the other not. Which they use when no one is looking.

What happens when a Chasdishe youth from one of those isolated communities comes in contact with Apikursus? Is he more immune it than a Modern Orthodox student that has been exposed to it while still in the Yeshiva? I think not!

If isolationism is beginning to show some big cracks then obviously sheltering will increasingly not work. The Internet is becoming so pervasive that before long it will be as difficult to live in the real world without it as it is now to live without a telephone.

When someone who was so strongly sheltered encounters a website that answers their questions with Apikursus that sound so reasonable, they will be a lot worse off than those who have been 'vaccinated' against it educationally.

It is true that vaccinations against Apikursus aren't foolproof. But they certainly help. A lot more than being completely ignorant and unprepared.
Posted by Harry Maryles at 11:46 AM