Empowering Women at the Kotel 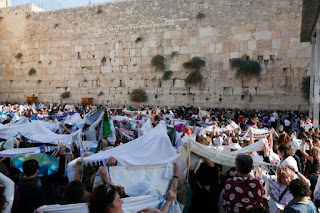 Among the many duties of the Kohanim (Temple Priests) is the charge by God to bless the Jewish people. This is called Birkas Kohinim or Nisiyas Kapayim - the raising of the hands. This blessing is recorded in the Torah word for word. It was done daily in the Beis HaMikdash. Kohanim are to raise their hands and say those words.

It is God's desire that this blessing be transferred through the hands of the Kohanim. Only Kohanim may do it this way. Non Kohanim may not. Although they are permitted to use these words to bless others informally. Commonly this blessing is said by a father blessing his children before Shabbos or Yom Tov. But this is not the same as the blessing given by the raising of the hands – a privilege granted only to Kohanim.

What about a female Kohenet? May she raise the hands and recite this blessing the way male Kohanim do? Let us first look at what a Kohen actually is. The Torah is very clear about this. Kohanim must be direct male descendants of Aaron, the first Kohen. Although a female descendant has certain rights and privileges that a Kohen has, she does not have any service rights. She may not perform any of the Temple services. And if she marries a non Kohen, she loses all Kohanic privileges.

This is not sexism. The Torah assigns various roles to different segments of Jewry including male and female segments. It has nothing to do with who is better or more empowered. The Torah defines the role of a Kohen, the role of a Levi; the role of men and the role of women. Judaism is not egalitarian by its very nature.

There are some things that are mandated for only one segment that are  nevertheless permitted to another segment. But not all things.  As noted non Kohanim and female Kohanot are forbidden to perform the Temple service. And since Nesiyas Kapayim is considered part of the Temple service, they are forbidden from doing that too.  Although they may say the words of the priestly blessing, they may not do it with raised hands.

Nesyias Kapayim has become a tradition at the Kotel every Yom Tov. It’s quite a sight to behold. Not to be outdone, the Women of the Wall have announced their intent to do it too - in the female section of the Kotel Plaza. Why? They say why in a Facebook event notice. It is to empower women. They have invited female Kohanot to do Nesiyas Kappaim at the Kotel on the 1st day of Chol HaMoed Pesach.

I’m sorry. This is just plain wrong. What is gained by making this spectacle? Why do they feel the need break yet another tradition? What purpose can they possibly have other then what is stated on their website – to empower women? Why do something that will no doubt cause a tremendous disturbance to the regular prayer goers who prefer traditional prayer? Why invite yet more violent protest by zealots who may once again rear their ugly heads?

I’m sorry. Female empowerment is not a reason to violate tradition so publicly and cause a probable disturbance. Regular attendees at the Kotel prefer praying in the traditional way that has been the norm since the Kotel was restored to us in 67. This spectacle will no doubt invite even more hostility than we have experienced to date. What kind of spirituality will they have if that happens?


I therefore urge the Women of the Wall to reconsider this ill begotten idea and refrain from doing it. If they truly care about preserving the sanctity of the Kotel and preserving the spirituality that so many feel when they are there, they would be wise to avoid doing anything that will cause disruption, disturbance, and possible violent protest. Please. Let us not have the attitude that ‘I’m going to do this no matter what because it empowers me’. Judaism is not about empowerment. It is about doing the will of God.  And I don't think doing this is in that spirit.
Posted by Harry Maryles at 11:32 AM