Being Blind to Corruption Does Not Equal Compassion 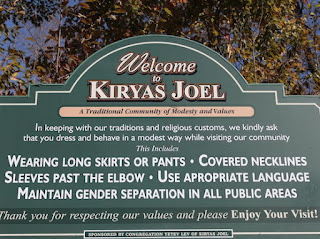 It is a pretty unflattering picture. There is no other way to read an article in the Forward about the city of Kiryas Joel. And protestations from the Rabbi Aharon Teitelbaum, the Satmar Rebbe of Kiryas Joel, only seem to make matters worse.

The fact is that a city like Kiryas Joel is a wonderful place in which to live if you are a Chasid and adhere to their rules. No less a critic of such places than Shulem Deen has said as much. Shulem, one might remember, was a member of a similar city (New Square) whose restrictions and rules were virtually identical to those of Kiryas Joel.

Kiryas Joel is a city where everyone is family. I doubt that are more than a handful of residents there that would not give you the shirt off their backs to help a fellow Jew of any stripe – even if they are completely irreligious.

The joy they feel in being Jewish – more specifically Satmar Chasidim is palpable. The poverty is great. And yet this may be one of the happiest towns in America. There is little if any crime. People can leave their doors open and not worry about being robbed. They love their Rebbe, who is their spiritual and even material guide. They rely on his wisdom in all matters.

This relieves them of responsibility in making important decisions in life. The Rebbe knows what’s best. They are content with a life filled with Chasidus. They willingly live in virtual isolation from the rest of the world – believing its influences to be evil. Instead they enjoy doing what they do - oblivious to what goes on outside of their world, and not caring a whit about it.

One may therefore conclude that an article like the one in the Forward (and many others like it) is there for only one purpose: to smear Charedi Jewry, with lies, exaggerations, and innuendos. Thus causing an upheaval in their lvies

However, as much as I believe that the Chasidim of Kiryas Joel are happy and wish to be left alone, I also believe that an article like this one exposes deep underlying problems that need to be corrected. Problems that include questionable practices with respect to government financial assistance programs; ignoring New York State requirements for secular education in their schools; and the ‘in house’ way in which they handle sex abuse… which seems to favor the accused over the victim.

The first two of the above are related. When you do not give your children the tools to make a decent living, they have no choice but to rely on government assistance when they become adults and have large families. They therefore are told to use all means necessary to maximize that assistance. Sometime that entails nibbling at the edges of legality; sometimes crossing that line; and occasionally severely crossing it.

Nonetheless Rabbi Teitelbaum has condemned the scrutiny taking place right now. He (and perhaps the whole community there) feels that they are under siege. Here is how he put it:

“Until now there were also strict laws, but because we live in a kingdom of benevolence [a reference to government authorities] to put it bluntly they simply turned a blind eye to what’s going on by the Jewish children,”

“They didn’t want to look, the benevolent kingdom. Now, too, they’d continue doing that, the government would have continued, they’re happy not to look and not to know. But these worthless people are stirring up in various ways and are demanding in court, forcing the government that they should take a stance.”

“Due to our many sins, it’s very painful to talk about it, there stood up several worthless people from our own who have studied in Hasidic yeshivas, and sadly they arrived I don’t want to say where. They decided to wage war against the whole ultra-Orthodox Jewish community of New York,”

“They went and snitched to the governments of New York City and New York State with complaints that the students of the yeshivas, of all yeshivas (elementary and middle school) are not learning enough general studies as required by law.”

It’s interesting that Rabbi Teitelbaum considers turning a blind eye to their world an indicator of being a benevolent kingdom (Malchus Shel Chesed). But what a terrible way to see government laxity on issues of legality that were created for the benefit of all citizens – including those that live in Kiryas Joel. This is not what I think of when I say the US is a Medina Shel Chesed. The government turning a blind eye to breaking the law is instead a government shirking its duty. I would in fact characterize the enforcing these educational requirements themselves as an act of Chesed. As I would making sure that all financial assistance complies with the law.

The Rebbe labels those deemed responsible for this government crackdown snitchers (Mosrim). I would call them heroes. They are the ones who lived in these kinds of  communities and know quite well what their citizens are being deprived of. And they say that there are many in that community that secretly agree with them – but stay quiet fearing the consequences of dissent.

The ‘snitchers’  - says the Rebbe - have decided to wage war on the entire Ultra Orthodox Jewish community of New York. I believe that is a ridiculous charge.  There is absolutely no war against ultra Orthodox communities that comply with the law. It is only against communities that don’t.

If Rabbi Teitelbaum would ever read these words (which he probably never will)  he would say that I too am waging war against them. But that doesn’t matter to me since I know that I am not.

That said, most of the Chasdim in Kiryas Joel would probably agree with the Rebbe. They would say that I am a nobody compared to him and have no right to contradict the words of this holy man. He knows what’s best for his own community. Not some Modern Orthodox Jew that has no clue about what’s going on there. I fully agree that Rabbi Teitelbaum is a huge Talmud Chacham. I am indeed an ignoramus compared to him. But that doesn’t mean he is always right.


I don’t know where this will all end. The government may back down or find some sort of loophole that will allow Kiryas Joel to continue with business as usual. But that will be sad for the Chasidim of Kiryas Joel. They cannot keep producing people that are unable to support their large families and expect the government to fill the gap. At some point as their numbers increase exponentially the government will just say no. What will they do then?
Posted by Harry Maryles at 10:40 AM