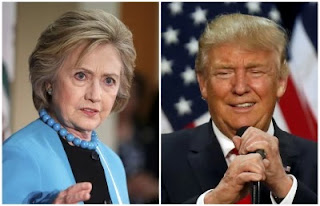 I therefore stand by my prediction that he will be elected the next President of the United States, despite the fact that he may very well be the least qualified person in history to have ever run for that post.

Not only is he an ill mannered boor that has embarrassed this nation by his mere presence in the Republican primary, he is an individual with absolutely no core values. At least none that are evident. His views on core issues have radically changed from what they once were. I believe that is because of the constituency to which he desires to appeal. On the issue of abortion he was pro-choice not that long ago. Now he is pro life. On gun control he was against assault weapons. Now he is in favor of them.

The disgusting things he has said about opposing candidates – which are generally off limits in any kind of dignified run for any office, let alone the Presidency is an almost every day affair. His recent mention of Bill Clinton’s reputation for sexual escapades (some of which include accusations of rape) is his most recent attack on his likely opponent in November. Trump’s own inglorious past on this issue does not stop him from talking about Hillary’s husband.

The media has been extremely hard on him. Their portrayal of his candidacy would have made any other candidate disappear a long time ago. The media never misses a beat in finding fault with something he said, whether it is about foreign or domestic policy or about his penchant for hurling insults at reporters that have said something about him he didn’t like. For late night comedians he is a dream come true, providing an endless treasure trove of material with which to ridicule him. But instead of laughing him out of contention, his appeal  keeps growing.

He has absolutely no experience in governing. Knows little about foreign affairs or domestic policy. His negatives are through the roof! Most voters in this country just don’t like him – even as they don’t much like his opponent either.

I have only scratched the surface of how disgusting this guy has been. In short, there  seems to be little redeeming value in this guy. He has zero going for him, in my view. And yet, I predict he will win the election. Why? Because as Trump has himself has said, it doesn’t matter what he says or does. No matter how outrageous. . He could shoot someone in the middle of Times Square. It doesn’t matter. Sane people in the Republican party have voted for him. And sane people in the general election will vote for him.

If you are a Democrat, you might be tempted to say that GOP voters are a bunch greedy rich people that could not care less about anyone beneath their station - or just plain old  country bumpkins who do not understand who or what they are voting for. But that is a misreading of what’s really going on in my view. There are plenty of smart people that are supporting him. I have spoken to some of them. It actually shocks me to hear them talk about how they are going to vote for Trump… knowing all of the above. Which they discount by saying he is better than the alternative.

There are those still arguing that in the general election people will never vote for such an unpredictable unqualified megalomaniac… that most people in this country understand that a man like Trump would be an unmitigated disaster. That his nomination came about in a Republican party of full of fools but who will be a minority of the electorate in November. They quote polls showing Clinton over Trouncing Trump. Well, guess what happened? The two are in a virtual dead heat now. One poll actually puts Trump ahead of Clinton!

Not to mention the fact that a sizable percentage of Sanders supporters (I believe I saw a 17% figure)  that have said they will vote for Trump if Sanders is not the nominee. And he won’t be.

Why is this happening? In my view people are simply fed up with anyone connected to the status quo in government. They would vote for a frog if that was the only candidate running against an establishment candidate like Clinton.

They simply want an outsider and apparently don’t seem to care all that much who that is. Both Trump and Sanders fit that bill. If you are a Sanders supporter and can’t have him, then by default, Trump is that man. They see all the negative stuff about him as irrelevant.  They probably think that once in office he will do the right thing and all that as he gets down to business. And where he is weak in knowledge – he will get the best people in those areas to inform him. And maybe along the way, make some good decisions.

This is not my wish. Just the truth as I see it.

That said, I have not given up on this country. We will persevere and grow – even with a President Trump. The country is much stronger than the Presidency. So for those for you thinking of moving to Canada after the election, maybe hold off a bit and see what happens.
Posted by Harry Maryles at 11:30 AM