Shomrim – the Good, the Bad, and the Ugly 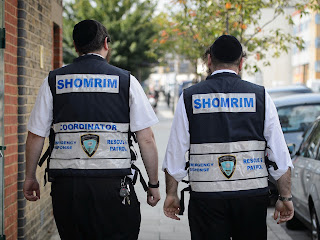 There is much that is good about the Chasidic world. It is a brotherhood like no other. It is that sense of brotherhood that in my view was the impetus for forming the Shomrim Society back 1977. Shomrim are a group of usually Chasidic Jews that are volunteer neighborhood watchmen. Kind of like Curtis Slewa’s Guardian Angels. They patrol Jewish neighborhoods in order to provide protection against things like vandalism, muggings, assault and domestic violence.

The Shomrim Society has spread beyond its original borders of Williamsburg, Crown Heights, Boro Park, and Flatbush . There are now branches in cities like Baltimore, Miami, Lakewood, and London.

The fact is that a lot of Jewish residents in those areas are happy that they exist. They seem to have political support and some (if not universal) police support – who are happy to have some of their burden relieved by them. Shomrim even has some government funding. They not only add an extra layer of protection to those Jewish neighborhoods, they are often seen by Jewish residents as a first line of defense against crime. Their response time is generally a lot quicker than the police.

There is not a doubt in my mind that there has been more than one occasion where an elderly victim was spared a mugging or an assault because of their quick response. And not all of the people they help are Orthodox Jews. According to a 2014 story in the Hackney Gazette:

…around 70% of the victims (in London) they help are not from the Orthodox Jewish community, usually just local residents from any race or religion.

Although I tend to doubt whether that 70% figure is anywhere near in a Chasidic enclaves like Williamsburg, I do believe that if a caller in distress is not Jewish, they will respond to them just the same.

But that is not the end of the story. I have had my issues with these self appointed watch groups. While there may be a benefit to having that kind of protection by one’s own people, there is a definite downside that makes me question their ultimate value.

The truth is I never liked the idea of volunteer neighborhood watch groups. My feeling has always been that despite the fact that theywere created to protect their communities, many of them were basically police ‘wannabes’ looking for adventure but untrained to do police work.

True, they do not carry weapons (thank God). But a lot of damage can be done with a fist. Or a foot. Or a stick. In their zeal to protect the innocent, they will sometimes go overboard. And in some cases hurt innocent people – mistaking them for a perpetrator. Now this can happen to police too. We all know what has been happening on this front these days. Ask the families of mostly black victims unjustly killed or beaten by the police in cities all over this country.

The difference is that the police are trained to know when and how to react – and how much force to use. So that hopefully – as bad as the recent cases of police brutality have been - they are a very small minority of the police department. As a percentage of the whole, the numbers are probably miniscule. There are bad apples in every group. But Shomrim have no such training. Certainly not on the level of the police department.
So, although I am happy that many people have been spared great tragedy as a result of quick response by Shomrim - preventing for example violence against an elderly Jew -  it comes at a terrible price. A price that can best be described in a Forward article by attorney, Michael Lesher. If it were up to him, he would abolish these groups entirely. And with good reason:

The Brooklyn Hasidim accused of beating a young, gay black man named Taj Patterson back in 2013 are reportedly about to get a plea deal so sweet, they won’t serve a single day in prison. Patterson, who was beaten so badly that he was left blind in one eye, and who had homophobic slurs hurled at him throughout the ordeal, is surely having a hard time understanding the aftermath.

I don’t know the details of this case. But it surely smacks of something way beyond protecting fellow Jews. I don’t think that beating and blinding a suspect while hurling homophobic insults at them is what protecting fellow Jews is all about. And this is not the first nor only case where excessive force was used. More from Mr. Lesher:

For too long we’ve allowed a system of Jewish-run patrols to dominate the heavily Orthodox Jewish enclaves of Brooklyn, usurping the role of the official police force (with key support from vote-hungry politicians), despite their record of violence toward non-Jews. And for years we’ve held our tongues as the patrols’ unchecked behavior carried on…

When retired police captain William Plackenmeyer told Newsday in 2003, “In Brooklyn, it almost seemed like there were two penal codes, one for the Hasidic community and one for everyone else…”

When Michael wrote an article in the New York Post exposing some uncomfortable truths about Shomrim this was in part the response he got:

Although several thanked me for telling the truth, a more common note was sounded by a gentleman who informed me by email that “Hitler succeeded to kill 6 million jews only because of such people like you.” “God will make you cry one day so hard,” another prophesied, adding, “I can’t wait for that day.” Summing up the case, one New York City rabbi’s message accused me of “trashing out fellow Jews” in what “may prove to be one of the most treacherous acts of messira [informing] in modern times.”

I am appalled by this response. Whether one agrees with him or not, this is not how to respond someone who has worked so hard to seek justice for victims of sex abuse. Instead of condemning him, they should be honoring him as a role model for the Jewish community.

For me the truth about the value of the Shmorim Society lies somewhere between the 2 extremes of the good and bad they do.

On the one hand, they do offer an added layer of protection to the communities in which they serve. They fill a gap made by not having a big enough police force to properly protect a neighborhood for all crimes, big and small. The police department acknowledges that.

On the other hand, there’s Taj Peterson who was beaten and blinded in one eye by overzealous homophobic Shomrim. Shomrim that are about to get away with it. He deserves a lot better than he’s getting from the criminal justice system.

I don’t know that I would disband them. But I would certainly have people seeking to join them, better vetted for psychological issues; better trained; and subject to the same standards and sanctions for wrongdoing as the police. I would at the very least require every call made to the Shomrim be monitored by the police department.
Posted by Harry Maryles at 11:16 AM