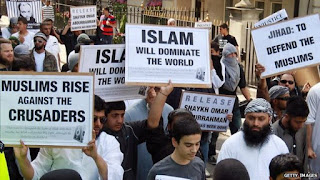 It isn’t just a name. While I agree with the President that using the term ‘Radical Islam’ is not a policy, it is more than just a debate about nomenclature. It is about recognizing the source of the terrorist problem.  That is where the President and the presumptive Democratic nominee for the Presidency are wrong.

They prefer the term Jihadists. And argue that a calling them Radical Islamists will not solve the problem. Futhermore they will say that using the word Islam in the context of terror is counter-productive. Because it paints the entire religion unfairly with a broad brush.

That is simply a false deduction. I don’t think there is anyone that would say that all Muslims are terrorists or radicals. Not even Donald Trump. What we are saying is that the motivation is a religious one that is based on a radical interpretation of Islam. Which is believed by more than a few people and espoused by more than a few of their clerics. The idea of killing infidels is not something made up by the west and applied unfairly to Islam. It is in the Koran.

Whether killing infidels should be done in our day or only in the context of war (Jihad) is a matter of modern interpretation. But to say that what ISIS and other Islamic terrorist groups believe and act upon is not Islam is simply a lie. Or at best a willful denial that it is a legitimate interpretation of the Koran (even though it is not the mainstream interpretation).

What is probably more accurate to say is that most of today’s Islamic theologians and clerics reject the theology of Radical Islam as a modus operandi in today’s world. That they prefer to live in peace with their non Islamic neighbors. But no honest Islamic theologian or cleric would deny that such interpretations exist. Or that it is believed by many of their coreligionists - albeit a minority.

I believe we have to know WHAT we are fighting more that to know WHO we are fighting. Because it is the motivation behind ISIS and their sympathizers. Some of whom - like Omar Mateen - have been inspired by ISIS rhetoric to go the extra mile and act upon it.

We cannot rely on tactics alone. ISIS and other Radical Islamists are not  just a group of crazed individuals. They are devout Muslims fighting for their beliefs. Beliefs sourced in Islam. Unltil we recognize that we are fighting an ideology we will not get anywhere. Because for every terrorist we kill 10 more will rise in their place. And as was made painfully clear (once again) last Sunday night their ideology is spreading worldwide via the internet.

Islamist radicals are winning over hearts and minds of disaffected young people by convincing them of the justice of their cause in contradistinction to the injustice of Western values. They are not sociopaths. They are ideologues - fanatic Muslims out to kill for the highest religious value – the will of God! At Whom they shout Allahu Akbar - God is great! - as they commit their horrific deeds.

That the President and Mrs. Clinton refuse to recognize this publicly is a disservice to America and compromises our security.

Calling them Jihadists implies that these people have no theological basis in Islam for what they do. It implies that they are just criminals with sociopathic tendencies. This is the furthest thing from the truth. The President has to know this. And so too should Mrs. Clinton.

They will counter that we need to enlist American Muslims in our crusade against the terrorists. The vast majority of which are as outraged by terrorist acts carried out by Muslims as everyone else is. The President and Mrs. Clinton have constantly claimed  that by calling these terrorist Islamists they would be alienating and discouraging them from helping.

I agree that we need their help. But I don’t think patriotic Muslims who reject Radical Islamist ideology would have a problem identifying it as such. Most Muslims do in fact reject it  just like the President and Mrs. Clinton say they do. But admitting and saying publicly that some Muslims have a radical interpretation of their religion is no different than saying that some Jews have a radical interpretation of the Torah. As did Rabbi Meir Kahane who used verses from the Torah to justify his actions. Which his ideological heirs have taken to new extremes!

The sooner our government recognizes this and changes course, the sooner we will end this scourge. How we go about that is beyond my pay grade. (Not that I’m paid anything.) I have no clue how to fight an ideology. But one thing seems certain. What we have been doing til now isn’t working. Killing Osama Bin Laden - as emotionally satisfying as that may have been - did nothing to make us safer from terrorism. Even though the President said in 2013 that terrorism is in retreat - does anyone seriously believe that we are safer today than we were when he took office? Maybe we should ask the survivors of Sunday night’s massacre what they think. Or those of San Bernadino a few moths ago.


We need to change course. And we should start by calling terrorists like those in ISIS what they are: Radical Islamists.
Posted by Harry Maryles at 11:01 AM