Yet Another Government Fraud 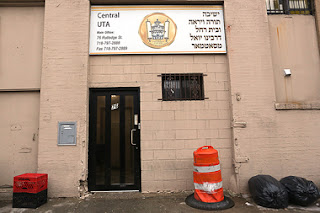 Granted. Modern Orthodox Jews that commit crimes are guilty of creating a Chilul HaShem. And it does happen. Sometimes to the tune of millions of dollars of illegally obtained government funds. I am often criticized for not discussing Modern Orthodox miscreants as much. Fair enough. There is plenty to criticize there. Big time unfortunately.

So why do I always choose to focus on the Chasidic world when it happens there? Partly because there are more stories about them in the media, than there are about Modern Orthodox miscreants. But mostly because in my view the Chilul HaShem is multiplied many times over by the fact that they claim to live on a much higher Torah standard than other Orthodox Jews… and look the part!

That is why I believe their founder, the Baal Shem Tov, chose the word ‘Chasidism’ as the name for his movement. The Gemarah uses the term Chasid about Jews that are the most pious among us. That is how the founder saw his movement. As a group of Jews living a more pious lifestyle than other even religious Jews - by taking upon themselves various stringencies.

This is why they look and live the way they do. With those sacrifices they feel more pious and that is how they describe themselves to the world.  So successful are they at projecting that image, that I recall reading that former President Bill Clinton said he considered Chasidim to be the most authentic type of Jew. That may the reason why – at the end of his second term - he agreed to meet with the Skverer Rebbe, R’ David Twersky, who pleaded on behalf of some of his Chasidim. He asked for commutation of their prison sentence to ‘time served’. (They had been convicted of fraud against the government.) And he got it!

When Jews are so visibly religious and make claims to be the most religious and ethical people in the world - every action they do stands out. When they make a Kiddush HaShem that is magnified. But the flip-side of that is when they make a Chilul HaShem that too is magnified. That’s why I cannot condemn strongly enough what a Satmar Chasid (one of their leaders) was accused of doing. From dnainfo:

Yitzchok Iziel (Isaac) Sofer was arrested by the FBI Thursday morning for filing false claims under the federal food subsidy, SNAP, between 2012 and 2016. He claimed poverty while at the same time taking out a life insurance policy in which he reported making $100,000 per year and having $600,000 in assets, Brooklyn federal prosecutors charged.

Sofer collected $30,516 in food stamps during that period, according to the federal complaint.

For me this is the worst kind of fraud. Maybe not in terms of dollars. But in terms of what kind of example he sets for other Chasidim. It takes a certain amount of Chutzpah to claim poverty in order to supplement a 6 figure income. Surely that income is decent enough to live the life of sacrifice that Satmar’s leaders urge their Chasdim to live.

I’m sure (or at least I hope) that most Chasidim do not abuse the welfare system. Hopefully those that get welfare assistance actually need it and qualify for it. But I have heard too many stories about the type of Chasidic woman that drives up to her local kosher grocery store in a luxury vehicle wearing a fur coat and paying for her groceries with food stamps.

Now I’m also pretty sure most welfare abuse isn’t as brazen. But it would not surprise me if there is a lot more abuse by those that do not qualify but just don’t make enough money to make their ends meet - their expenses being so great. They might just fudge their actual income statements a bit in order to get that kind of financial help from the government.

How much of that goes on – I don’t know. But when a high profile Chasidic leader gets caught doing it, I can’t help but believe ‘there’s a lot more where that came from’. Not to mention the fact that most of these Chasidim live a lifestyle that would cost them a lot more than they claim they make – albeit still very modest by societal standards.

One need not look to deeply to see that. Chasdic enclaves like Kiryas Joel and New Square have some very nice homes and their children are very well taken care of.  And yet these enclaves are known to be pretty impoverished. Their standard of living seems to indicate expenditures in excess of what statistics indicate they can afford. That lifestyle is being paid for somehow.

I suppose that part of their financial relief comes in the form of lower religious educational costs. Not having a secular studies program surely reduces tuition expenses. Which may also be due to the fact that their teachers are woefully underpaid.  But I doubt the savings they get from that allow for them to pay for the lifestyles they lead. Their education may be cheaper. But it isn’t free. Which it would be if they were sending their children to public school. Not to mention the fact that Kosher food tends to be more expensive than non Kosher food… and they feed very large families with that.

So their needs are real. Their incomes are low and their expenses high. Seeking government relief is quite understandable. Even if it means hiding income to get it.  Food stamps really help. So it wouldn’t surprise me if there are more than a few people that abuse the system just so they can make those ends meet.  They do not live high on the hog. They still live relatively modest lifestyles. And most of those that get welfare probably deserve it and get it legally. But how many don’t? If one of their leaders that makes a 6 figure income does it so matter of factly, it isn’t too much of a stretch to believe a lot more are doing it – considering their needs.

The problem is that it is fraud and a Chilul HaShem of major proportions when the most religious looking Jews among us are caught supplementing an income with fraudulent claims of qualifying for government welfare.


I keep thinking that a lot of this could be avoided if their leaders would just allow their people to get the education they need to get better jobs. And yet they refuse to do so – telling them it’s better to sacrifice their material welfare than to be exposed to the secular world’s influences. ...all so that they can live the holier life of a Chasid. How ironic it is by living that way - desperation can lead to fraud. How holy is that?
Posted by Harry Maryles at 10:54 AM