The Right Kind of Rebellion 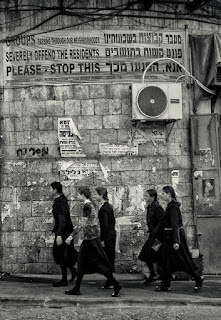 One of the most discussed topics in Orthodoxy today is Tznius. Mainly as it applies to women. On that level I think we are now in uncharted territory. I am not talking about extremist enclaves where different sides of a public street are designated – one side for men and one side  for women. To the vast majority of Orthodox Jews that make up the mainstream that is indeed extreme.  But to the extremists of Orthodoxy – separate sides of the street is a normal expression of Tznius. Even if it means forcing husbands and wives to separate from each other.

The problem is that even in moderate circles some of these extremes have been adopted. It has become an obsession of the right.

There is no question about the requirement for Jews to be modest in our ways. As the prophet Micah tells us (6:8): ‘HaTzne Leches’ Walk modesty with God. But this term has been used primarily as a hammer by the right to apply almost exclusively to women. As a result, many books on Tznius have been written that have raised Chumros to the level of Halacha.

Avital Chizhik-Goldshmidt has written a very thoughtful article on this subject in Tablet Magazine. Although written a few years ago, it is still relavent today. I think we all should pay attention to it because it describes a mindset about Tznius that has taken hold in much of Orthodoxy. To demonstrate what I mean, here is her opening paragraph:

A friend asked me to serve as a match-reference—that is, to attest to the virtues of a prospective bride—for her older (Torah-learned, black-hat-wearing) brother. My friend, apparently, had discovered, through other references, that the young woman in question did not always wear appropriate hosiery.

“I’m just confused,” she told me. “Because I thought you even specifically mentioned that you thought she wears tights, and I would just be surprised if she didn’t wear some sort of socks or tights, based on the level of piety that I heard about her.”

“I must admit,” I said, “I don’t spend much time looking at ankles. I tend to look people in the eye.” Then, sensing my friend’s dissatisfaction with my answer, I added: “But I’m pretty sure she wears some sort of socks.”

This is where we have come to. In America and especially in Israel. Mrs. Chizhik-Goldschmidt describes her experience with a Chardal family. (Chardal is a contraction of the words Charedi and DL - Dati Leumi. It is a term used to describe a Dati Leumi/Religious Zionists that –except for their Zionism are as Charedi as the standard Charedi world.)

(D)uring a Shabbat spent in a Jerusalem suburb with a Chardal (Zionist ultra-Orthodox) family. In front of her guests, my hostess scolded her 16-year-old daughter, “I see your collarbone, Leah. If you wear that shirt one more time, I swear I’ll take it away from you.” The hostess then turned to me, glanced at my coincidentally floor-length skirt, and commented, “You see Avital’s skirt? Girls, you should wear something like that. It’s so tznius.”

I wish I could have shown her the shorter and tighter pencil skirts that I left behind in my closet. Instead I quipped, “Yes, have you seen the Ramat Bet Shemesh women? They’ve taken to wearing burqas. Now, those are really tznius.”

My sarcasm went undetected. “Yes, indeed,” the hostess said, taking her glasses off with a sigh. “Those women are so modest. We can’t judge them, they’re on a much higher level than we are.”

Mrs. Chizhik-Goldschmidt gave numerous examples of how far the extremes of Tznius have permeated the mainstream of the Charedi world even in America. So much so, that even the slightest infraction is seen as a near apocalyptic. When in truth they are at best minor or even just Chumros. Matters of Tznius which are beyond the prohibitions of Erva are relative to the times and the place in which one lives. But as demonstrated by the many examples Mrs. Chizhik-Goldschmidt gave we now see Tznius treated like Erva.

I have heard it explained that the Charedi world has adopted this attitude on purpose - to counter the prevailing exhibitionist general culture in which we live. They are bending the proverbial page back much further to the right – just to get it back to the center.

But I do not by that as a solution. Because when it comes to matters of modesty, there is no going back to the center. There is only moving to the right. Which is why there have been so many examples of extremism that have been defended by even moderate Charedim. Much like that Chardal woman who defended the Burka wearing women as being on such a high spiritual level.

The question is, what can we do about this? How do we change the current march towrad extremes in modesty in our world today?

As in most questions I ask here, I don’t know the answer to that. But one thing I would like to see, is more people  like Mrs. Chizhik-Goldschmidt. She rebelled. Not against Judaism as did many Charedi women that became so disillusioned with the extremes in their lives that they left observance altogether. Mrs. Chizhik-Goldschmidt rebelled to the sociological center of Orthodoxy. Which is the world that I inhabit.

The center is also increasingly the world the mainstream inhabits. But there are powerful forces trying to influence that mainstream to the right with incremental adoption of increased modesty standards. I encourage the mainstream to resist those standards. And strengthen their Judaism where it really counts – in actual observance of Halacha. Not the absurd levels of Tznius we are coming to see so much more of these days. It is in the center where extremes meet to become the norm. And that’s where I believe Judaism best lives and ultimately where it thrives.
Posted by Harry Maryles at 10:47 AM