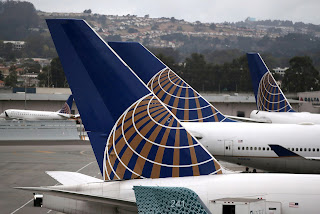 Leggings  (for those of us that are sartorially challenged with respect to women’s clothing) are  tight-fitting stretch pants, typically worn by women or girls. It goes without saying that this kind of apparel is considered immodest by Orthodox Jewish standards. It appears that Orthodoxy is not the only institution that considers it so. United Airlines (UA) feels the same way. At least as far of its own ‘family’ is concerned.

It appears that UA has an actual dress code required of employees and their family members when on board one of their commercial aircraft. (Who knew?)

As it applies to leggings - this is how that rule is stated:

The following attire is unacceptable in any cabin… Form-fitting lycra/spandex tops, pants and dresses.

I believe that most other airlines have similar rules. There are of course other modesty rules. But I focus on this one because of what followed after an instance of enforcement of this rule was made public. From the Washington Post:

At first I thought it rather strange that these teen aged girls were barred from the flight considering the fact that I have seen all manner of clothing worn on female passengers with whom I have flown. In some instances, leggings may have been more modest. To the best of my recollection no one I’ve ever flown with was ever barred from boarding a plane because of what they wore. But then I read the following.


United Airlines spokesman Jonathan Guerin confirmed the two teens were not allowed on the flight. But he said they were traveling using a United employee pass and “were not in compliance with our dress code policy for company benefit travel.”

First let me say that I am happy to see that there is such a thing as a dress code by a major corporation in our day when anything goes. True, it is not applied to paying passengers. But that it exists at all shows that our even in our permissive culture the concept of modesty in clothing is still a value. How long it will last after this debacle (for UA) remains to be seen.

When the news of this broke, it generated a flurry of protests. I have to wonder why it wasn’t obvious to all that this was not business as usual for UA. Have they never flown before? Surely they should have realized that there was something different about this case. Which was the fact that these were employee rule to which regular passengers were not subjected. On the other hand if they did realize that and were still protesting, they were wrong to do so. UA has the right to set its own employee policy. They have every right to expect it to be honored. And they have the additional right to enforce it.

Those that do not like the rule or think it’s unfair, can petition the airline to change it. Or they can call for a protest against an ‘unfair’ rule or boycott the airline altogether. But employees of these airlines know the rules (or at least they should) and they violated them. Which makes what UA did justified.

But that didn’t stop the apoplectic response on social media:

Are people so clueless about the impropriety of form fitting clothing that is so tight that they leave little to the imagination? Has our culture sunk so low that even this is no longer a value except to the airline executives who crafted those rules?

What is really sad is the level of protest. As though UA had forced all of its passengers to wear Burkas. But even more disgusting is who the media focuses on as protesting it. Like Supermodel Christine Teigen who tweeted "I have flown united before with literally no pants on. Just a top as a dress.

Nice. What a  paragon of virtue!

And then there is he queen of smut, comedienne Sarah Silverman. As if she were a legitimate voice in any of this.  She said she was going to boycott UA. I have no issue with her – or anyone else doing that. My issue is about using her as an example in the first place.

This woman is one of the most vulgar comedians on the planet. She loves to highlight her Judaism and then goes about dishonoring it with her extreme vulgarity. In her twisted mind Judaism is just fine with that. But of course that is the furthest thing from the truth. How vulgar is she? In one instance that was posted online - I recall she thought it was funny to offer to perform a lewd act on a man who donates millions to Conservative Republicans if he would instead support her candidate. If what I read in the media about her performances is true, this story is mild by comparison.

Her ‘comedy’ routines are extremely vulgar. Which probably means that her stuff isn’t that funny. Any legitimate comedian will tell you that if you have to resort to vulgarity in order to get a reaction, then you probably wouldn’t get a laugh without it.

Is this the person we want leading the charge? Is she the example of virtue we should be looking at? Not in my book.

In any case, my bet is that UA will end up changing its policy because of this reaction. Which is too bad... as our culture descends even further into an amoral abyss.
Posted by Harry Maryles at 10:54 AM