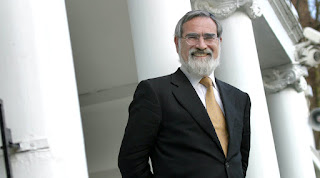 As every reader of this blog surely knows, on Shabbat morning, former Chief Rabbi Lord Jonathan Sacks passed away from cancer, at the sadly young age of 72.

We were close friends for almost sixty years, from our teenage years onwards. We overlapped as students in Cambridge; I wrote and decorated his ketubah when he and his wonderful wife, Elaine, were married; my late wife Judy a”h planned and set up his office when he became Chief Rabbi; and we maintained contact over many years.

In Toronto, I arranged for him to spend a memorable Shabbat in the BAYT shul in Thornhill, where he switched from scholar to Rebbe, leading an incredible Seudah Shlishit ‘tisch’ with hundreds of people.  On the following day Jon, Elaine, Judy and myself had a day’s ‘r & r’ in and around Niagara Falls.  Over the years we met in London and New York.

Since Motzai Shabbat I have been reading the huge outpouring of tributes published in Jewish and non-Jewish media from all over the world.  I can think of no-one else – certainly no rabbi – who has attracted the same unbelievable spectrum of tributes.  Two stand out, testifying to Rabbi Sacks’ unique influence.  The first has to be the tribute from HRH Prince Charles (on Twitter @clarenceHouse). USA readers (and others) should note how absolutely unusual it is for a senior Royal to issue a personal message of this nature.

Prince Charles was the Guest of Honour at Rabbi Sacks’ “Retirement Dinner” in 2013.  But Rabbi Sacks had close personal relationships of trust with many leading politicians and statesmen.  He gave a Chumash shiur to Gordon Brown at 10 Downing Street.  He was the ‘go-to’ philosopher, moral and religious guide to leading European Heads of State – not all of them public, by any means.

The second tribute – from entirely the opposite end of the spectrum – comes from a 17-year old Toronto teenager, writing in a ‘Times of Israel’ blog (“A Teen’s tribute to Rabbi Sacks z”l “ – Times of Israel blogs).  Zev Bell relates how assiduously he has studied Rabbi Sacks’ books, postings and videos (and even recalls his visit to Thornhill!) – “His sheer intellectualism and unparalleled eloquence drew me in like a magnet”.

How many contemporary thinkers – let alone rabbis – could appeal to both Princes and schoolboys with the same intensity?

Add to this the hundreds – and I mean hundreds – of online comments in the UK press which have been added to the obituaries from non-Jewish members of the public, many of which focus on their love and admiration for Rabbi Sacks’ regular contributions to BBC radio’s ‘Thought for the Day’ – a four-minute, reflective spot broadcast every day after the morning 8:00AM news.  (Many, including atheists, agnostics and certainly Christians, defined his short talks as the most spiritually profound of all the varied contributors to this spot.)

Jonathan Sacks was a unique – truly unique – Jewish figure and Rav.  There will no doubt be biographies and studies in the coming years.  At his levaya, which was private, four intensely personal hespedim were given, and they are now online -   The remarks of his youngest daughter, Gila, were the most personal (YouTube – The Office of Rabbi Sacks).   But I think the hesped by his (and my) longtime friend, Dayan Ivan Binstock of the London Beth Din, was the most personal.  He pointed out the genius of Jonathan Sacks; and also, accurately, looked back to his early years in the rabbinate.  Jonathan Sacks – and this was part of his genius – had to learn to be the master communicator he became.

Jonathan Sacks had a world-class brain; on a par with the most famous.   He was regarded as the outstanding Philosophy student of the decade at Cambridge, and in his subsequent career was showered with academic accolades – more than twenty honorary doctorates.  He was offered the highest academic positions in the UK, the USA and Israel, in both Jewish and non-Jewish institutions.  Just before he took up his post as Chief Rabbi, in 1992, he was invited to deliver the ‘Reith Lectures’ for the BBC – roughly equivalent to winning a UK Nobel Prize for Culture.  He won several international awards, including the Templeton Prize.

His analytical ability was formidable, as any reader of his diverse works will quickly realise.  I remember, many years ago, when he was just starting out on his rabbinical career, going with him one Shabbat HaGadol to hear the derashah given by Rabbi Isaac Bernstein z”l, an accomplished Talmid Chacham and marvelous orator, who also passed away at a tragically early age. The derashah ranged over Rishonim and Acharonim, and was a dazzling display or erudition.  Like, I would imagine, 99% of those present, after the first few minutes I just sat back and, as they say, “enjoyed the fireworks”. But on the way home, Jonathan not only replayed the entire derashah, step by step, but even identified what he felt were logical mis-steps in the argument!

His weekly parashah talks (“Covenant and Conversation”) had followings of tens of thousands.  His almost thirty books ranged from inspirational Jewish messages to books on universal morality and ethics, which attracted world attention.  The elegance of his Siddur and machzor translations and commentaries are superb.  He had been working on a new Chumash translation and commentary; unfortunately, he did not live to complete it.

But he was lonely.

Although he studied personally with Rav Nachum Rabinowitz ztz”l for, I think, close on a decade while Rabbi Rabinowitz was in London, and gained semichah both from him and from Rav Nosson Ordman z”l, Rosh Yeshivah of Yeshivas Etz Chaim, he had no formal Yeshivah training.  This cost him dearly.  The Haredi world never lost their deep suspicion of him; he had no institutional Haredi backing.  Even with his passing, the UK Haredi world has been conspicuous in its absolute silence.

But when he retired in 2013, he received high praise from four British prime ministers, three archbishops of Canterbury, and one Roman Catholic archbishop.  Former Prime Minister Gordon Brown asked, “How do you sum up someone who is the greatest scholar you know … the greatest philosopher you know … the greatest writer you know… and one of the greatest thinkers in the world?” John Major talked of the “innumerable hours” he had spent reading his books. The speech by guest of honor Prince Charles (also available online) was an equally remarkable tribute.

His career, perhaps, really took off when he retired.  He determined to spread his message of Jewish meaning through the media.  He believed passionately, not only in reaching every Jew, but on communicating the wisdom of Judaism to a non-Jewish world.  Freed of communal responsibility, he spent a large part of every year in the USA, taking academic appointments at YU, NYU and elsewhere.  He became a most sought-after speaker at conferences in Israel, the USA and worldwide.   He has been described as ‘The Rav of the English-speaking world’.

No-one – but no-one – can replace him.  Baruch Dayan Emes.

Paul Shaviv, originally from the UK, is a retired educationalist, who now devotes his time to reading and teaching Jewish History.

Posted by Harry Maryles at 3:15 PM