Here and There - The Loss of Common Sense

There are two issues that have arisen in the Charedi world that seems to underscore the deficit of common sense among some of its leaders.  One in Israel and one here. (This may sound a bit strange considering yesterday’s post. But it does not contradict it at all.)

Avira D’Ara Machkim. The Gemarah advises that the mere air of the land of Israel makes one wise. I am finding that increasingly difficult to understand for a variety of reasons. Many of which I have discussed in the past. But the latest one baffles me.  It has been dealt with by Rabbi Natan Slifkin and I fully agree with his take on the situation. Which he describes as follows:

...an article in a mainstream Torah journal put out by Machon Aliya, a prominent charedi organization for training people to work in various careers involving practical halacha - an organization with several branches and thousands of graduates...

It asks "Is It Permissible To Steal From The State?"

The answer to which is eventually a tentative ‘no’. But the answer is hardly as important as the question.

There is little more important in Judaism than making a Kiddush Hashem. And to the contrary, there is little more damaging than a Chilul HaShem. Which in my humble opinion is exactly what this article does. In reaching their final conclusion it isn’t about the ethics of stealing. (Or better- lack of them). It is about the pros and cons of it and then weighing in - in favor of the cons. In the course of its discussion this article cites halachic opinions that actually justify stealing! Especially in Israel which they see as more deserving of it because it is ‘anti Torah’.

That kind of rationalization is mind blowing. Publishing it makes it 10 times worse. There is not a doubt in my mind that this article is a major Chilul HaShem.

Making matters worse - it probably has the opposite effect on some readers than its intent – which I assume was to stop people from stealing. It will give some people license to do it by saying ‘Well... there are opinions that permit it - and I really need the money. So…’ adding to this Chilul HaShem is the fact that a prominent Posek seem to indicate that it may even be permissible to steal back the taxes you paid if it in excess to government stipends you received!

What does this say about a Rabbinic leadership - seen by so many people as the most devout among us?!

I find it difficult to believe that intelligent people who I am sure understand the importance of not making a Chilul Hashem can do something like like this. What they are telling the world is that if one is a religious Jew, then stealing from the government is permitted in some circumstances according to some reliable Poskim. This is the epitome of being a Naval B’Reshus  HaTorah, which is how the Ramban interprets the Torah’s admonition to the Jewish people to be  holy.

Not to be outdone - rabbinic leaders across the ocean here in America seem to have shown a similar lack of common sense. the issue here is once again - the internet. As noted by Rabbi  Yoel Schoenfeld in a Queens Jewish Link article.

“How do we explain to our children why there are so many yeshivos encouraging people to join them online [for virtual events] if we have been forever teaching and showing our children that it’s best to stay away from the Internet?” 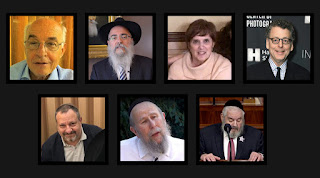 Those of us that use the internet quite freely might wonder what all the fuss is about. But only if they have a short memory. As Rabbi Schoenfeld also notes, 10 years ago the rabbinic leadership in this country believed that the internet was an evil monster of epic proportion that would destroy the Jewish people if not abandoned. While there was little doubt about the ills of this new medium, their way of dealing with it was in my view one of the biggest mistakes ever made by them in recent history.

They actually attempted to ban it entirely under pain of their children being barred from getting a Jewish education (I realize the intent was to get people to stop using it, But if that isn’t pouring gasoline onto the fire  I don’t know what is. How do you justify not educating a Jewish child as a punishment for a parent’s ‘indiscretion’ with respect to a medium whose importance to living life in the 21st century was constantly increasing? But I digress.)

I will never forget the great Asifa held back then. There was a gathering of tens of thousands of Charedim in two stadiums. Rabbi Ephraim Wachsman spoke and warned the attendees about the importance of listening to a Gadol when he addresses the gathered nation of the Jewish people. He said that according to Rabbenu Yona, the great early mediaeval rabbinic ethicist - those who do not follow his words of a Gadol under such circumstances will lose their Olam Habah!

R’ Shmuel HaLevi Wosner who forbade using the internet under any circumstances. That was quickly amended to exclude business use outside the home - and only if filtered. Home use was still forbidden.

That was honored mostly in the breach huge number of Charedim. But the evil nature of the internet was still a widely accepted belief that should ideally be avoided.

Along came COVID.  That changed everything. Making it practically impossible to be without it. Most Charedi families that had resisted it had to scramble to somehow get connected so that their children could study remotely.

That is what generated the above question. How can all these Charedi Yeshivas that are supposed to exemplify the ideal of no internet - now be using it so freely?  How do parents who suddenly have the internet justify it to their children after treating it like the worst trash anyone can have in the home. How can something so evil now be used as a tool; for education? The answers these Mechanchim gave were telling. Which was a a big fat question mark. They apparently had no real answer to that question.

Which is why those of us who saw the attitude of severe restrictions as a huge mistake. Instead of seeing as a valuable tool, they kept saying that the bad outweighs the good. It is true that there are serious problems with this technology. Especially now in all of its various forms. That awareness is not limited to the Charedi world. We all know the tremendous damage internet use has had on society at large. Which is even worse than what was they had originally imagined. But by the same token it has also benefitted society greatly in a variety of ways - too numerous to list

The internet should have never treated as inherently evil. It can and does provide great benefit to mankind. Especially now when our children’s education depends on it. Not to mention being one of the only ways we could connect visually with loved ones that are hospitalized and quarantined.  Or the ability to capture wrongdoing while it is happening - unlike any other time in history.

That was obviously missed by those early anti internet rabbis. They refused to recognize the value of this technology - seeing it almost all as pure evil. Issuing edicts or at least eliciting attitudes that have now come back to haunt them. Educators are now scrambling to somehow explain why the internet can be a blessing rather than the curse it was touted as. I think a good first step would be to admit they made a mistake. But I doubt that will happen.