It's Not What They Protest - It's How 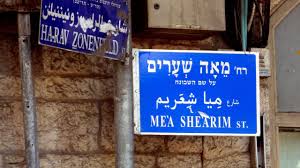 They did not disappoint. I say this facetiously. Because I strongly disagree with what a group of extremist Charedim in Meah Shearim did. It’s just that it is completely predictable. From VIN:

A group of national-religious girls were attacked by extremists while walking through the Meah Shearim neighborhood in Jerusalem on their way to the flag parade on Tuesday. The girls were pelted with water bags and catcalled by the extremist elements…

This is in total character for them. This type of reaction is such a common occurrence, it is barely newsworthy.

But like many other troubling things in the world of Orthodoxy, there seems to be precious little – if anything – that can be done about it. Other than to get the police involved. Which at best reduces or ends the current extremist reaction - until the next time they do it. Which is usually not too far in the future.

There are just so many times I can call upon the Charedi leadership do something that might actualy change this scenario in the future. Such as a clear and unambiguous condemnation of the highest order combined with an insistence those extremists be jailed for maximum time allowed by law. Unfortunately the opposite usually happens. Charedi politicians go to bat for these extremists so that they can escape justice.

That being said, I actually agree with those extremists about what they were protesting. And said so last time this was an issue. The Israeli flag rally was indeed ‘a provocation against the gentiles’. Which in this case means Palestinians.

I absolutely opposed that march for the same reason they protested it.  It was not what they were protesting that bothered me. It was the way they protested it - which is the typical way they do it. It is not only a disgusting Chilul HaShem that paints observant Jews as violent fanatics, but actually undermines their cause. The casual observer is going to see their behavior and ignore the message. Even if - like me - they might agree with their negative view of that parade.

I realize that many of the  Religious Zionist that participated in the flag parade are not extremists. Although I’m sure some of the are, most just want to show pride in their country and assert their God given right to Jerusalem.

But that doesn’t mean they should demonstrate it in that way. It doesn’t mean that it is worth inciting Hamas led Palestinians in Gaza to the point of deadly violence against the Jewish people. Which it appears to have actually done. Deadly Fire Balloons were launched from Gaza into Israel yesterday – ostensibly as a response to that flag parade. Which should not surprise anyone. Hamas is a terrorist organization that will use any excuse to attack Jews.

Israel’s new government under Naftali Bennett responded with airstrikes against Hamas targets in Gaza. Which was the right thing to do. But it should never have had to come to this. As I said in the past, that parade did not do a single thing to help a single Israeli.  All it did was to give Hamas another pretext to try and kill some Jews… and in the process generate more leftist criticism against Israel for their ‘disproportionate’ response.

I wish Religious Zionist leaders would consider the consequences of flexing their muscles this way. It would be nice to not give Palestinian terrorists any excuse to attack Israelis. It would be nice if they would consider the negative publicity generated by even a righteous response by the Israeli military. The ‘Bernie Sanders’ leftists in congress will surely chime in that way, to the delight of the adoring media elites chomping at the bit to report any negative news about Israel they can .

But none of that excuses the way those Charedi miscreants reacted to those ‘flag wavers’. It’s just too bad that nothing of any consequence will be done about it. Which means that it will surely happen again.

Posted by Harry Maryles at 2:05 PM