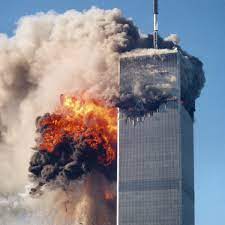 It’s been 20 years. Yesterday, September 11, 2021 was the 20th anniversary of an attack against the United States by the Islamic terrorist group known as Al Qaida. To say that it was horrific is a gross understatement. I will never forget that day. I don’t think anyone alive that day will ever forget it either.

Four US passenger planes filled to capacity with fuel were hijacked by devout Muslim extremists. Two of them were flown into the twin towers of the World Trade Center in a suicide mission. One flew into the pentagon. And one was diverted from it likely target - the White House.   A few courageous  passengers forced it to crash into the ground before it reached its target - giving up their lives in the process. They were true American heroes.

The image of the 2 twin towers collapsing after the 2 planes crashed into them have been burned into my memory for the rest of my life. That day, I was an American like at no other time.  I stood in solidarity with all Americans outraged that this had happened… that it even COULD happen! There were no Republicans or Democrats on that day. No liberals. No conservatives. No race. No ethnicitty. Just one people. For one terrible moment in time all of us were living the American credo of E Pluribus Unum – from the many, one!   In fact the entire civilized world was in a sense ‘American’. They were in solidarity with us.

As the day progressed I thought... ‘Finally!’ Now the world knows more than ever what Israel is going through. Finally - we can identify a common enemy who views America and Israel as a common threat to Islam… and as the source of conflict between Israel and the Arabs. That the crux of that conflict was based on the Islamic belief system.  Radical fundamentalists wanted an Islamic Middle East ruled by Sharia (Islamic) law. They saw Israel as the biggest obstacle to that. And they saw America as responsible for it. Since America was Israel’s strongest ally - supplying them with military aid  America was placed in the crosshairs of Al Qaida, led by Osama bin Ladin. It was Al Qaida that carefully planned and executed the successful terrorist attack on 9/11.

Alas, It wasn’t long before the unity America had that day began to fade as politics came back into focus. My hope that we would all be on the same page were dashed when I started hearing the widely divergent opinions on who was really to blame and what we should do about it.

On the extreme left were those who blamed Israel for that day. Some of the more radical Muslim conspracy theorists actually believed that it 9/11 was really perpetrated by an Israeli intelligence agency (the Mossad) for purposes of making Islam look bad. But the majority of the extereme left simply blamed our support of Israel for this attack and suggested that we ought to change our foreign policy by reducing or severing our relationship with Israel. …that our leaders ought to instead be focusing on our own people than people in a foreign country (Israel).

On the other side of the spectrum were those who saw things the way I described them above. The views of most of the American people seemed to hover somewhere between those two perspectives.

Thankfully, the US under every President since that day were not going to be cowed into changing our foreign policy by terrorists. If anything, the American commitment to Israel strengthened. The US began relying heavily on Israeli intelligence and does so to this day.

Our focus was on finding those responsible for 9/11 and destroying them. Afghanistan was targeted for attack. The Taliban controlled the country back then and allowed Al Qaida to flourish. They were kindred spirits. Their ‘solders’  were allowed to be developed and trained for terrorism.

America attacked Afghanistan and defeated the Taliban quickly. Since then - for  20 years under US military presence, Afghans had basic human freedoms that  until then, the Taliban’s strict religious rule denied them. Most prominently, women could get an education without fearing Islamic retribution.

But Bin Ladin escaped and relocated elsewhere. And Afghanistan was no longer a home to Al Qaida.

To his credit, former President Obama was determined to find bin Ladin. He was eventually found to be living in  Pakistan . The President authorized a clandestine operation by an elite  group of Navy Seals to attack his compound and execute him. They succeeded. Who can forget the iconic picture of the President, Secretary of State, and military leaders watching it happen.

Since 9/11, the US has taken steps to prevent anything like that from ever happening again. Thankfully they have been successful. There has not been a terrorist attack in this country ever since. It helped that Al Qaida was decimated and could not reconstitute in Afghanistan while the American military was there.

President Obama understood the importance of our presence there. When the Taliban started making progress in our war with them, he did not cut and run. He instead authorized a military surge which pushed them back.

Over the last few years our presence has been reduced to about 3500 troops. To the best of my knowledge, none of our troops have been killed by the Taliban there over that time. Those troops – aided by the Afghan military which we trained - were enough to keep the Taliban at bay, keep Afghans free, and most importantly keep Al Qaida from reconstituting. In fact more troops were killed (13) during our evacuation than have been killed by the Taliban in years!

This last point is not insignificant. Al Qaida represented the greatest danger to American security. They were well funded, well organized, and well trained to do it again given the chance.

President Biden has given them that chance by deciding to end our military presence there.The Taliban took back the country in a flash and are now in full control. The freedoms Afghans enjoyed for 20 years are gone. Intelligence experts that I heard interviewed are convinced that Al Qaida will be welcomed back by the Taliban and quickly be reconstituted.

This need not have happened. Had we not pulled out so precipitously, Afghanistan would still be free. And more importantly Al Qaida would have no place to go.

Those who say that we could not stay there forever are wrong in my view. The US has troops stationed in Germany for over 75 years - ever since the end of WWII.  And US  troops are stationed in South Korea ever since the end of the Korean War in the 1950s. If there is a need, we have no reason to cut and run the way we did in Afghanistan.  What greater need could there be than preventing the one group proven capable of hurting us from reconstituting? And in the process keeping an entire country free of extremist Islamic rule?

What have we gained by leaving? Afghanistan is now exactly the same it was 20 years ago before we went in. Only now it is better armed with the weapons we left behind and Al Qaida is poised for return.