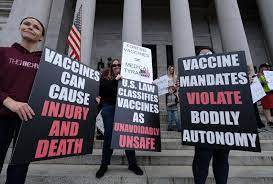 I hate to keep coming back to the same subject. I have dealt with it more times than I can remember. But when I see a story like this, I  feel that I have no choice.  My regard for Emes impels me. Espcially in this case where lives are literally at sake. A headline in a Jewish Press article by Hana Levi Julian reads:

Maybe I’m naïve. But I still don’t get it. How is it possible that supposedly intelligent, rational people can be opposed to vaccines that have proven to save the lives of those that have taken them. And proven to take the lives of people that got infected with COVID that haven’t. The statistics could not be clearer or more stark. Both in terms of safety and effectiveness. The argument made that they are ‘Not ready to be more lab mice’ is pure nonsense!

It is one thing to believe (erroneously) that  the clinical trials upon which an FDA emergency  authorization was made was not reliable enough. That the long term effects could not possibly be known in the short time or those trials. That the vaccines were developed to quickly using shortcuts that compromised the data.

All of that was strongly denied by the medical establishment – people that are dedicated to saving lives via careful scientific research.  They clearly and unequivocally assured us that there no shortcuts at all and that the speed of development was due to the government cutting  red tape - thereby streamlining the process. That all the data was the same as it would have been had the trials taken longer.

Anti-vaxxers simply do not believe them. Preferring instead to believe in a variety of conspiracy theories advocated by alternative news sources that disseminate their drivel on social media like Facebook.

That argument might have convinced some people to be skeptical before 65% of the nation got vaccinated. But not now – over 8 months since mass vaccinations began with hundreds of millions of people worldwide vaccinated without any statistically significant evidence that it caused harm. And statistically significant evidence that the vast majority of hospitalizations and deaths are among the unvaccinated.

Over 700,000 people have dies from COVID. Whether directly or indirectly. Making that argument now is as silly as saying the vaccines make cows sterile. Or that the  government has injected microchips into everyone inoculated so that they can be followed.

Although I would not say that anti-vaxxers deserve what they get – I admit being tempted. But I don’t really believe that stupid people deserve to die from COVID. Which exists for them in statistically far greater number than those who were vaccinated.

How can they not see that?  How can they reconcile their fear of  vaccines with the fact that they have a far greater chance of getting sick and dying if they don’t take them? It makes absolutely no sense.

And now, in Israel these poor ignorant souls have this morning attempted a nationwide roadblock designed to protest their government’s policy of getting their nation vaccinated. As noted by Hana Levi Julian prior to the event:

(O)n Sunday, beginning in the early morning hours, as anti-vaxxers attempt to bring travel to a halt on the country’s major thoroughfares.

I don’t know how successful they were. But the that they are willing to disrupt the lives of so many others who had nothing to do with the government decision is nothing more than delusion based selfishness.

They may think they are saving lives. But they are doing the opposite. Good intentions are meaingless when damage to others. occurs. Disrupting the lives of so many people by virtie of erroneious information ought not be allowed by any civilized government.

In my view the protest leaders ought to be arrested and heavily fined – if not jailed. This is not a free speech issue. While Israel, much like the US, believes in freedom of speech. Free speech does not include causing harm when there is no fire. Even if the people screaming are deluded into thinking there is one. It doesn’t matter that they had good intentions. People might die because of them.

It frustrates me to see so many people being this stupid. They are being misled by the ‘alternative news’ with false or outdated data by people passing themselves off as whistle blowing experts against a biased medical establishment with a nefarious, self serving agenda. They may seem  scholarly and legitimate but they are kooks and charlatans that ought to be banned from all media platforms on the basis of causing great harm to the public.

OK. I feel better now. Off my soap box.