On a scale of what matters to the Jewish people in our day, this story might not rate that high to a lot of people. But I beg to differ. From an Associated Press story published in United With Israel:

A Florida high school principal who was fired last year after telling a student’s mother “not everyone believes the Holocaust happened” was rehired after a recommendation by an administrative law judge.

The Palm Beach County school board voted 4-3 on Wednesday to reinstate former Spanish River High School principal William Latson and give him $152,000 in back pay, the Palm Beach Post reported.

It is as impossible for me to believe that the Holocaust did not happen as it is for me to believe that the Mossad was behind 9/11. Or that it was the CIA that assassinated JFK. As ridiculous as those last two conspiracy theories are, questioning whether the Holocaust really happened  makes those theories plausible by comparison. I don’t see how any sane person, much less a high school principal can say that the Holocaust is merely a belief subject to challenge. The evidence is so overwhelming, that even saying that someone has the right to not believe it is antisemitic. Unless they are completely ignorant. And I doubt that William Latson is that ignorant.

I wonder if he would say the same thing to a parent that believed slavery never happened? That not every believes it did. If anyone believes that, I’d like to talk to them about a certain bridge in Brooklyn I’d like to sell them at a really good price. Slavery happened. So did the Holocaust. The evidence for both is beyond overwhelming!

Why is it so important to make a big deal about some small time principal in a small town? Because it plays right into the hands of all the antisemitic Holocaust deniers who say that Jews use the Holocaust as a pretext to extort reparations - huge sums of money that can be better used for their own nation’s needs. That at the core we Jews are a Cabal intent on controlling the world at the expense of honest hard working white Christians.

It is one thing when a bunch of fringe antisemitc racists say things like that. But when a supposedly respectable educator with no public record of atisemtisim says a parent has a right to deny the Holocaust he lends an aura of legitimacy to it - even of he doesn’t believe it himself. (And I’m not so sure that is the case.) That allows antisemitic fringe elements to show that their lies are not only reasonable but even mainstream.

There are a lot of innocent young people who have never heard of the Holocaust. Unless a school curriculum includes Holocaust studies most of them have had no exposure to it. It’s not exactly a trending issue in Twitter.

The Holocaust took place over 75 years ago. Survivors that can offer first person testimony are diminishing. As are the World War II veterans that liberated the Nazi death camps.  The youngest among them with any memory of it are mostly well into their 90s.  I also doubt the typical parent of today’s high school students ever discussed the Holocaust with them.

That makes it a lot easier for antisemitic Holocaust deniers to say that it is just one big hoax perpetrated by the Jews for nefarious purposes.

It will not be too long before eyewitnesses to that Holocaust will disappear. All we will have left is their recorded testimony and all the archival footage located in museums. The further away in time we get from that event, the more plausible Holocaust denial will become. And the more mainstream principals like Latson will be able to facilitate Holocaust denial as a mainstream belief!

This is why I am disappointed with the Palm Beach County school board’s 4-3 decision to rehire Latson with full back pay. 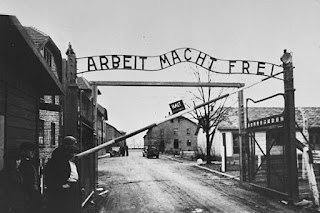 I realize that they are doing this to ‘avoid a costly court battle’. But since when does the truth have a price? Would the school rehire someone who said that not everyone believes slavery actually happened? Would they do a cost-benefit analysis to decide whether to fight that notion  or ‘avoid a costly court battle’? I doubt it. It would be wrong to do so. And it is just as wrong to treat the truth about the Holocaust that way.

The only justifiable way he could have been rehired is if had apologized for that comment after realizing the implications of it – adding that it was not his belief that the Holocaust did not happen. In my view he should have done that in the most public and dramatic way possible – perhaps in  in front of the famous ‘Arbeit Macht Frei’ gate at Auschwitz. Short of that, I would not give this guy the time of day let alone his job back with full back pay.