The ‘Gap Year’ and ‘Growth’ 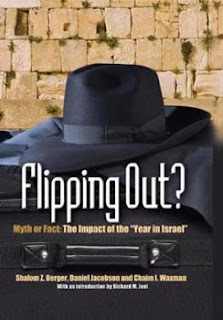 A Times of Israel article about choosing a Yeshiva or seminary for the so-called  ‘Gap Year’ got me to thinking about the value of sending a child to study in Israel  for a year (or more in some cases) after graduating high school.

The question is why should any parent choose to do this? This might seem like a silly question considering the popularity of these programs. But I ask it seriously. For me, popularity has never been much of a motivator. I have always needed to know the actual value of anything before I engaged in it.

So what is it? Is it about the increased level of Torah knowledge a son or daughter will gain by a year of intensive Torah study without the distraction of secular studies?

Well… yes. That is certainly part of it. For good students motivated that way, they will gain a lot. But I think there is another perhaps more important reason to send a son or daughter to Israel for a year. The level of maturity a typical high school student reaches in high school often leaves a lot to be desired. Puberty and peer pressure have a way of interfering with their development.  As does having lived in the cocoon of comfort their homes provided. Being away from home for a year does a much better job in that department. Provided the environment in which they will experience their gap year is a positive one.

The truth is that a lot depends on the student themselves. For a variety of reasons (such as being raised in a dysfunctional family) there are a few teenagers that have not developed good character traits. They will not only not flourish, they will be bad influences on others without the benefit of immediate parental guidance. Hopefully the Mechanchim there will spot it where it exists and can sort it all out before it does any damage. For most students, however, the environment can be a positive influence in developing a child's maturity.

There is a common word that some Yeshivos and seminaries use when  recruiting students for their gap year: Growth. Or more specifically,  growth in their Yiddishkeit. The idea being to develop a more mature and serious attitude about their religious observance. To paraphrase a famous line by the late actor John Houseman from the 1973 film ‘The Paper Chase’ – They come there with a skull full of mush; they leave thinking like a Jew.

This is all well and good. The question is what exactly does growth mean? And is this really what parents are looking for when they send their teenagers away for a year?

I think the answer for most of us would be, yes. We do want our children to take their Judaism more seriously. Growth is what those Yeshivos and seminaries ‘sell’ to parents seeking to develop maturity in their sons and daughters.

This is where a parent has to be careful. There is a phenomenon called ‘Flipping out’. This is not just becoming more careful about religious observance - as some insist that it is. While it is surely that too - it often means something else.

Instead of coming back with a more serious attitude about their Judaism - which is a good thing - they sometimes come back as entirely different people. Instead of following in the Hashkafos of their parents, they will adopt the Hashkafos of the Charedi Mechanchim that teach in a Yeshiva or seminary that recruits from modern Orthodox (MO) or Centrist high schools.

In other words - growth in some Yeshivos and seminaries means becoming Charedi. Not that there is anything wrong with that. But that is surely not what MO or Centrist parents intend their children to become.

The same thing is true in religious Zionist (RZ) Yeshivos whose Hashkafos about the the state of Israel more closely resemble those of Centrist and MO parents. But instead of developing strong support - ‘growth’ there might mean making Aliyah.

There is of course nothing wrong and everything right with making Aliyah. But any parent sending child to an RZ school must be aware that this is what they are selling. And be comfortable with the possibility that their child might end up staying there permanently – or return to live there soon after graduating from college or getting married.

Bottom line is ‘let the buyer beware’. Maturation and growth is a good reason to send a child to Israel for a year.  But it sometimes comes with unintended consequences. Make sure you find out exactly what a recruiter means by growth. Finding the right school whose Hashkafos closely match your own is something that is far too often overlooked at any level of education. Nowhere is that more important than during the gap year.