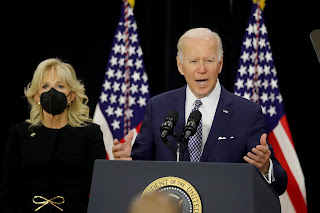 I found it a little odd that the President so forcefully rejected the ‘Great Replacement Theory’ - adding that White Supremacy is a poison! ...and has no place in America. Not that I don’t agree with him. I do. But in saying so he is suggesting that this kind of racist thinking has filtered into the American mainstream.

I completely reject that notion. Is there any sane American that believes in White Supremacy? Or that black people are inferior human beings?

Sure. There are racists in America. Racism has existed in the world since the beginning of time. But mainstream America has long ago rejected the idea that non whites are inferior human beings. Those that believe that are generally on the fringes of society.

What is true, however, is that these fringe extremists have felt empowered in recent years and are therefore more aggressive in spreading their racist ideology. With the help of the internet this has led to some horrific attacks against minorities by some of them. As was the case last weekend in Buffalo and a couple of years ago in Pittsburgh (among many other horrific events like that!). I nevertheless continue to believe that the vast majority of Americans are not in any way racist.

And yet by his comments, the President suggested that many mainstream Americans are. Which brings me to an interesting piece of news I heard this morning. The media reported a story about an AP-NORC survey that revealed one out of every 3 Americans believes in the ‘Great Replacement Theory’.

This is a theory that posits there is a conspiracy by the left (i.e. Jews) to replace the white Christian majority in America with Black people or other minorities. One may recall the march in Charlottesville a few years ago where a group of neo-Nazis and White Supremacists marched through that town carrying torches and shouting ‘Jews will not replace us!’

Was President Biden right after all?

I don’t think so. I reject the idea that one out of every 3 Americans believe in the Replacement theory and are therefore racist.

The aforementioned survey has redefined Replacement Theory to include those who believe Democrats advocate liberal immigration policies in order to pad their voter base.

I believe that it probably would. And there is nothing racist about that.

I do not believe that increasing their voter base is necessarily the only objective of the Democrats as some of right wing media personalities and even a few prominent Republican politicians have suggested. I believe most Democrats are sincere about opening up our borders to the promise of America. And provide opportunities to ‘the wretched refuse of our teeming shores’.

Most of these immigrants believe in the American dream. They want to improve their lives. Not take over the world.

Furthermore there is nothing inherently wrong with trying to increase your voter base legally. But the facts are what they are. A liberal immigration policy will surely do that. Believing that to be the case is not a racist conspiracy theory.

And yet this is exactly how media is portraying this. People that have these concerns – most of whom are conservative Republicans are painted as conspiracy theorists.

Why am I not surprised?!

Republican voters fear that their conservative views will increasingly be marginalized by a more liberal electorate.  That is not an unreasonable concern.  The media ought to stop characterizing conservative Americans as racists and conspiracy theorists.

What this is really about is the culture war between the conservative right and the liberal left.  And although I do not fully agree - I don’t think former Speaker of the House Newt Gingrich is that far off. Here is what he said recently:

The White Nationalist Replacement Theory - this is nuts. But there is a legitimate cultural – not racial - fight to be had about the degree to which the left seeks to erode American culture and the historic model of assimilation by allowing our legal immigration system to be totally overwhelmed.

Where I disagree is that I believe there is room for cultural diversity in this country. That is not what concerns me. What does however concern me about the culture war is  what our values ought to be; how will they be determined; and who will determine them.